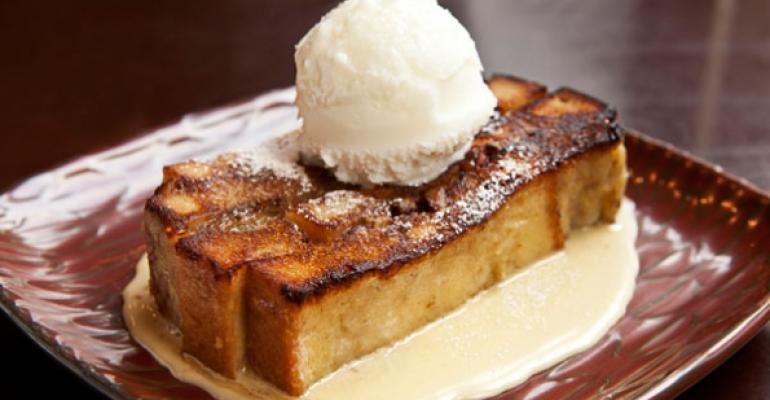 Six months ago, executive chef Jason McClure of Sazerac in Seattle was behind the bar talking to his staff about creating beverages with the same seasonality as the restaurant’s food menu when he got the idea to infuse spirits into food.

These days, McClure’s Banana Bread Pudding with Whiskey Sauce is among Sazerac’s most popular desserts. A riff on the classic Bananas Foster, McClure slices the bread and then layers it, like a dessert pate of sorts, with bananas, pecans and a traditional hard sauce made of whiskey, egg yolks and sugar. McClure attributes the dessert’s success to being on trend with the bar where he says brown liquors are “on fire.”

More and more chefs are finding dessert inspiration at the bar. Whiskey and bourbon have become among the most popular alcohols featured on dessert menus, according to Datassential MenuTrends. Whiskey, which includes the term bourbon and brands such as Maker’s Mark and Jack Daniels, has seen the largest growth on dessert menus in the last four years.

For Lenny McNab, chef at Kessler Canyon Ranch in DeBeque, Colo., it was a bottle of bourbon from the bar and some extra bacon fat from an elk tongue mincemeat pie that inspired him to create his Candied Bacon and Bourbon Frozen Custard. The indulgent, boozy treat — made with candied maplewood bacon, brown sugar, heavy cream, whole milk, egg yolks, maple syrup, vanilla nutmeg and bourbon — has been a huge hit with a guests at the resort, said McNab.

Also using bourbon to create a frozen treat with a kick is Milano-trained gelato chef Zbynek Mlynarik. Since December, Mlynarik, who works for My Vienna Gelato, has been whipping up a Bourbon Vanilla Gelato for Persona Neapolitan Pizzeria in Santa Barbara, Calif. The spiked gelato remains one of the restaurant’s most popular desserts.

“I wanted to provide an alcohol-based product, but it needed to be more of a classic flavor in order for Persona to move a lot of [it],” said Mlynarik. “People love it for two reasons… it tastes great and sounds great. We go through approximately one full pan per week (we get roughly 169 scoops out of a pan).”

Bourbon also shows up on the dessert menu at George Martin's Burger Bar in Rockville Centre, NY, where a rotating selection of Spiked Shakes has been selling well since they were added last summer. Currently on the menu is the Cinnamon French Toast Spiked Shake with Jim Beam maple bourbon, rum chata cinnamon cream liquor and vanilla ice cream topped with maple syrup drizzle and fresh whipped cream.

“We chose bourbon for the shakes because it is a natural pairing with vanilla ice cream,” said Suzanne Raspanti, Burger Bar general manager. “Vanilla bourbon shakes are the norm now … we chose the maple bourbon because we wanted to switch it up.”

While brown liquors are growing in popularity, liqueurs such as Amaretto, Bailey’s and Kahlua continue to be popular ingredients in desserts. According to Datassential, liqueurs are the most commonly-featured alcohol category on desserts.

Correction: June 4, 2014 An earlier version of this article incorrectly stated the company Zbynek Mlynarik is employed by and the headquarters of Persona Neapolitan Pizzeria. Mlynarik works for My Vienna Gelato. Persona is located in Santa Barbara, Calif.