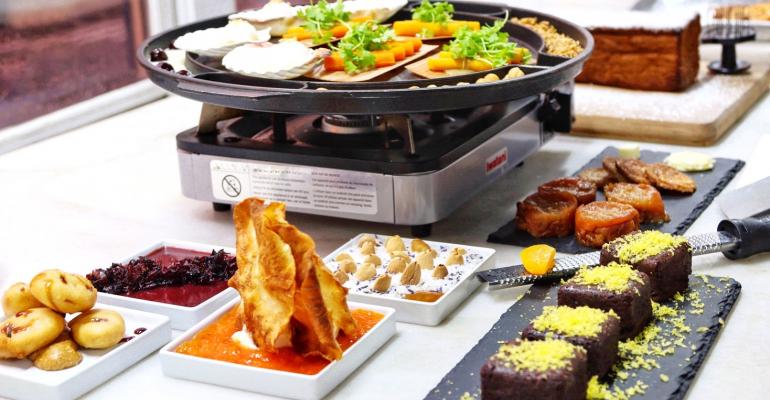 Some offer multicourse desserts, and others make pastry-influenced meals

Modern culture may dictate that dessert is eaten at the end of the meal, but not everyone is happy with that hierarchy.

Tired of their culinary creations being served last, some pastry chefs are creating multi-course experiences where dessert is the main — and sometimes the only — attraction. A spiced macaron with pumpkin butter and maple bacon jam was among the aperitif’s served at a Fall dessert “dinner” at Bastille Brasserie & Bar in St. Louis.

“Often, working in a restaurant, the pastry chef has to follow the style of the chef, so your desserts are just the end of a meal or menu,” chef Dominique Ansel said. “I wanted to create a new way to experience desserts.”

Since July 2015, Ansel, the pastry wizard best known for creating the Cronut, has been conjuring up U.P. (Unlimited Possibilities), dessert-only tastings held in the second floor pastry kitchen of his Dominique Ansel Kitchen in New York City.

Currently, he’s offering DDQ (Dominique’s Dessert Barbecue), featuring a selection of dishes inspired by communal courses from around the world, including Korean banchan, Middle Eastern mezze, Japanese yakiniku and whole roasts that are prepared tableside and all have sweet elements.

Among the many dishes that are part of the experience are king oyster mushroom fritters with homemade peanut butter, blueberries and pomegranate molasses; “scallop shell” île flottante with Champagne-poached pear and Tahitian vanilla crème anglaise; and, one of Ansel’s favorites, seared liquid caramel brownies with cured egg yolks grated on top.

Ansel finds his castella cake — a Japanese sponge cake — especially delicious and fun. It has grappa drizzled overtop, and guests hand-rip it and then dip it into a bowl of hot chocolate steeped with sweet corn.

“Guests have been loving the interactive element of this menu,” Ansel said. “Seeing their dishes being made and finished in front of them, getting to speak with our chefs as they’re preparing the dishes tableside.”

“We always do wine dinners,” Poteaux said. “This is my way of saying: ‘Now it’s all about my food.’ It’s a fun and interesting way to do things a little different.

But just because it’s dessert doesn’t mean it’s all sweet.

“I wanted to make sure I had balance,” Poteaux said. “I tried to give every dish a savory element.” The Fromage Blanc Island “Cheese Cake”, along with an amuse of Concorde grape sorbet with panna cotta, and a chef’s selection of petits fours, at ChikaLicious in New York City.

For example, the third course, a goat cheese cheesecake with orange, fig and local honey, was a play on a cheese plate.

Among the other dishes was a Honey Crisp apple Tatin with buttermilk ice cream, cider caramel gastrique and candied pecans, and “bronuts,” deep fried biscuits in the shape of donuts glazed with a mocha icing served with espresso gelato.

In response to the event’s success and guest requests, Poteaux plans to host another similar event in the spring.

At Endorffeine, a minimally decorated coffee shop in Los Angeles owned by chef Jack Benchakul, there is “9,” a Thai-influenced dessert experience featuring three courses and cocktails available for just nine guests at a time.

While others are newly making dessert the center of attention, pastry chef Chika Tillman and her husband Don Tillman have been doing dessert-only experiences since 2003, at ChikaLicious Dessert Bar in New York City.

“It’s a great place to check out for an adventure for your mouth,” said Angie Dykshorn, ChikaLicious’ general manager. “The intention is you don’t have to spend $300 in a nice restaurant to have a five-star dessert experience.”