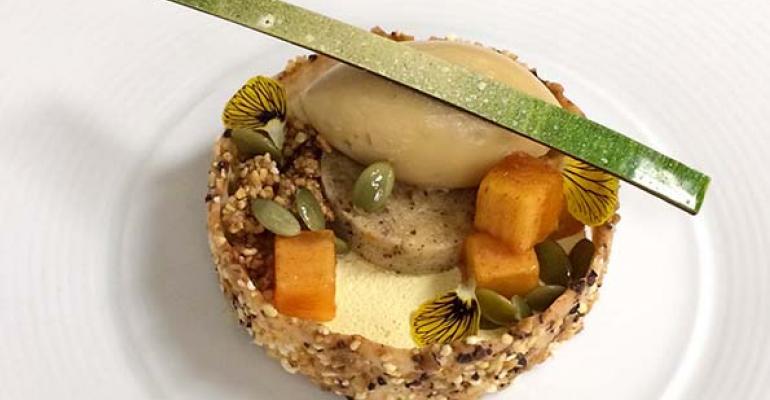 Taste and flavor play key roles in the foods consumers choose to eat, but so does another element: texture. The way foods feel in one’s mouth — chewy, crunchy, creamy — is thought to be a major driver of choice and an important factor in enjoyment and satisfaction.

“Large contrasts make a dish more vibrant and interesting,” said pastry chef Matthew Siciliano. “Finding the right balance between textures and intensities is important to achieving the right impact on a guest.”

Added to the menu in spring, Siciliano says the chicharron has held its own against perennially popular chocolate desserts.

At Orchids at Palm Court in Cincinnati, pastry chef Megan Ketover recently added to her menu a ginger sabayon mousse that hits on almost every possible texture. The dessert is mousse with a hazelnut financier, milk chocolate crunch, roasted butternut squash ice cream, vanilla persimmons and toasted pumpkin seeds, all wrapped in a cocoa nib and praline crispy wafer cookie that is shaped with a stencil while still warm from the oven.

“I like to use different textures in desserts to keep them interesting,” Ketover said. “When there are more textural elements, it is interesting how each bite is different depending on the composition of each ingredient.”

Ketover especially likes to give all of her desserts an element of crunch. For example, on her cardamom Basque cake with sweet corn ice cream and spiced blackberry jam, she adds a layer of marcona almonds coated in caramelized white chocolate and dried corn. She also likes to add honey tuiles on top of many of her desserts.

Marianna Reynolds, pastry chef at La Sirena Clandestina in Chicago, puts a gourmet spin on the classic Nestle Crunch Bar with her Spicy Chocolate and Cashew Magic dessert. It’s a combination of bold chocolate flavors with varying textures, as well as some piri piri pepper for a hint of heat. Reynolds layers cashew candy with piri piri-infused dark chocolate mousse and milk chocolate caramel. That’s all dipped in a chocolate shell and finished with seasonal fruit in demerara syrup.

Also offering a modern version of a crunchy favorite is Louis Tikaram, executive chef of E.P. & L.P. in Los Angeles. Tikaram’s Ginger Crunchie is a take on the Cadbury Australian Crunchie bar that he grew up loving. It’s made with white chocolate ginger ganache covered in milk chocolate and then rolled in crunchy ginger flakes.

“Desserts are always sweet, so balancing textures in a dessert is so important,” Tikaram said. “And we all know a crunchy outside with a gooey inside is about as good as it gets.”

Other chefs playing with crunchy textures include Jeremy Intille, pastry chef of The Original Dinerant in Portland, Ore. His Cheese-a-Saurus is a caramel and molasses cake with a spicy vanilla bean cheesecake dome, poached pears, a brandied caramel glaze and crunchy “dermal plates” made of French caramel and honey. Kim Darisse, pastry chef of Outlook Kitchen and Bar in Boston, is serving a Campfire Torte, which is composed of brûléed meringue and chocolate ganache on a graham cracker crust topped with marshmallow and charcoaled salt. It’s finished with a crunchy hazelnut lace.