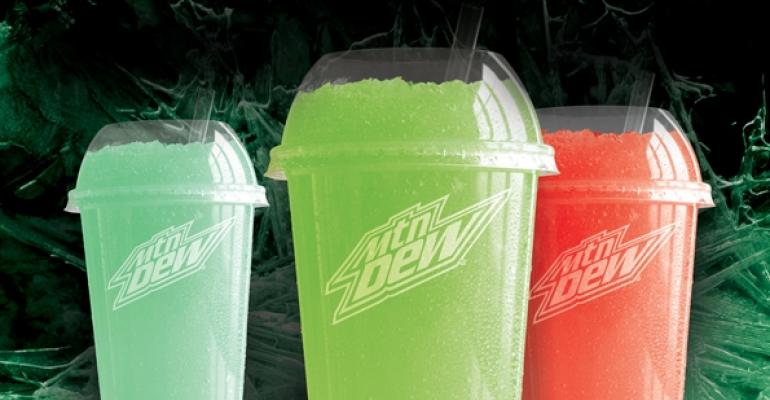 has launched a late-night menu to compete with Taco Bell, McDonald’s and Wendy’s.

Jack’s Munchie Meal features four options available from 9 p.m. to 5 a.m., served with “halfsie” fries (half seasoned curly fries and half regular fries) and a 20-ounce drink, priced at $4, or $6 with two tacos.

T.G.I. Friday’s has added three new Stacked Burgers, which feature two patties and a brioche-style bun, to the permanent menu.

The burgers are served with fries and priced within a dollar of T.G.I. Friday’s Signature Burgers, which are generally less than $10.

Following the success of previous seasonal offerings, McAlister’s Deli has introduced a turkey sandwich and a turkey salad, both available through Dec. 30.

has extended its line of proprietary Mountain Dew-branded products with two new frozen drinks. Mountain Dew Distortion Freeze adds sour lime flavor to the soda, and Mountain Dew Typhoon Freeze is the soda with tropical punch. They are available at the chain’s 5,700 domestic locations at a suggested price of $1.99 for 16 ounces and $2.29 for 20 ounces.

• Roast Beef Toasted Dip: Roast beef, melted provolone and horseradish mayonnaise on a white roll, served with au jus, priced at $6.25 for a six-inch sandwich and $8.25 for a nine-inch sandwich

• Triple Toasted Dip: Turkey, roast beef, pastrami, melted provolone and horseradish mayonnaise on a white roll, served with au jus, priced at $9.25 for a six-inch sandwich and $12.25 for a nine-inch sandwich.

Ted’s Montana Grill has added two new burgers and a salad at its 44 restaurants.

• No. 10 burger: A classic cheeseburger with housemade pickles, lettuce, tomato and the chain’s signature Ted sauce — made with mayonnaise, sour cream, green onions, Tabasco sauce and ranch seasoning. Prices vary by location, but it is priced at $13 with beef and $15 with bison in the chain’s Atlanta hometown. The burger was created last year for Ted’s 10th anniversary.

Ted’s has also added a hamburger that was a popular limited-time offer last year to its permanent menu, and reprised a seasonal dessert.

• Madison burger: Topped with crumbled goat cheese, baby arugula and Z-sauce (a raspberry aïoli) on a wheat bun, priced at $14 for beef and $16 for bison in Atlanta.

Mama Fu’s Asian House has moved several items from its semi-secret Black Market Menu, which it uses to test potential new items, onto its permanent menu. All the items are available through April 2014.

• Bánh Mì: A Vietnamese-style sandwich with pork tenderloin or chicken cooked in spicy hoisin sauce and served on a French baguette with pickled carrots, daikon, cilantro and cucumber slices, priced at $8.69.

The following items are on the fall Black Market menu:

• Miso Soup: Vegetarian shiitake mushroom broth with white miso, soft tofu, wakame seaweed and scallions, priced at $2.49 for a cup and $3.49 for a bowl

• Vietnamese Vermicelli: Thin rice noodles topped with vegetables or a choice of protein seared with lemon grass ginger sauce and served with greens, herbs, cucumbers and bean sprouts with Vietnamese dipping sauce and peanut sauce on the side. The dish is priced at $7.89 for vegetables; $8.69 for chicken, tofu or pork; $8.99 for beef; and $9.99 for shrimp.

Moe’s Southwest Grill is serving the winning recipe from its Raise the Salsa Bar contest, which it held on Facebook in summer 2012, until April 2014.

Sweetgreen, a 20-unit salad and frozen yogurt chain based in Washington, D.C., has added a new salad for October made with organic mesclun and shredded kale, local apples, pears, organic basil, organic white Cheddar and candied pecans dressed in balsamic vinaigrette. The salad is priced at $8.10 in Sweetgreen’s D.C., Philadelphia and Boston locations, and $9.10 in New York City.

Correction: October 10, 2013 This article has been updated with the correct number of Moe's Southwest Grill locations.