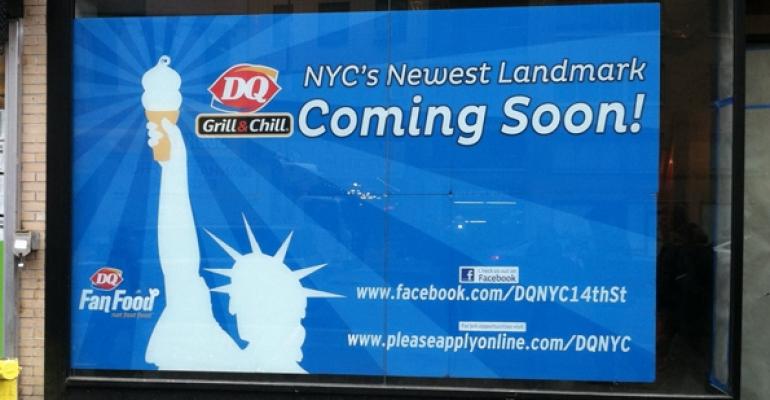 Much has been made of the negative effect severe winter weather has had on sales and traffic at quick-service restaurants this year, but chains like Dairy Queen and Rita’s Italian Ice are focusing on the other side of that equation as they prepare ambitious plans for growth and menu development for the spring and summer.

“It will be nice to kick off the season serving a lot of pent-up demand,” said Troy Bader, chief operating officer of Minneapolis-based Dairy Queen. “Consumers get very anxious to get their lives back to a greater sense of normalcy, and that’s important to the whole category, not just our brand.”

Jeff Moody, chief executive of Rita’s Italian Ice, agreed that most quick-service brands, especially treat-focused chains like his, should be ready to serve guests anxious to return to their dining-out habits once the long winter finally ends.

“Bad weather is our enemy, but cabin fever is our friend,” he said. “When we get a clear day, even if the temperature is 10 degrees below average, people are sick of winter and are coming to us.”

The executives spoke with Nation’s Restaurant News about their plans to fire up new development as winter thaws and gives way to their peak-demand seasons.

Bader conceded that a winter as tough as this one affected Dairy Queen, known for its Blizzard and other frozen treats. But he said the brand of about 4,500 locations in the United States and Canada outperformed its industry peers in January and February, “and the reason was food.”

The next domestic opening set for this spring will be a major milestone for Dairy Queen: the brand’s first restaurant in Manhattan, to open on 14th Street, a few blocks west of Union Square.

“This is very different for Dairy Queen than how we’ve developed for 74 years, which is one of the reasons we wanted to be cautious,” Bader said. “You have to have the right franchisee, and we’ve had opportunities in New York City in the past, but those operators weren’t aligned with our prospects for development.”

The operator for the Manhattan location, LSQ Foods, has signed a multiunit agreement for DQ Grill and Chill locations — not treat-only stores, which interested franchisees had pitched the company before — throughout the island.

The new site in Manhattan will have some new challenges Dairy Queen has not yet encountered in its typical store design, Bader said. For one, the in-line restaurant has no drive-thru, and it is the first Dairy Queen unit to have two stories. The chain had to change the design of its queue line before the cash register to maximize through-put in a more limited space.

The franchisees will test limited table service, where food is run to the upstairs dining area after guests order at the counter and find a seat.

“We’ll see how well it works over time,” Bader said, “but there are some unique opportunities for service that the franchisees are excited about.”

The brand opened locations last year on Long Island and in the Staten Island Ferry Terminal. New markets around New York planned for this year include Queens, as well as Rochester and Syracuse upstate.

“I like the heritage we have with 74 years, and the national ads we have make a big difference,” Bader said. “It wouldn’t be possible to advertise that way and develop quickly in New York City with only a handful of locations in the area. It’s been an incredibly important advantage in that market.”

Even though Rita’s was lapping a record promotion from last year, in which it introduced its mobile-loyalty program through the Punchh app, business for the week of the promotion rose 30 percent compared with 2013, Moody said. He added that Rita’s saw 18,000 new downloads of its loyalty app and reported 170,000 redemptions of a free “punch” when guests came to the stores for a free Italian ice.

“It was a great program again this year,” Moody said. “It was the first time we’ve done First Day of Spring in new markets like California and Utah. Last year we introduced the app and rewards program, and this year we introduced a new branded flavor, Starburst Cherry.”

Rita’s also repeated the Instagram photo contest for First Day of Spring, and more than 4,000 pictures of guests with their free Italian ice treats were uploaded, an increase of one-third compared with last year.

The chain plans to use the successful promotion week as a springboard into further planned menu development, such as the introduction of the Starburst Orange flavor on April 7 and an undisclosed new flavor set for May 7, which marks the brand’s 30th anniversary. Another promotion and flavor will debut on the first day of summer as well.

“We got off to a relatively slower start this year, because two-thirds of our stores are seasonal [and closed in winter],” Moody said. “That percentage is decreasing as we add stores in California, Arizona and Nevada, but the majority of stores are still in the Northeast. … We saw a slow build, but then with the advent of First Day of Spring, things are taking off for us.”

For near-term growth, an area developer will open his first unit in San Diego this month, with 70 more locations planned the next few years. More stores will open in Los Angeles County, Northern California, Minneapolis and Wichita, Kan., Moody said.