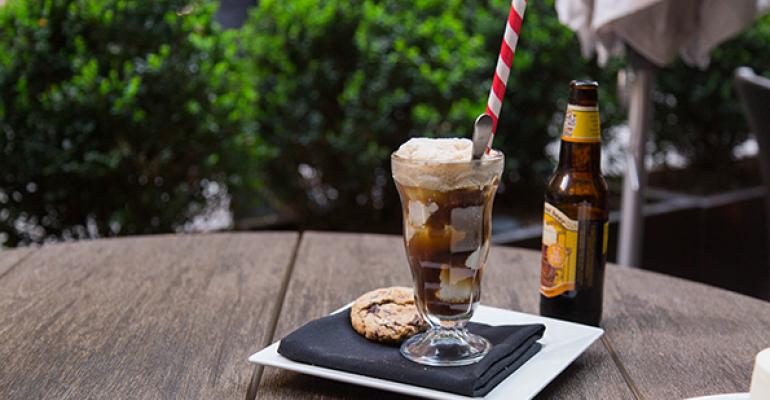 Drinkable desserts are growing on menus

Diners are having their dessert and drinking it, too

At restaurants across the country, diners are having their dessert and drinking it, too. That’s because a growing number of chefs — some questioning the need to use utensils for a meal's final course — are increasingly adding innovative, drinkable desserts to their menus.

“Personally, I'd drink dessert over eating one, especially if it has alcohol,” said Dee Ann Quinones, head bartender at Westbound in Los Angeles. “Westbound’s spiked shakes are like not needing to pick between a dessert or cocktail — you’re getting the best of both!”

Inspired by the proximity of their neighbors, Van Leeuwen Artisanal Ice Cream, and the SoCal heat wave, the team at Westbound, a new train- and travel-themed bar in Los Angeles’ Arts District, partnered to develop creative alcoholic shakes. Among the offerings available in August are the London Fog, an English-style shake made with Earl Grey ice cream paired with Westbound’s housemade lemon sorbet and Beefeater gin, garnished with lemon curls; and the Grasshipster, a play on the 1970s favorite Grasshopper cocktail, made with the Mint Chip ice cream, Fernet Branca, crème de cacao and crème de menthe, garnished with mint.

At Público, a South American and Mexican restaurant in St. Louis, chef de cuisine Brad Bardon collaborated with head bartender Nick Digiovanni to create the Boozy Rhubarb Paletta. It’s a multiple-treats-in-one dessert made by pouring strawberry-limecello over brown butter ice cream and then dropping in a rhubarb popsicle.

“It’s not only visually appealing, it allows guests to customize their experience,” said Digiovanni. “They can let it melt or enjoy the popsicle as more of a frozen treat. I think there’s a sense of nostalgia tied to cold, drinkable desserts.”

Indeed, many of the drinkable desserts on menus are fresh, often boozy, takes on classics, such as floats or milkshakes, which have been popular on menus for a few years now.

For example, on the menu at David Burke fabrick in New York City is the Grown-Up Float, a take on the classic root beer float. The sippable treat features Hudson four-grain bourbon ice cream that has hints of praline and vanilla. It's topped with a choice of regular or hard Coney Island Root Beer and served with a side of homemade chocolate chip sea salt cookies.

“I love grown-up takes on childhood favorites. There's something nostalgic and naughty about it,” said chef Zac Young, owner and pastry director at Craveable Hospitality Group, fabrick’s parent company. “Plus, at the end of a large meal, who really wants to chew? Call me lazy; I want to drink my dessert and then take a nap!”

Similarly, the culinary team at Del Campo in Washington, D.C., has a “Bite My Cocktail” menu, a selection of cocktails with edible components. Among the current offerings is the Postre, made with Jeremiah Whiskey, house-infused Oreo cream vodka, root beer ice, smoked cream and toasted marshmallows.

Other restaurants are offering up lighter versions of the float, such as WP24 by Wolfgang Puck, which is serving Champagne Floats, made with champagne paired with a choice of passion fruit, strawberry, or peach sorbet, at the rooftop patio of the Ritz-Carlton, Los Angeles. At Intro Chicago, executive chef Stephen Gillanders, inspired by a recent trip to South Korea, is serving a Blackberry Sorbet Float, made with fresh lychee and makkoli — a sparkling sake.

Hot chocolate, perhaps one of the most classic drinkable desserts, has gotten a makeover from several restaurants as well.

Last winter, the St. Regis Aspen Resort in Aspen, Colo., launched Hot Cocoa on a Stick, a two-person dessert that comes with six different chocolates on a stick that diners then dip into steaming cups of milk and stir, allowing the chocolate to melt for a drinkable indulgence. The popular, off-menu dessert is expected to return this winter.

“The whole juicing movement has accustomed people to drinking their food, so why not extend that to desserts?” Haddad said. “It may not be as healthy as juicing, but it sure satisfies the soul!"