In a bid to engage younger potential customers without overt advertising, limited-service burger chain Culver's is casting Instagram in a more prominent role in its social media strategy with 15-second animated parodies of classic movie and television shows.

“It’s definitely targeted at a younger guest,” Stidham said. “About 90 percent of all the ‘Instagram folks’ are under the age of 35, so we wanted to have some fun with the younger guests.” Instagram has more than 150 million accounts.

“We needed a place where we could connect with these younger customers without really advertising to them,” Stidham said. “We do that with popular culture, such as movies and TV shows.” 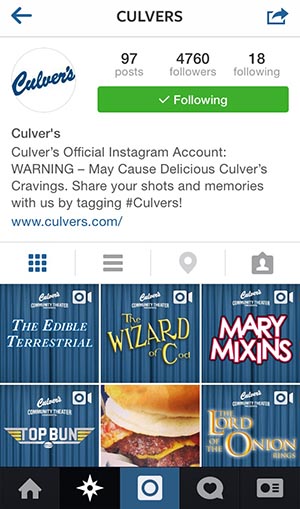 The Instagram-first strategy features 15-second animated videos. The 503-unit chain launched Aug. 25 and the last video in the series will post Sept. 26.

While younger customers aren’t the “sweet spot” of Culver’s demographic, which skews a little older, Stidham added, “we know that they increasingly are becoming that. A lot of Millennials are at the age where they are becoming parents. Obviously, the better connection we can make with them now, the better off we are going to be as a brand.”

Stidham, who has been at Culver’s for five years, said social media has changed dramatically in his time at the brand. It has gone from a basic Facebook page at that time with fewer than 100,000 likes, to more than a million. The company’s opt-in e-mail club has grown to more than a million members, Stidham said, and Culver’s opt-in text-message club, which is used more by local stores, has increased to nearly 750,000.

“We’re working all the different platforms,” Stidham said. “It’s fabulous to get to know our guests vs. advertising to them. It’s becoming a discussion now and is actually social.”

Social media has become an integral part of Culver’s marketing matrix, which includes traditional media and the company’s website, he said. As of Thursday, Culver’s, which ranked No. 14 in the NRN Social 200, and it has more than 4,700 followers on Instagram.

Stidham said Culver’s considers its targeted marketing demographic to be the “CMO,” or chief meal officer, of the family, and that typically is a young mother or father.

The company has been monitoring the “Culver’s Community Theatre” program. “From an early look in all channels, we had a half million users in the first three weeks,” Stidham said.

“It’s a small part of our overall strategy. Our social media presence continues to grow. We do feel like Instagram is a growing platform, and we do have to be involved with it. It has strong backers, and it’s in it for the long haul.”

While not on the Instagram platform, Denver-based Quizno’s Subs is doing YouTube movie parodies, such as one for the recently released “The Maze Runner.”