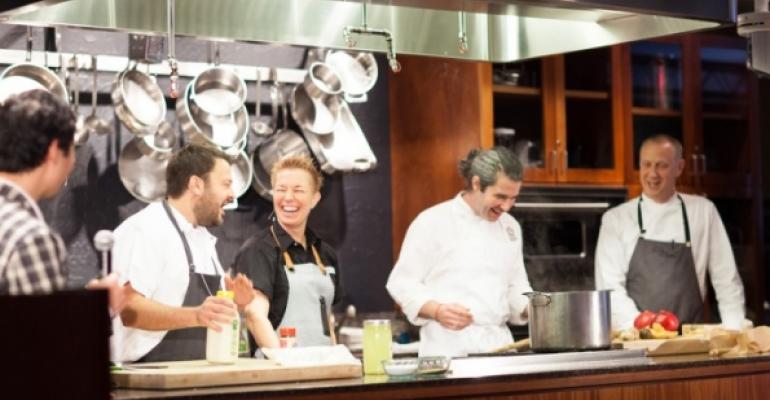 Gochujang and compound butter on display, along with simplicity, complexity and balance

The Culinary Institute of America’s annual Worlds of Flavor conference this year was April 20-22 and was titled “On Fire: Culture, Passion, Invention,” and there was plenty of each to go around. The confab, which has become a reliable leading indicator of emerging foods and flavors, also devoted attention to some larger issues.

Breakout ingredients in evidence included gochujang, the spicy, fermented Korean condiment that lent unexpected depth to gazpacho and livened up the compound butter atop rib-eye steak. The avocado juggernaut continues apace with an arresting twist: avocado leaf powder, which has an anise-like taste that enhanced Sopa Tarasca, a Mexican specialty said to be the forerunner of popular tortilla soup. Powders emerged as a means to deliver real flavor concentration, like the furikake powder made from fish-based Japanese seasoning that amped up the umami in a steak dish. Compound butters, which have been trending for some time, were in the spotlight and notable for their unusual add-ins. Besides gochujang butter, there was Mendocino nori butter served with grilled abalone, herring butter spread on grilled bread, and a crowd-pleasing barbecue butter made with barbecue drippings and herb ash and slathered over Texas toast.

Simplicity is a major menu trend in the making, the promise of which clearly resonates with consumers. It is also being warmly embraced by many chefs. Elena Arzak, the highly lauded chef-restaurateur from San Sebastian, Spain, forecasted the future of cuisine as “apparently simple,” which she defined as dishes that appear unpretentious to the diner, though they may be complicated to execute in the kitchen. Many chefs at the conference aren’t waiting for that future to arrive. Parisian chef David Toutain endorsed simplicity and encouraged using no more than two or three flavors to allow each to shine, while Peruvian chef Pedro Miguel Schiaffino claimed the secret to great ceviche lies in its simplicity, which he defines as no more than five ingredients. It’s worth noting that demand for simplicity is rapidly moving into the restaurant sector in the U.S. from supermarkets, where it has taken packaged-goods aisles by storm. Indeed, in March, McDonald’s registered the phrase “The Simpler the Better” for possible promotional use.

Not all culinarians take Arzak’s dictum to heart, though. In fact, she was joined on the program by several of her countrymen, who together comprised an entire galaxy of Michelin stars. They dazzled the audience with their culinary virtuosity and jaw dropping gastronomic invention, as seen in dishes like Crispy Egg Yolk with Warm Joselito Iberian Cured Ham Jelly, in which the raw yolks are tempura fried and served beside warm, ham-jelly-filled eggshells. The takeaway from these apparently contradictory currents is that the dining experience will likely become more bifurcated, with consumers gravitating between the two extremes to suit their craving, occasion and budget.

Chefs are speaking with a new voice that was clearly heard throughout the program. In his role as moderator, Chicago-based Rick Bayless noted a dramatic shift in the role of chefs over the past 60 years, as they become more active in their communities. The importance of community and family was echoed repeatedly throughout the program by chefs like Renée Erickson from Seattle, who exhorted operators to be generous and to help their employees grow; New Yorkers Jeremiah Stone and Fabian Von Hauske, who talked about the familial aspects of their tasting menu at Contra; and Toutain, who talked about collaboration among Parisian restaurateurs, who more freely share information on the best purveyors in order to support each other as well as the farmers. And in a truly startling break from tradition, Toutain said he closes his Michelin-starred operation on Saturday and Sunday, because he believes that “balance is important,” and he wants to spend time with his young son.

There’s one every year, an ingredient that seems to come from out of the blue. This year’s hands-down winner was celtuce, demonstrated by San Francisco chef Stuart Brioza. While its name appears to be a portmanteau of celery and lettuce, it’s actually a variety of lettuce prized for its thick stem, whose use as a vegetable is picking up steam with Bay-Area chefs.