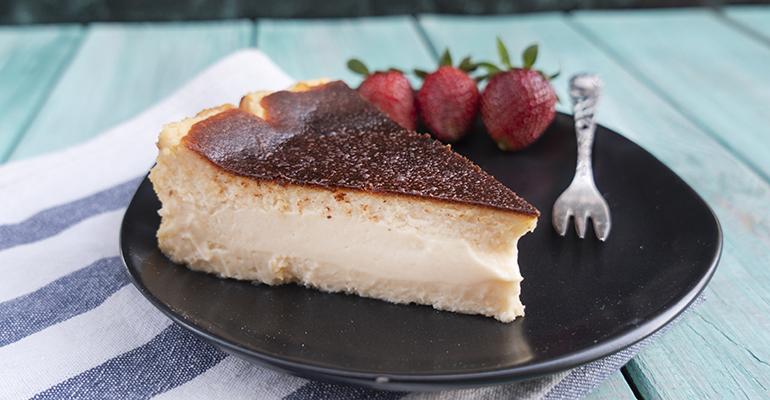 The classic is used to evoke candy apples, cheese plates and more

There’s something about cheesecake — the sweet, creamy, cheesy dessert with Greek origins dating back 4,000 years — that evokes a cosmic-like pull on people. One only need to browse Instagram to see the millions of posts featuring every flavor and style of cheesecake imaginable, including an obsession with Basque-style cheesecake with its signature burnt top.

On restaurant menus chefs are offering their own variations, from an elevated take made with chèvre to an unexpected candy-apple-turned-into- cheesecake. 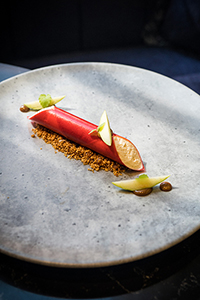 "The idea behind the dish was to combine some of the flavors of fall — candy apples, caramel apples and chai latte — into one dish,” Yurko said.

Yurko makes a red colored crisp to imitate the candy apple and fills it with chai cheesecake mousse. He rests that on a bed of a bed of pralines to evoke the peanuts usually found at the base of a caramel apple. Then he garnishes the plate with Granny Smith apple and dulce de leche, again imitating a caramel apple, and finishes it all with some lemon balm leaves.

“It tastes like an elevated caramel apple, with smooth filling and a crunchy outside. Warm and rich,” Yurko said. “The flavors are all relatable, but when the dish lands in front of a guest there’s a sense of, 'Oh, wow. I wasn’t expecting this!'."

Added to the menu in September, Yurko says the Candy Apple Cheesecake is now one of the restaurant’s most popular desserts.

Also conjuring the taste and flavor of familiar dishes in cheesecake form is Michael Neflas, executive chef of BOA Steakhouse in Los Angeles.

"One would probably never notice, but [our Nouveau Cheesecake] is based on a cheese plate,” Neflas said.

He starts with Mascarpone cheesecake, adds a smear of liquid cheesecake — made with cream cheese, sugar, milk, cornstarch, salt and eggs — and finishes it with a dusting of mimolette cheese. To round out the traditional components of a cheese plate, he includes fennel-infused honey and green grapes.

Carissa Waechter, baker-owner of Carissa’s The Bakery in East Hampton, N.Y., has received a lot of requests for cheesecake over the years, and, since her pies sell well, she decided to experiment and marry the two. The result is her Apple Cider Cheesecake, made with a reduced apple cider combined with a traditional French cheesecake base in a wheat pie crust with ground allspice, cinnamon and cardamom. To top it off, the dessert is baked Basque-style, which gives it the burnt and cracked top that’s so popular on Instagram.

Chefs are not only playing with added flavors, but also with the types of cheese in their cakes. 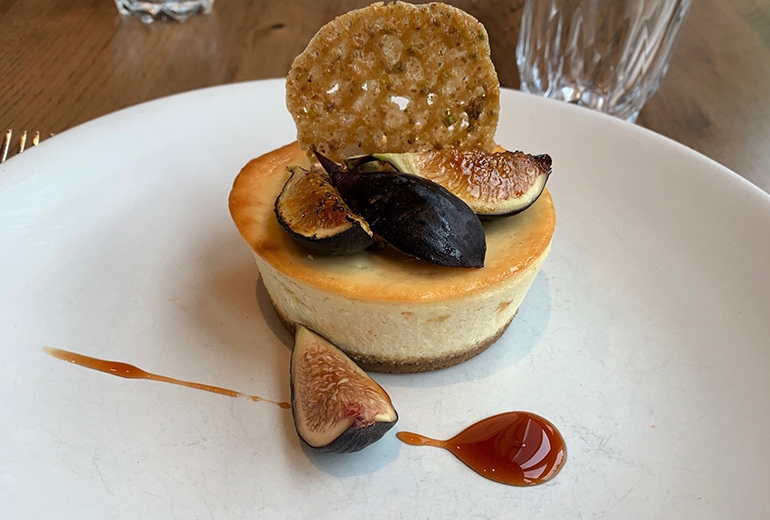 “[Our] servers get regular requests for cheesecake in the restaurant, so for fall I chose to build one around goat cheese and paired it with flavors that both enhance and compliment the earthiness of the goat cheese,” said Hannah Stachlewitz, pastry chef at King Tide Fish & Shell, a seafood restaurant in Portland, Ore.

Creamy and tart, Stachlewitz’ Chevre Cheesecake has a honey pistachio crust, is lightly bruléed and is served with a buttery pistachio lace cookie, toasted pistachios, fresh figs and a honey and red wine vinegar gastrique.

Karoum said he likes using Manchego, a cheese made from the milk of sheep from the Mancha region of Spain, because it has a mild but complex flavor without being overly sweet.

And yet, sometimes keeping it simple goes a long way, as with the Chocolate Dipped Cheesecake Pops at Woodpecker by David Burke in New York City. The pops are white or dark chocolate-coated cheesecake rolled in nuts and toffee served in a tree stand; each dessert comes with eight pops to share and a side of fresh whipped cream.

“The cheesecake pops are simply David Burke's ingenuity of making a shareable dessert that looks great, is photo-worthy and delicious,” said chef Carmine DiGiovanni. “Not a full dessert, just a simple cheesecake pop.”

A staple on the menu since the restaurant opened in 2018 — and a David Burke signature items at earlier restaurants of his — the pop tree remains Woodpecker’s best-selling dessert.