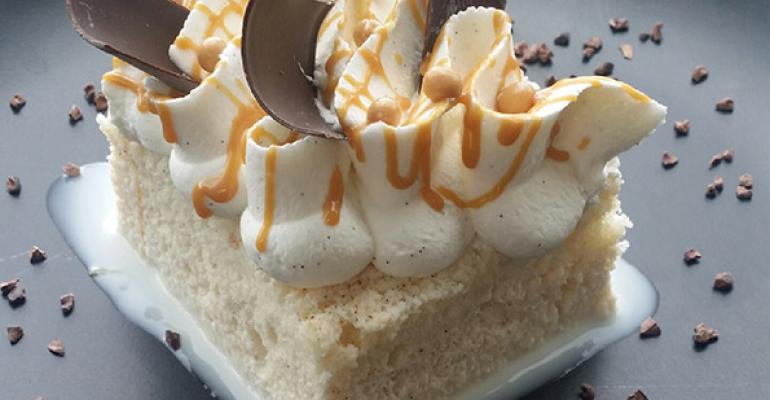 The cooked sugar is the No. 3 dessert flavor on restaurant menus

Caramel. Diners crave its sweetness and chefs love its versatility. It is the No. 3 dessert flavor on restaurant menus, second only to the ever-popular chocolate and vanilla, according to the most recent data from Datassential MenuTrends.

Not only is caramel a top flavor, but the cooked sugar with a sweet taste and appealing tan color has also been growing on menus, appearing on 10 percent more menus than it did just four years ago, Datassential reported. Fine-dining chefs seem to love caramel most, as the ingredient appears on nearly 50 percent of all fine-dining dessert menus.

"Caramel is definitely a key flavor in desserts … it's a core ‘go-to’ flavor right beside chocolate and vanilla,” said Jana Mann, senior director of Datassential MenuTrends.

“It's growing in the shorter and longer term as chefs continue to add it to menus. It's versatile, so you find it topping ice cream and pies, in ribbons through cheesecakes and brownies, in ethnic desserts like flan, as well as in specialty coffee drinks and milkshakes,” Mann said.

Among the many fine-dining chefs enjoying caramel’s versatility is John Delpha, who uses the popular ingredient in several desserts at the recently opened Rosebud American Kitchen & Bar in Somerville, Mass. Currently on the menu is a Jack Daniels Caramel Banana Parfait, a bananas Foster-meets-cheesecake creation with layers of no-cook cheesecake made of a cream cheese and pastry cream mixture, sliced bananas, graham cracker crumbs and a bourbon-infused caramel. Rosebud also offers a Turtle Pie, made with pecans, caramel, chocolate and whipped cream.

“Caramel is a higher form of sugar,” Delpha said. “It has so many layers of depth … it lends itself to a lot of adaptations.”

Caramel’s ability to take on all kinds of flavors has inspired a growing number of desserts featuring caramel infused with bourbon or other spirits. Bourbon caramel is found on about 2 percent of fine-dining dessert menus, and it has grown by 36 percent over the past two years, Datassential found.

For example, Nada, a contemporary Mexican concept in Ohio, with locations in Cincinnati and Columbus, offers a Warm Chocolate Torte with bananas Foster gelato and Meyer’s dark rum caramel. Nada chef and owner David Falk developed the chocolate soufflé-brownie mashup, featuring a custom-made gelato and rum caramel, for his chocolate-loving mother. The rum caramel, he says, was added to bring a little complexity to the dish as a whole.

“It’s one of our most popular desserts,” Falk said.

Several restaurants are using an unexpected touch of tequila caramel in their desserts, including La Sirena Clandestina, a rustic Latin eatery in Chicago, which offers a Tres Leches with mezcal caramel, whipped crème fraîche and cashew brittle. Similarly, Sol Mexican Cucina in Newport Beach, Calif., with another location in Scottsdale, Ariz., offers the Blondie La Guera, a white chocolate blondie with white chocolate and pecans, served warm with ice cream and cajeta envinada, which is caramel sauce with a touch of reposado tequila. Rounding out that dessert is fruit and toasted pecans.

Though often used in drizzle or sauce form, some chefs are exploring caramel in different textures.

Alina Bothen, the new executive chef at Red Light Cocktails & Dessert Bar in Washington, D.C., recently added a Caramel Panna Cotta to the menu. Bothen makes a super creamy caramel-flavored custard, then tops it with a layer of chocolate sauce, and garnishes it with brûléed bananas, bacon peanut brittle and whipped cream.

At the Four Seasons Resort Orlando at Walt Disney World in Orlando, Fla., executive pastry chef Rabii Saber makes a Tres Leches Cake with dulce del leche — which is sweetened milk cooked until it caramelizes — and toasted coconut that is topped with caramel beads, chocolate shavings and ribbons of caramel.

“The different textures — the crunchiness from the beads and the smooth flavor from the caramelized milk — enhance the taste of the dessert, ” Saber said.