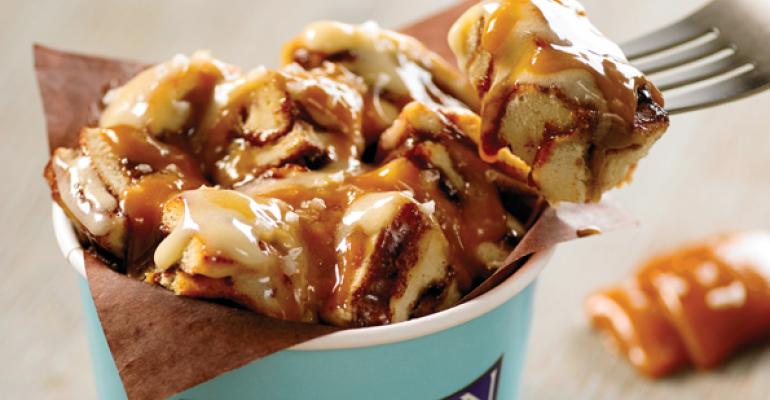 The latest sweet treats from Cinnabon, Dunkin’ Donuts and more

Pumpkin, cinnamon and apples will be available in abundance on dessert menus this fall, as might be expected, but less conventional innovations abound, too, as restaurants seek to distinguish themselves by straying slightly outside their customers’ comfort zones.

Cinnabon is jumping on the increasingly crowded salted caramel bandwagon this fall with its Salted Caramel Center of the Roll. Responding to consumers’ interest in portability, the dessert is bite-sized pieces of the soft, slightly gooey center of the chain’s classic cinnamon roll, topped with salted caramel frosting.

The dessert, served in eight-ounce to-go cups for a suggested price of $3.49, will debut on Sept. 8, and will be available at participating bakeries in the 540-unit domestic system through Nov. 2.

Taco Bell is continuing the nationwide rollout of another portable Cinnabon product, the Cinnabon Delight, which is a cinnamon-dusted doughnut hole filled with cream cheese frosting. An order of four pieces is now available for a suggested price of $1.49 at locations that sell breakfast. The item will be rolled out to all of the chain’s 5,695 domestic units in the fall, and it will become a permanent menu item.

Einstein Bros. Bagels and sister brand Noah’s New York Bagels have also introduced new a portable dessert this year: Pumpkin Bagel Clusters. The pull-apart dessert is tossed in pumpkin syrup and cinnamon sugar streusel and drizzled with cream cheese icing. The item will be available at both chains through Nov. 12. There are 815 locations in the Einstein Noah Restaurant Group.

Dunkin’ Donuts is bringing back its usual fall offering of pumpkin doughnuts, doughnut holes and muffins at its 7,306 domestic units through October. However, this year the chain is adding a pumpkin pie doughnut filled with buttercream, frosted with white icing and sprinkled with graham cracker topping.

Starting in October, pumpkin cake doughnuts will be on the menu at Astro Doughnuts & Fried Chicken, an independent restaurant in Washington, D.C. The desserts are frosted with a maple glaze and topped with crushed gingerbread cookies for $2.50. Chef Jason Gehring also is offering a $2.85 cinnamon apple doughnut, made with cinnamon dough and filled with apple compote. The items will be available through March.

Pumpkin will be in a frozen dessert at 600-unit Rita’s Italian Ice, which is offering Pumpkin Cheesecake Cream Ice from Sept. 4–24.

Chris Lobkovich, chef of the Library Bistro and Bookstore Bar in Seattle, is making a variation on pumpkin pie with his butternut squash crumble. “It’s pumpkin pie with squash, and it’s not pie,” he said of the dish, which comes with ice cream for $8. He’s also offering poached pears in coconut curry sauce, served in a tuile bowl for $12. The items will remain on the menu through early December.

Margaritas, a 24-unit casual-dining chain based in Portsmouth, N.H., will be offering a Plantain Split for three months, starting on Oct. 1. The dessert, which will be priced at $5.99, is comprised of two plantain cakes, made with plantains, spicy coconut sauce, flour and sugar. They sandwich toasted coconut ice cream and are topped with lime honey, chocolate sauce and whipped cream.

This story has been updated to reflect the following correction:

Correction: Sept. 5, 2013  An earlier version of this story incorrectly stated Cinnabon's domestic unit count and the availability of its Salted Caramel Center of the Roll menu item. Cinnabon has 540 domestic units; the item is available at participating locations.