The days of meatless burgers reminiscent of shredded cardboard are long behind us. Beyond Meat’s new line of hamburger cognates, made mostly from pea protein, actually tastes like meat, if not specifically beef. And Daiya’s “deliciously dairy-free” cheese, based on tapioca starch and pea protein, pictured, tastes not unlike cheese. The brand’s mushroom “pepperoni” is passable, too, as is Vegetarian Plus’s soy-based jerky.

Tamarind-flavored beverages were in abundance on the show floor, as was horchata. Guava beverages were abundant this year, just as they were last year. And hibiscus is now so widespread that Coca-Cola’s new Barrilitos soda line has a strawberry-hibiscus flavor, and PepsiCo’s Stubborn Soda line has an orange-hibiscus offering.

Stacked meats on vertical rotisseries with Mediterranean flavors were on display all over the show floor as this versatile, visually appealing offering moves further into the mainstream. Showing its versatility, Olympia Foods had chicken, beef/lamb, beef steak and pork gyros on display. KronoBroil had a gyro dip, made by mixing the chopped meat with feta, cream cheese, green onion, roasted red pepper and Monterey Jack cheese.

These Dutch sandwich cookies, stuffed with caramel or other melting fillings, were on display by several exhibitors, including Daelman’s, pictured, whose stroopwaffels are now served on domestic United Airlines flights. In the Netherlands, stroopwafels are placed over hot coffee cups, allowing the filling to melt.

Shops offering raw cookie dough are opening across the country, and David’s Cookies is joining the action with an egg-free — and food-safe — dough, ready for scooping.

All-natural protein bars were in abundance at the show, including Perfect Bar’s nut-butter-based offerings made with peanut, almond or cashew, as well as fruits, vegetables and honey. RX Bar uses protein from egg whites and nuts, sweetened with dates.

Cider meets beer with this beverage, for which fermented apple juice is finished with hops, the traditional beer flavoring. At the Bar Show, the hopped cider from Portland Cider Co., of Portland, Ore., stood across the aisle from a similar one from Stem Ciders of Denver.

The German region of Bavaria had a pavilion offering items like the Essendorfer company’s Genussschmelzerei — complexly flavored spreads, including one with seven kinds of garlic and onion, and another with pumpkin seed oil, pumpkin seeds, dried tomato and cheese. Meanwhile, at the Native American pavilion, exhibitors were displaying buffalo jerky, fry bread mix and popcorn. Hawaii had a booth with poke mix and kalua pork seasoning. And Michigan displayed potato chips flavored with cherries from the state. 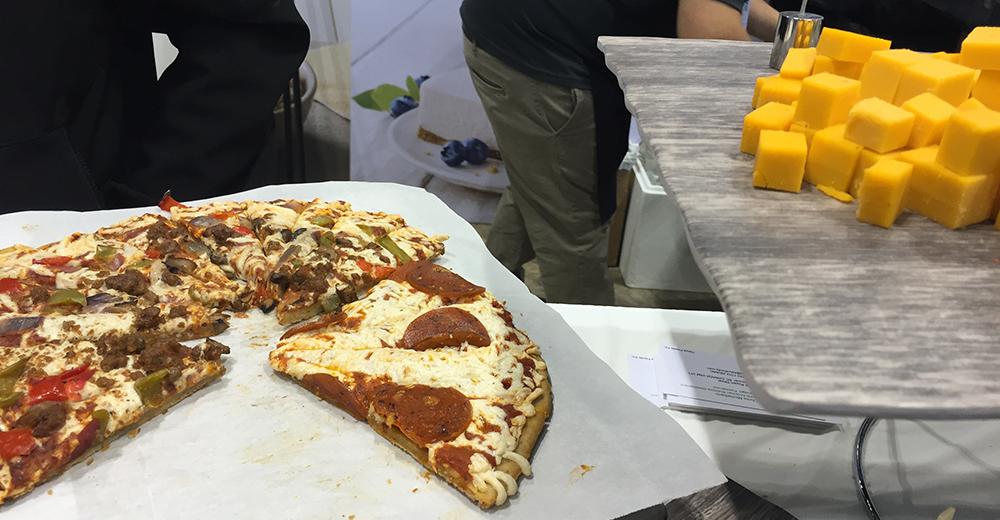