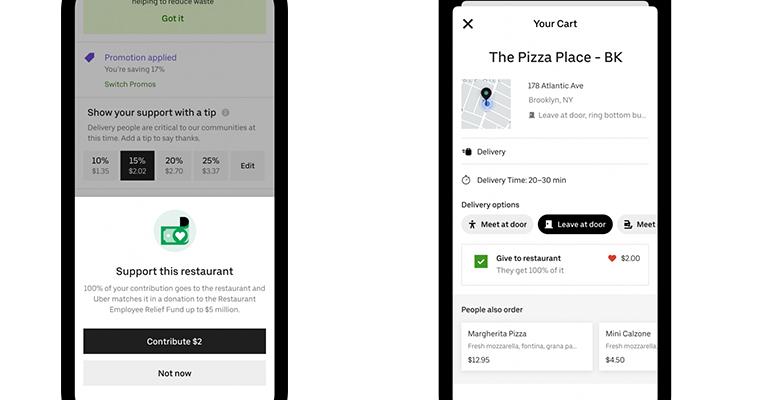 Uber
Restaurants on the Uber Eats platform will be automatically opted-in to the donation service.
Operations>Delivery & Takeout Solutions

Uber Eats adds an in-app donation button; independent restaurants on Grubhub to receive $250 each for ‘Supper for Support’ promotions.

The coronavirus pandemic has put a spotlight on the complicated relationship between restaurants and third-party marketplaces like Grubhub, DoorDash and Uber Eats. Long before restaurants were forced to close dine-in operations and pivot to off-premise, there was tension. These marketplaces can take as much as 30% commission from restaurants. Restaurants often do not retain customers’ data; the marketplaces do. But consumers love the ease of ordering from a sophisticated app, so many restaurants feel they must be listed on these platforms.

Now the co-dependent relationship is more complicated than ever. While these marketplaces have been offering support in the form of suspending some fees temporarily, a majority of their efforts have been focused on enticing customer orders.

Marketplaces have touted their restaurant relief, like when Grubhub announced it was suspending some fees for independent restaurants in light of the coronavirus pandemic. Still, restaurants have been less than relieved after reading the fine print on these deals.

The real problem, operators and others say, is that these marketplaces are not waiving fees for restaurants in their time of need.

The latest move from Grubhub comes after yet another controversy. Last week the company began promoting ‘Supper for Support,’ offering $10 off a $30 order from an independent restaurant. But restaurant owners were required to pay for the deal.

Love the part in the end-user agreement where GrubHub makes very clear that they're aware that they're doing absolutely nothing here: "Restaurant acknowledges that Grubhub will not match amounts funded by the Restaurant in connection with the Promotion." https://t.co/JDcIAG85Q1

On Thursday, Grubhub tweaked the deal. The company announced it would offer $250 to independent restaurants to enable them to give $10 off any order of $30 or more. The company is spending approximately $30 million through the ‘Supper for Support’ promotion, a news release noted.

“We anticipate this funding from Grubhub will help generate at least $100 million in restaurant sales,” the news release stated. “To date, participating restaurants in Grubhub promotions during the crisis have seen up to 30% increased sales.”

At Uber Eats, the first round of relief included the option to receive daily payouts rather than waiting until the end of the week to see revenue from deliveries. Uber Eats also announced it was waiving the delivery fee that customers pay for orders from independent restaurants and increasing its marketing efforts. They were not waiving fees that restaurant pay, however.

In a statement, a spokesperson for the company said, “we’ve waived the delivery fee for eaters in order to drive demand to local businesses (not restaurant commissions). This was an important decision as we believe the success of every restaurant depends on customer demand, which is why we are putting the majority of our efforts into driving orders towards independent restaurant owners and operators on Eats.”

Restaurants on the Uber Eats platform will also be automatically opted-in to the service. Any donations a restaurant receives will be made directly to a restaurant through its regular Uber Eats payment.

Uber will also match every contribution, up to $5 million, with a donation to the Restaurant Employee Relief Fund.