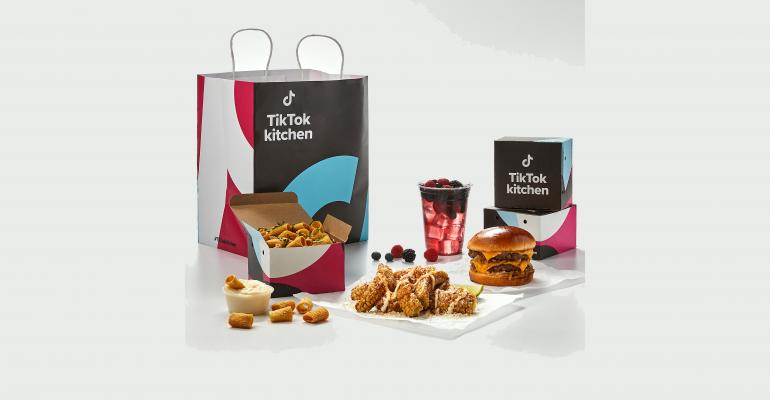 “I think that after a year or two of learning, and fabulous success with MrBeast, we understand the important issues of how to stay interesting to the consumer, how to constantly change, how to keep up awareness and TikTok as a platform answers all of that,” Earl told Nation’s Restaurant News.

This collaboration follows the record-breaking MrBeast Burgers virtual brand that Virtual Dining Concepts launched in February 2021 with YouTuber MrBeast, which opened 300 kitchens overnight across the country. The burgers sold out almost immediately because of MrBeast’s 54 million YouTube subscribers and the app shot to number 1 in the app store immediately.

Virtual Dining Concepts has been trying to recreate that buzz ever since.

With TikTok Kitchen, Earl and Virtual Dining Concepts (which he co-founded) will partner with TikTok stars as they go viral for food-related content to make the TikTokers’ recipes exist on a real menu.

TikTok, a social media app with over 1 billion users, provides a space for creators to post recipes, food hacks and more.

Think about the viral baked feta trend or whipped coffee that took over the internet at the beginning of the pandemic. That’s what Earl is aiming for with this, but on a restaurant menu rather than consumers attempting to make these things themselves at home.

The TikTok stars will be “partners” in the venture, but Earl would not disclose how proceeds would be split.

Internet trends usually disappear as quickly as they appear, but Earl has a solution for that: a constantly changing menu.

TikTok Kitchen’s menu will change quarterly depending on the trends, but some items will be mainstays on the menu.

“Obviously, if there's certain dishes, whether it's the baked feta or the smashburger… that just keeping selling, then I think we'll just build the repertoire and still keep some of the oldies but goodies on like, everyone loves the whipped coffee and the whipped lemonade,” said Earl.