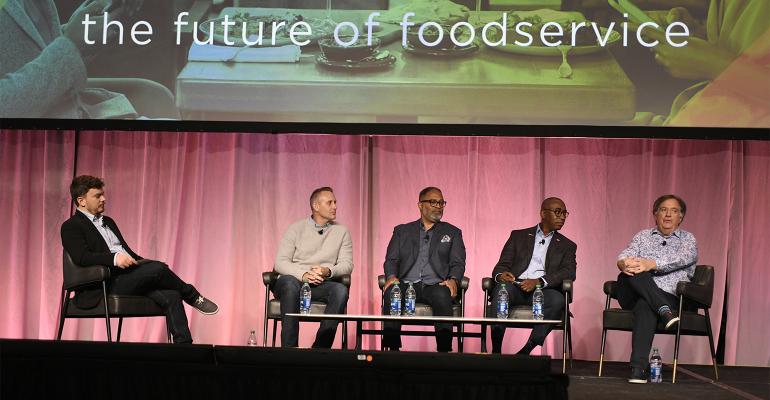 With innovation must come a focus on people, CREATOR Awards winners say

For restaurant operators, the new mindset is “how do we learn fast, test fast, scale fast.” But the focus on innovation must come with a renewed focus on people.

So said winners of the inaugural CREATOR Awards, who spoke at a panel at CREATE: The Future of Foodservice on Wednesday.

The award winners were selected by the Nation’s Restaurant News and Restaurant Hospitality editorial team for their innovation in certain categories.

Representing CREATOR of the Year winner Brinker International, which opened new doors of opportunity with the launch last year of the It’s Just Wings virtual brand, Wade Allen, Brinker’s senior vice president and head of innovation, shared how the casual-dining chain launched the delivery-only wings concept overnight in 1,000 locations. The move helped Brinker keep the lights on and avoid furloughs during the pandemic and has grown into a $170 million brand.

Key to the strategy was really understanding who the audience was: college-aged males who are into gaming and sports and appreciate the value of free fries, Allen said.

And the launch has opened doors for Brinker to launch more delivery-only brands to better utilize their Chili’s and Maggiano’s kitchens, but Allen said the company is being very strategic about making sure they don’t go beyond their restaurants’ ability to deploy.

“We don’t have an untapped ceiling” for virtual brands, he said. “It’s not [like] you can put 50 brands into an asset. You have to protect the core asset.”

But the diversity of thought that leads to such innovation can only be accomplished with a diversity of people, Allen said.

James Fripp, chief equity and inclusion officer for Yum Brands Inc., was the CREATOR Award winner for leadership, agreed saying, “connecting to different communities in different ways” is a form of innovation.

“What we need to think about innovation is how to take care of people as we do all of that,” said Fripp. “Because what we’re seeing is people are opting out.”

Fripp shared how Yum has been working to build more diversity into leadership and restaurant ownership across the global system and creating safe places for dialogue around the subject of inclusion. The multifaceted approach has included town halls, mentorship and inviting team members to make a commitment to equity and inclusion.

The company has also implemented “reverse mentorships,” pairing, for example, a white male leader with a person of color to build relationships in a more personal way, which the company calls ART: Authentic Relationships that build Trust.

Fripp said the company is also working to convey the importance of building diversity into the business, not only because consumer demographics are rapidly changing but also because the best and brightest graduates of color are being told by the top schools to look at the leadership of potential employers to see if people of color are represented.

“If not, you may really want to dig deep about whether that’s the right company for you,” he said.

Derrick Pratt, chief operating officer of Portillo’s — which won a CREATOR Award for reimagining its delivery model and building drive-thru sales alone to an average of $2.2 million annually — recently announced an initial public offering, revealing how well the iconic hot dog brand has done through the pandemic, recreating itself as an omnichannel operator.

Pratt credited the brand’s craveable menu, incredible volumes with delivery, catering and the strong drive-thru performance, and overall energy. Portillo’s was able to navigate the pandemic without layoffs and maintain its beloved legacy while becoming a brand that meets the needs of today’s radically changed consumer.

Portillo’s was forced to “learn fast, test fast, scale fast,” he said, in part because of the way the brand maintained an intimate relationship with guests and stays focused on learning.

“PR is better than advertising. That’s always been our philosophy,” said Earl, who also launched the celebrity-friendly Planet Hollywood and Hard Rock brands.

Virtual Dining Concepts is known in particular for its launch of the MrBeast Burger brand, a partnership with a YouTuber with millions of followers who is able to ignite an audience.

And it’s not just about celebrity associations but also IP, said Earl. Virtual Dining Concepts, for example, offers NASCAR brands through which consumers can order the food from specific regional racetracks while they watch the races at home.

This week, for example, more than 100,000 people ordered The Big One, an 8-ounce meatball with pork and cheese in the middle that is deep fried, covered in barbecue sauce and served on spaghetti, a famous option at Talladega Speedway, he said.

Earl said the key to innovation is understanding the changing needs of both consumers and potential restaurant workers who are saying “no” to working in a hot kitchen, standing for long hours or working every night. “No one knows yet where any of it is going to land,” he said.