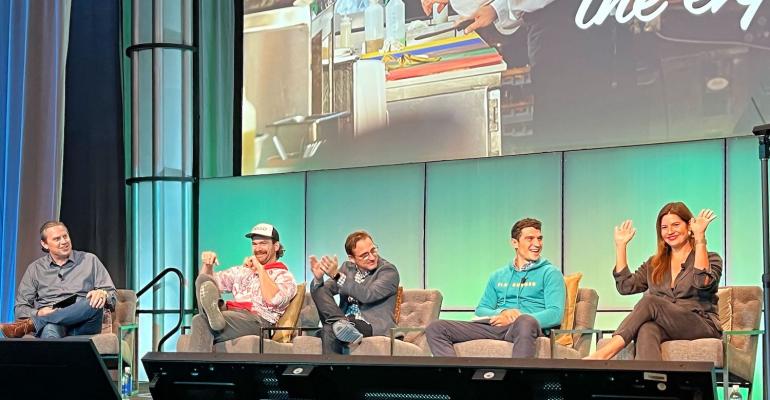 Leaders of HomeState, PLNT Burger, Project Pollo, and Sixty Vines share the keys to their success

Creating positive vibes and a great guest experience are essential to running a successful restaurant, according to this year’s winners of the Hot Concepts award, which the editors of Nation’s Restaurant News give to brands that have the potential to make a lasting impact on the American dining landscape.

During a discussion at the 2nd annual conference of CREATE: The Future of Foodservice, leaders of Project Pollo, Sixty Vines, PLNT Burger, and HomeState, all shared the points of distinction of their brands.

The panel was moderated by Andrew Smith, managing director of the venture capital Savory Fund.

“We’re sharing a unique story that you can’t find anywhere else,” said Briana Valdez, a Texas native who founded HomeState in Los Angeles to satisfy her own craving for the food and hospitality of home. The alumna of Thomas Keller’s Bouchon restaurant, who had also been mentored by P.F. Chang’s founder Paul Fleming, now has grown the concept to five units, providing not only Texas-style tacos with premium ingredients, but also a welcoming environment with great music and design meant to make people feel comfortable and welcome. Valdez said the mix of customers who visit the restaurants between 8 a.m. and 10 p.m., including families and young people as well as dressed up businesspeople having power lunches, creates great energy.

“Everybody told me at the beginning that you can’t serve tacos with this high level of integrity of food,” she said. But she saw what was possible working for Keller.
“I said I really want to provide this level of access to more people … and I’ve proven that you can.”

“It’s experience that today’s guest wants,” said Jeff Carcara, CEO of Sixty Vines, a six-unit chain by Dallas-based restaurant group FB Society that, true to its name, offers 60 wines out of kegs, allowing customers to taste wine for free and buy 2-ounce pours for as little as $4.

“Pre-COVID, there was a lot of chatter … [that] casual dining was dead. But really it’s transactional dining that is kind of dying on a full-service level,” he said. “Providing adventure and discovery every time you walk in our restaurant, that’s an experience and what guests are really looking for.”

Sixty Vines also has a sustainability mission that Carcara said resonates with customers: “For every keg of wine we tap we save 26 bottles from going into a landfill,” he said, adding that wine from kegs is more consistent.

“The last glass is as good as the first,” he said.

Pairing those wines with food from wine-growing regions from around the world also makes for great discovery, he added.

“Literally you walk in there and have a different experience every night of the week,” he said.

Sustainability is also part of the mission of the two other Hot Concepts winners, Project Pollo and PLNT Burger, which both serve only meatless food.

PLNT Burger (pronounced “plant burger”), had an early leg up by partnering with Whole Foods Market, where it opened its first location in 2020, as well as being founded by celebrity chef Spike Mendelsohn. But director of strategic marketing Jonah Goldman told CREATE attendees that the brand would have been successful even without its Whole Foods partnership.

“The brand itself is hot,” he said. “The partnership with Whole Foods certainly allowed us to do proof-of-concept in a way that I think was lean and cunning … but what makes us hot is the deliciousness, the chef-crafted part of our brand. We have some of the best burger chefs in the world who lend their culinary expertise to our menu,” he said.

“We aim to be the best burger joint in the world. It shouldn’t matter that we’re plant-based or animal-based at all. We just want to deliver a superior product.”

But PLNT Burger also has a mission that he said adds to its appeal.

“It’s uplifting. It’s fun and empowering for a guest to come and enjoy the classic comfort foods they know and love and connect to the environmental impact, to feel good about themselves physically, morally [and] economically.”

Playing on the word “hot” in Hot Concepts, he said “you can’t be the hottest girl at the dance unless you know what attracts other people to you.”

That means paying attention to customers and responding to their needs.

Project Pollo is a vegan concept founded two years ago in San Antonio, Texas, by Lucas Bradbury, serving a meatless version of chicken developed by Tindle and coated in proprietary breading and seasonings, along with salads, fries and oat-milk shakes. It has since grown to 15 locations and is on target to reach 20 units by the end of the year, and 12 units per year going forward, with about half of them being franchised.

“I think it’s a great time to be in this [plant-based] space. I think it’s the tip of the iceberg of where it’s headed. I think guests are looking to consume a variety of different proteins and I think encompassing what we have to offer [as part of their options] is an exciting thing.”