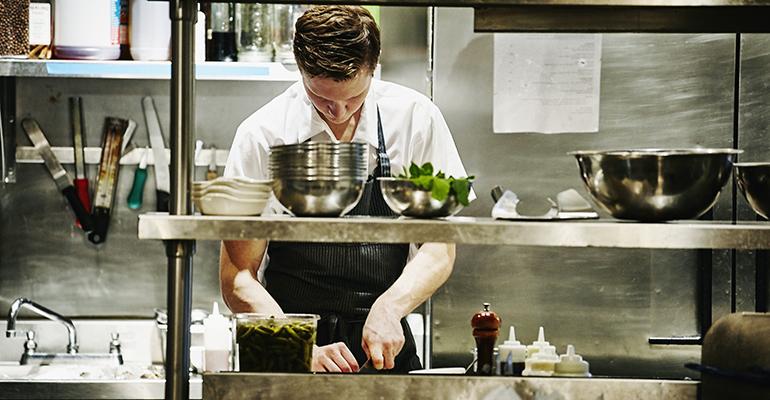 “Everyone on this call has made it through probably the toughest time in our collective careers and as an industry,” said Ajay Relan, co-founder of Los Angeles-based Hilltop Coffee + Kitchen.
Create the Future of Foodservice

For younger and smaller restaurant brands, those that have survived the 20 months of COVID-19 pandemic have emerged with changed business plans and fresh eyes on growth channels.

“Everyone on this call has made it through probably the toughest time in our collective careers and as an industry,” said Ajay Relan, co-founder of Los Angeles-based Hilltop Coffee + Kitchen, during a CREATE Live Discussion Tuesday with “Four Emerging Concepts Poised for Post-Pandemic Growth.”

Failing said Fields Good Chicken has seen its home base of New York City return after Labor Day, but the brand is still not “not we're not back to full pre-pandemic levels.”

However, the pandemic has helped Failing and his team create a new strategy.

“What the pandemic has done is it has shifted us toward looking at what I'm calling in omnichannel strategy,” Failing said. “So as opposed to thinking we need like 1,000 brick-and mortar-stores across the country, to scale the concept you need maybe a fraction of that.”

Failing said the strategy now is to have a brick-and-mortar store at the center “and then you have ghost kitchens, a food truck that serves as a marketing vehicle sort of surrounding your Main Street experiential store.

“One of the things we've done to add on to that is we’ve developed a packaging chicken product, which would be aimed at grocery stores and direct consumer,” he said. “It's a pre-marinated brined raw chicken you basically just take out of the bag, put in the oven and cook. So the idea is: We basically become your chicken brand. You can come into a restaurant and get rotisserie chicken. You can go online and order it, or you go to grocery store and buy and cook it yourself.”

The brand is also looking at suburban locations rather than urban center as workers have been slow to return to central business districts, Failing said.

Also thinking outside brick-and-mortar expansion is Tocabe in Denver.

“The pandemic and COVID really accelerated a lot of ideas that we had and what we wanted to build our concept toward,” said Tocabe co-founder Ben Jacobs.

“Where many restaurants focused on local first,” Jacobs said, “we have a philosophy where were native first, local second.

Tocabe purchased from Native American purveyors throughout the United States, he said. “We actually serve not only native cuisine but have produce and ingredients,” Jacobs said. “So we started something called to Tocabe Indigenous Marketplace.”

Customers can go to Tocabe’s online marketplace at its website, shop and individual ingredients used in the restaurants, such as rice, dried beans and bison.

In addition to ingredients, Tocabe is working on adding prepared meals to the webset, Jacobs said, adding: “Hopefully we will launch in 2022.”

Chandra, Tocabe’s co-founder, said the brand was looking to ramp up franchising in 2019, before the pandemic, and it created its franchise disclosure documents for that.

The eventual goal is provide a vertically integrated system for supplies, he said, but the company is “open to opportunities for company development.”

Bucher of Medium Rare said restaurant brands “have to learn from what we just went through.

Relan said Hilltop Coffee said the pandemic allowed the brand to “get our ducks in a row and reevaluate our programming, our menu, identify some inefficiencies.”

The to-go business has grown from about 10% of sales before the pandemic was declared in March 2020 to about 30% now, Relan said.

“That's kind of sticking around as folks are starting to come back,” he said.

Hilltop has recently partnered with an airport concessionaire to open a location in the Los Angeles International Airport Terminal 7 next year.

“We're really, really fortunate to make it through this and have a brand that's still resonating,” Relan said.

The full Live Discussion is available free online at the CREATE website.