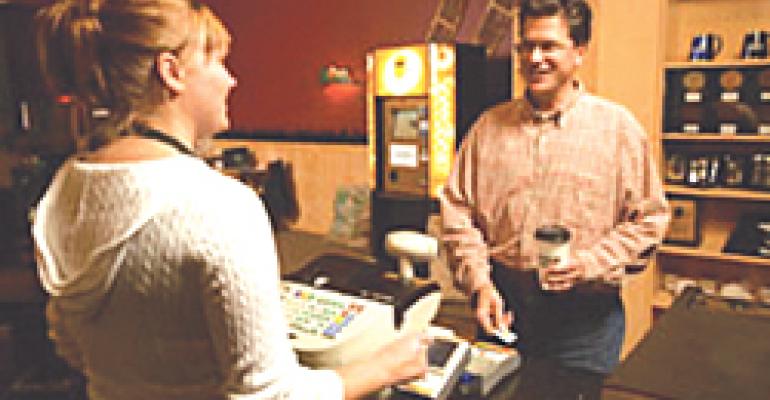 With its six stores located in the fourth-highest per capita coffee-consuming locale in the United States, The Woods Coffee needed a way to stand out from its competitors. The chain's Whatcom County home market in northwest Washington boasts a tech-savvy citizenry, so president Wes Herman decided to jump into contactless payment to accelerate transactions and eliminate the paper punch cards used for TWC's loyalty program.

"We wanted a new store experience that would quickly identify our customers, provide a gift card and prepaid service and increase business from repeat customers," Herman said. "We thought retail technology — specifically, a contactless payment and loyalty system — would offer a method that is viewed as fast, secure and convenient by our customers, while presenting a unique incentive to return."

In place for two and a half years, the radio frequency identification chip-based SpeedBean technology used by TWC now is carried by about 40 percent of the chain's customers, who, in aggregate, use approximately 7,500 chip-embedded keychain fobs. The identification-and-payment devices now are used for about 26 percent of all transactions, Herman said, but he indicated that pending marketing and other developments could drive that percentage higher.

Another statistic TWC officials like to share: SpeedBean users spend about 22 percent more per transaction than customers using cash.

"We're still seeing double-digit growth, and if that can be tied to this program, great, but it's difficult to analyze," Herman said of his chain's overall sales growth, while acknowledging that he is not certain how much of that gain is attributable to SpeedBean.

Herman rejected short-term gift card programs in favor of a more long-term program that would enable customers to continually replenish card balances. For usability purposes, he also thought it was important that the identification technology be available in a small fob format rather than embedded in a full-size payment card.

"People [patronizing] our industry don't necessarily carry a purse or wallet" when dashing in to get coffee, he noted. "It's easier for them to carry an RFID chip on a keychain."

Compatibility with the company's point-of-sale system was also high on the list of requirements for whatever technology or service was selected for the new payment/loyalty option; TWC soon would move from electronic cash registers to Vital Link POS from T3C Inc.

The Woods Coffee rejected larger contactless payment programs and private-label efforts to be the first customer for local start-up, Accelitec, co-branding that company's SpeedBean program aimed at Tier 2 and 3 quick-service chains. "This is an effort to lock people in to our system and be loyal SpeedBean users," Herman said, while getting in early on a program that likely will expand to multiple merchants.

Accelitec said SpeedBean compares favorably — in terms of speed, flexibility and costs — with national programs such as ExxonMobil's SpeedPass or Visa Wave.

SpeedBean works on any brand of standard stationary and mobile payment terminal with an integrated contactless RFID reader. The Accelitec package includes a supply of RFID-enabled key fobs and affiliation with the SpeedBean website and its real-time Web reporting tools. The associated fees run about $100 per POS terminal, 50 cents a fob and $100 to $300 per month in transaction fees. The Woods Coffee currently pays about $100 a month for transaction processing.

Customers wielding SpeedBean accumulate loyalty program points and can track their march towards incentive thresholds, as well as their account balance and transaction records, at the SpeedBean website, where they create a profile. Participants also can choose to receive phone receipts in the form of secure cell phone messages to verify each purchase, with the latter feature proving popular with parents, the vendor said.

Apart from relationships with Microsoft and Fujitsu, Accelitec officials said the vendor is expected to announce additional alliances with selected POS makers in the near future.

SpeedBean users at The Woods Coffee wave a fob near the reader, and their transaction seamlessly passes into the POS system. In turn, the POS system uses an encrypted, high-speed Internet connection to access the remote, centralized SpeedBean data center to verify funds and debit the purchase amount from the user's account.

When customers enroll, in store or online, they can choose to link SpeedBean to a credit card or bank account or use cash; for credit and bank accounts, they also can set up automatic account reloading once the balance falls below a certain amount. Accelitec handles the links to payment networks for credit and automated clearing house, or ACH, card replenishment transactions. Merchants choose which payment options to offer customers.

The SpeedBean process is fully PCI compliant, Accelitec said, with replenishment transactions handled in the  "card not present" mode. However, consumers can elect additional security, either a personal identification number code, or PIN, or a photo file embedded in the chip that displays on the POS during use. Web transactions use 128-bit encrypted secure socket layer, or SSL, connections, according to the vendor.

Accelitec created and deployed, for a limited time, a proof-of-concept "SpeedBean Station," or self-service kiosk that enabled consumers to acquire and load value onto contactless payment devices. It was intended to demonstrate the company's patented technology for the automated dispensing and activation of RFID tags, fobs, cards and stickers, as well as near field communications devices. Though the station is no longer in use, an Accelitec representative said it represented possible future applications of the company's technology.

The Woods Coffee soon will kick off its first major SpeedBean marketing campaign and plans to make more use of Web services-enabled reporting about program participants, chain sources said. On the technology front, SpeedBean's developer says it is ramping up for the coming proliferation of near-field communication-enabled cell phones, to enable transactions with a wave of the phone.

"There is a tremendous amount of excitement and enjoyment of the program because it's so unique and it's technology-driven," TWC's Herman said. "People understand technology here."