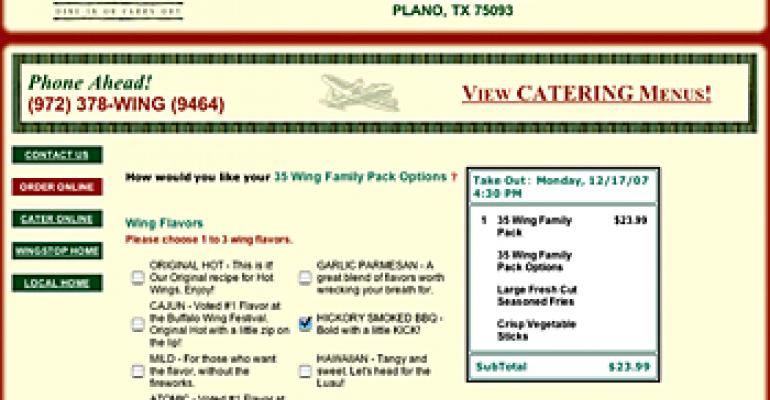 RICHARDSON Texas The Wingstop chicken wing chain is rolling out an online ordering system after a 120-store test in which the average online sale was roughly double the typical in-store transaction, the franchisor said.

The company said the new technology also supports a catering initiative and is tied to the chain's email marketing efforts.

Williams said that as of mid-December the chain was averaging from 150 to 200 online orders per day, with that volume continuing to build as more stores go live and more guests hear about the new order channel. He indicated that the daily average total number of orders during the first half of the week was in the 100- to 120-order range, while weekend days had an average of "close to 300 [orders]."

Nearly all of the Wingstop restaurants accepting online orders are receiving them via a dedicated fax line, Williams said. A few stores are using or testing Internet Protocol printers, he added, and the chain later may test the integration of LetsGet.Net's technology with in-store point-of-sale systems.

Richardson-based Wingstop said the rollout of the technology from LetsGet.Net to all 600 Wingstop stores would extend through 2008.

Wingstop sources said a separate catering menu built into the online order system, dubbed "eWings" by the chain, has increased business by making it easier for large groups to place orders. Catering combination packs have been designed that include enough wings and sides for between 25 and 200 people, they said, adding the largest catering ticket to-date was $1,731.98.

"We love the upselling and suggestive selling built in [to the online interface], because the system always suggests the perfect compliment to each order and is 100 percent reliable," Wingtsop's Williams said.

Williams also pointed to the impact of food photography and its placement at the website, estimating that 60 percent to 70 percent of the orders come from the combination packs featured with images on the right side of landing page. One out of four customers, he added, takes the automated suggestion that they add a half-dozen dinner rolls to their order.

Wingstop declined to reveal the cost of deploying or maintaining its online ordering system.

LetsGet.Net president Jordan Kimberg said that, in general, initial setup fees can range from $500 to $5,000, based on whether a client needs a website or website improvements or desires integration with a point-of-sale system; the monthly subscription rate, which may be bundled in with other services, ranges from $50 to $150 per restaurant per month.

Franchisors may purchase a site license that effectively lowers the monthly subscription fee that franchisees pay St. Louis, Mo.-based LetsGet.Net, whose other clients include branches of the Cecil Whittaker's Pizzeria chain of St. Louis and Murraysville, Pa.-based Fox's Pizza, Kimberg said. He added that the company's technology is fully integrated with DiamondTouch Inc.'s POS platform.