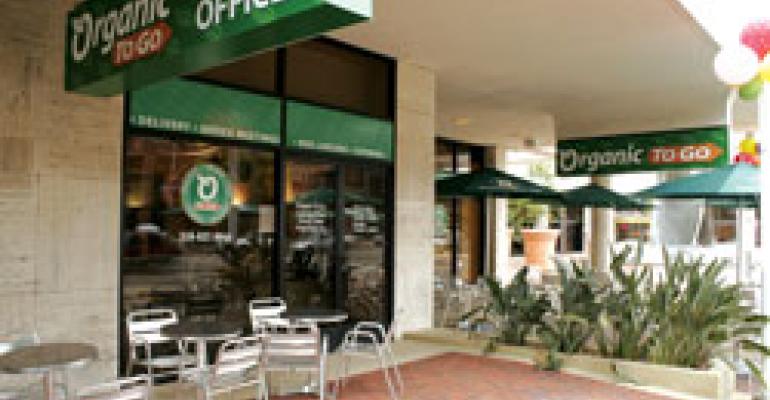 SEATTLE Organic To Go has closed about half of its 33-unit cafe chain and will focus on building its organic wholesale and catering business and offering more “food forward, chef-driven” menus, officials said Tuesday.

The move for the Seattle-based wholesale, catering and retail chain is part of an ongoing overhaul since the company deregistered its common stock with the Securities and Exchange Commission in March and shareholder Inventages became the primary stockholder. Following the transaction, Richard Cervera, a former executive with the Taco Cabana brand, was named Organic To Go’s chief executive, replacing Jason Brown, who founded the company in 2004.

Inventages, an investment arm of Nestle with offices in Switzerland, the Bahamas and New Zealand, focuses primarily on health, nutrition and wellness brands. The firm’s portfolio includes Honest Tea and The Healthy Beverage Co., which makes the Steaz line of organic energy and soft drinks, according to the investment firm’s website.

Organic To Go was the first fast-casual restaurant chain to be certified organic by the U.S. Department of Agriculture. The company’s sales are primarily attributed to its wholesale operation, supplying organic fare to about 170 foodservice outlets, including hospitals and college campuses, and corporate catering.

The wholesale and catering operations will continue to be the emphasis going forward, said Michael Johnson, Organic To Go’s vice president for business development.

Johnson said the company is “refining” its retail concept and that 18 cafe locations continue to operate in the markets of Seattle, Los Angeles, San Diego and Washington, D.C.

The company has hired two chefs to revamp food offerings, including Kenley Cervera, who is the son of chief executive Richard Cervera, and Stephen Joseph, both graduates of the Culinary Institute of America. The younger Cervera worked previously at the restaurant Press in St. Helena, Calif., and BLT Steak in New York. Joseph worked at the New York restaurants Daniel and Cafe Boulud.

Initially, Organic To Go was designed to offer an organic alternative to traditional fare, Johnson said.

“It was about turkey and Swiss and ham and cheese,” he said. “Now we want the food to have more flair.”

At Organic To Go’s newest unit in Bethesda, Md., which debuted in July, the younger Cervera and Joseph are testing menu items with such touches as salads with “white balsamic and black-truffle vinaigrette instead of the standard Thousand Island or ranch dressing,” Johnson said.

Johnson said the menu is still being tested, but the dishes that remain likely will be rolled out to other locations within the next two months. The new dishes also will be “cross pollinated” within the catering and wholesale options.

Organic To Go is not currently planning to add more retail locations, but growth is an option once the brand has been refined, Johnson said.

“We need to make sure we’re in a mode to profitably replicate it,” he said.