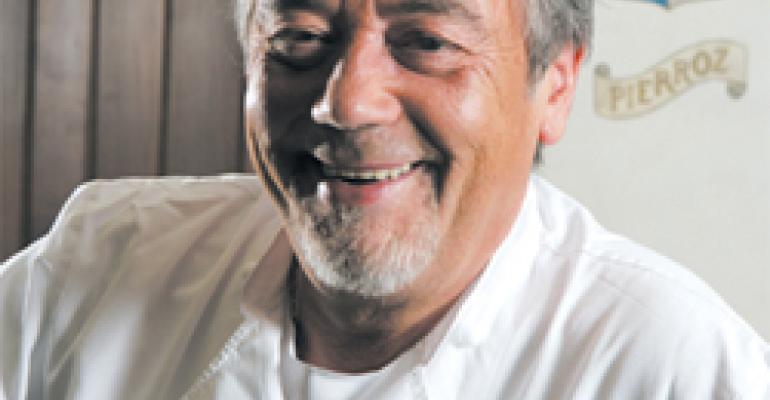 UNDER THE TOQUE: With retirement looming, Pierroz leaves his legacy in the kitchen

When Roland Pierroz, chef-owner of the Hotel Rosalp in Verbier, Switzerland, retires later this year, the property will turn over to new owners who have plans to turn the Alpine ski village hotel into a five-star luxury resort.

But even as the look of the property evolves and new chefs step into the kitchen, Pierroz’s legacy at the hotel—and in the Swiss culinary scene as a whole—will likely endure.

After decades at the Hotel Rosalp, which his family has owned since the late 1940s, Pierroz has accumulated numerous honors for his role in the development of modern Swiss cuisine. It was in the 1970s, after his apprenticeship at the Beau-Rivage Palace, that he first began to make his mark. With his mentor, Fredy Girardet, Pierroz pioneered a fresh, modern approach to cooking that challenged the traditional methods that reigned at the time.

Now, as his career at the Hotel Rosalp winds down, Pierroz looks forward to spending more time with friends and pursuing his hobbies, while also looking back fondly on his time in the kitchen.

What inspired you to become a gourmet chef?

Passion for cooking and for work that is done well. I had a passion for nouvelle cuisine and for doing things differently. [In the past], things were done very conventionally.

You took over the business from your father in 1969. How was the transformation?

There was not a lot of change.

Who was your mentor?

Fredy Girardet, who was the greatest Swiss cook at the time—of all time, probably. We were among the first in Switzerland to [pursue modern culinary techniques].

Tell me more about how your approach impacted cuisine in Switzerland?

We were the first ones to do modern, Michelin-style cooking, using exceptional products and refining the way they were used and presented. In terms of influencing Swiss cooking, much of that I did on my own, but we were there in the ’60s and ’70s to work with exceptional products and to create these kinds of dishes. Me, Fredy, and Hans Stucki. We began everything together. In those days, it was really challenging. It was incredibly difficult to get good products. We didn’t have fish. We didn’t have anything. Fredy Girardet put pressure on the markets—on the fish mongers and meat packers and butchers—to raise their standards. We began everything together. We advanced quickly, and after that there were others, trained by us. The result of all that is that today, Swiss cooking is at an exceptional level.

Tell me a little bit about the process of creating new dishes.

I always draw the dishes before I cook them. I have paper everywhere, in my office, in my house. The graphics of what I do are very important. I design the dishes on paper—which products, which style of sauce, which presentation. Then I get the produce and work out the realization of the design in the kitchen. Sometimes I have to wait until I find the products or the product is not in season when I design the plate. I always loved design. I have been like that my whole life.

How do you work with the seasonal changes in Verbier?

If you had to compare the running of a successful kitchen to a sport, which one would it be and why?

It would be a team sport. We are 72 employees and 25 cooks. It is an extraordinarily difficult exercise to achieve harmony in what we are doing and maintain quality.

How would you describe the experience of working with your family from generation to generation?

Title: chef-owner, Restaurant Pierroz at the Hotel Rosalp in Verbier, SwitzerlandBirth date: Aug. 26, 1941Hometown: Martigny, SwitzerlandEducation: apprenticeship at the Beau-Rivage Palace in Lausanne, SwitzerlandCareer highlights: taking over the family restaurant in 1969; being awarded a toque in Gault Millau in 1972 and rated 19 or 20 since 1992; acting as president of Relais & Châteaux for Switzerland and creating annual Relais & Châteaux Review; acting as vice president of Grandes Tables de Suisse Gourmet Restaurants Association; presiding over the tourism office in Verbier; being named by Larousse Gastronomique in 1996 as one of the greatest exponents of creative cuisine; earning one Michelin star

It was not a choice; it was a situation. To work with one’s family, it is a state of mind. You know you have to do it, after that you find a way that permits everyone to do their work well and to live together correctly.

You’re retiring from your position at the Rosalp. How did that come about?

I sold the Rosalp in April to someone who will invest a lot in it. They are going to really develop the hotel and spa, put in a pool and so on. It is very high end what they are planning.

What has been the greatest reward of your career?

The contact that we have with our clientele has been impressive and rewarding.

To always do everything a little bit better, never be satisfied, but rather always look for perfection.

What was the best piece of advice you were ever given?

Generally it’s me who gives the advice!

What is next on the horizon for you?

Boating, hunting, riding, seeing my friends, which I never have the time to do, traveling.