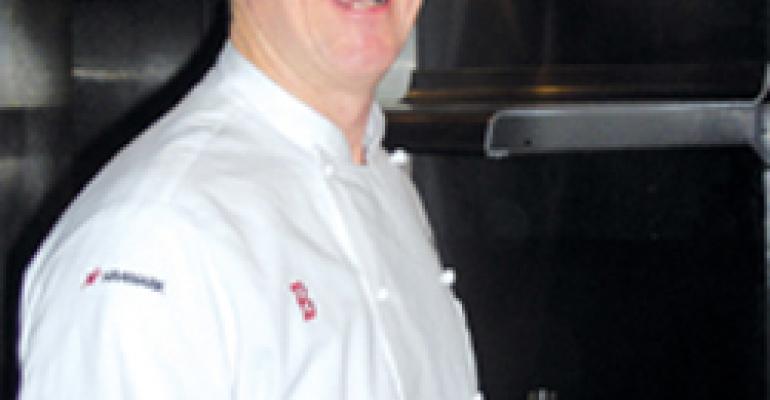 As baseball season begins, at bat for the Boston Red Sox again this year is Ron Abell, executive chef at Fenway Park.

Contract feeder Aramark Corp. hired Abell, a former chef at such renowned New England fine-dining restaurants as Biba and Icarus, last May to bring an added sheen to the foodservice at the fabled ballpark. As a result, he has brought more local and sustainable items not just to suite holders, but to the general public as well.

Abell hasn’t forgotten that many fans just want to have fun and experience the burgers, hot dogs and Buffalo wings they’ve come to love, but he says baseball fans have more sophisticated tastes than ever before. His plan to capitalize on that desire for better food has already led to such menu additions as organic beets served with artisanal goat cheese, and asparagus soup.

Why did you decide to trade in your white tablecloth for hot dogs and beer?

It’s different from anything I’ve done before, but Aramark has been great. They’ve given me the freedom to design great menus for Fenway’s premium side—the EMC Club, the State Street Pavilion and the luxury suites. I was lucky to work in fine-dining restaurants, in what is considered more of a celebrity-type of job, but Aramark really came to the plate when they offered me this position. It had a lot to do with my livelihood, the money was good, and though it’s been a tremendous change, seeing what I have to work with here is tremendous. And change is good.

Career highlights: working in such fine-dining establishments as Icarus and Lydia Shire’s Biba, both in Boston; joining the staff at Fenway Park last year

Did you think the switch would be as seamless as it has been?

At first I was a little skeptical. I made only a few key changes. I’ve been able to bring in some local farmers and cook more seasonally. I don’t think we’re reinventing any wheels here. It’s all about the execution. We’re using upper-echelon purveyors at Fenway, and when you have good products to use, you don’t have to do too much to them. The ingredients on the plate speak for themselves.

What items have you introduced that are beloved by the fans?

We’ve got a New England lobster roll that’s sold all over the park. We started offering it during the middle of last season and everyone really liked it. It’s got lemon, mustard and mayonnaise in the salad mix, a little bit of celery, and some fresh chives and scallions scattered on the top. It’s served on an 8-inch hot dog bun with potato chips and a side of slaw. We’ve told all the sous chefs to put unsalted butter on it and grill it properly so it’s all golden and crusty on the outside. It’s pretty competitive with what you’d find around town. The price range is similar, anywhere from $17 to $23 depending on the size. In the premium areas we serve it on a foot-long bun, with hand-cut fries.

What are some new items on this season’s menu?

We’re doing an organic, flattened chicken breast; it’s flattened with a brick from the original ballpark, from 1908. We’ve wrapped them up in foil [and weighed down the chicken with them].

What is the biggest difference between working at a fine-dining restaurant and a baseball stadium?

Well, right now I have an executive sous chef plus four other sous chefs and about 100 back-of-the-house employees, so just the scale is different. In addition to being in charge of the Pavilion Club, which is our buffet, [and] the owner and luxury suites, I also feed the media and the players’ wives. And on nongame days, we do catering. You want to be everywhere at once, but you just can’t, so you have to have as good a team in place as possible.

What do you bring to the stadium in terms of your fine-dining experience?

A lot of refinement, fun menus and more healthy food choices. In terms of sustainability, I’m really against food traveling the extra mile to get to the plate. My philosophy of planet to plate is simple. But also I have to match up the food with the ballgame. It would be easy for me to do fancy food, but when people come here they want to have ballpark fare. I have to put my own spin on it, but they have to feel comfortable, too.

What is the biggest challenge?

Capacity on a really good day is about 36,000. There are so many different menus and so much going on in so many areas, but I welcome it.

It’s not like I’m bringing a whole lot of new food in. I’m just making it as good as it can be and as à la minute as it can be, which is a challenge around here. A lot of the time you have to cook ahead, and in a perfect world you’d like to micromanage the timing and seasoning of the food.

Do the fans really care about eating “better” food?

Absolutely. There are thousands who feel that way. On the premium side they really want to experience good food, and we try to educate people. If I can I design my menus around foods like heirloom tomatoes or beets and arugula. I’ll make a salad with local goat cheese. And when [guests] ask why it tastes so good, I say it’s because [the items] were grown right here. Obviously we can’t [offer] that all over the ballpark, but I can do it in the fine-dining areas. I can’t say enough that starting with a great product makes me look really good.

How can you make those kinds of offerings available to the masses?

In the concessions area, I think we’ve already done that with the lobster roll, and we’re trying to [offer] better produce. It’s all about developing consistency. It’s a huge challenge just to get seasoning [done properly]. You can’t just put salt and pepper on the stand and have Joe and Sam season in the same way. Just teaching how to grill properly or oil the grill down and season the onions and peppers—those are small steps, but they make all the difference in the world.

How have the tastes of today’s baseball fan changed?

People want more variety, and people are more health-conscious. Certainly we have burgers and sausages for them if they want that, but it’s nice to have other things for them to eat. People are looking after themselves better; they know that healthy choices are the way to go.

When using local and organic produce, think about the season you’re in and cook as seasonally as possible.

Do you prepare food for the players?

We are just starting to do that this year. The Red Sox wanted to talk to Aramark about making some of the Japanese players and media feel more at home here so we are going to do some Japanese cuisine in the clubhouse. Feeding the players is a tricky situation. I’ve never done it before because they usually have clubhouse boys who basically run favors for them; they go to outside caterers, restaurants or stores for them. But I feel like that’s about to change. I’m cooking more health-conscious lunches and dinners for them now. David Ortiz approached one of my sous chefs about a month and a half ago and asked, “My cholesterol is high; can you cook for me every day?”

Are you a baseball fan?

Big time! I grew up in this area and always liked the Sox. My father took me to Fenway when I was a kid. Now though, usually when I’m done I go home and watch the game. When it’s a 16-hour day for me, I’ve got to get six or seven hours of sleep so I can do it again the next day.