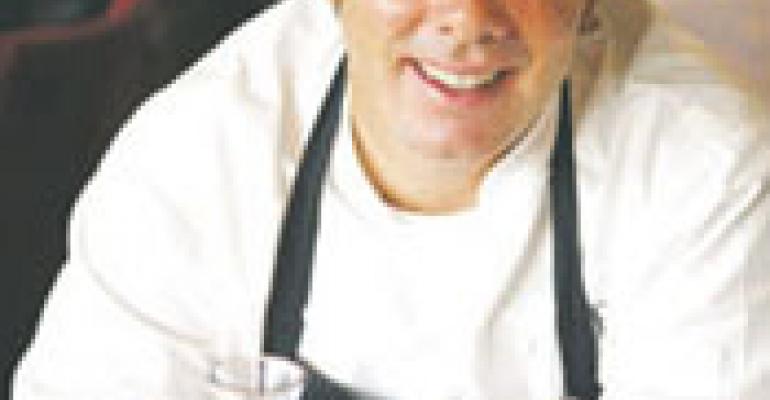 Under the Toque: Chef-philosopher Sullivan finds meditation, meaning in the kitchen

Mark Sullivan, who studied philosophy in college and initially had his sights set on graduate school, never set out to become a chef. But ultimately his family’s food-based traditions and his own world travels led him to a life in the kitchen.

As a child, Sullivan was introduced to nightly dinner as more an event than just a meal. Later, that same passion for food—and the sale of a 1966 Safari van for a plane ticket—allowed him to travel to France and Northern Spain, where he received a further glimpse of the meal as a family event.

After returning to the United States, Sullivan opened The Village Pub in Woodside, Calif., where he aimed to create an atmosphere that emphasized the social aspect of meals, as he’d experienced in Europe and as a child.

“The idea that you’re giving something to someone, that’s really satisfying to me,” he says. “That you have that kind of effect on someone’s life, whatever it may be, a rehearsal dinner, an engagement dinner, or just a nightly dinner out. I see it as a great living room, a greater familial living room.”

Sullivan recently opened his latest restaurant, Spruce, in August. This new venture allows him to hone in on his craft of charcuterie and to grow his own produce through his partnership with SMIP Ranch, a 5-acre organic farm in Woodside, Calif.

You studied philosophy and art as an undergraduate and planned to go to graduate school. What happened?

I decided to try [cooking] while looking to go into graduate school. I’ve always loved cooking, especially coming from a food family. I started apprenticing in San Francisco and just fell in love with it. I didn’t ever feel like I would be a chef, but sort of just became one. It was almost one of those things where you end up doing it for ten years and someone says, “Hey, do you want to be the chef,” and all of a sudden you look back and ten years have gone by. It was a really natural fit for me.

Did you find your travels to Europe influential?

It was a big eye-opener. I had the opportunity to cook in France and Spain. I was there for six months for three different chefs and a family I ended up cooking for. After six months, I really loved it and wanted to stay, but the whole issue of making money became real. Having that opportunity really opened my eyes to seeing the cuisine of Europe, seeing unique, interesting things you wouldn’t see in the United States.

[In Europe] cuisine is such a vital component of family, friends and life. The family that I cooked for would eat lunch for two-and-a-half hours every day. It was pretty inspiring.

How did growing up in a food-focused home influence your career-path?

Eating at home was a big deal for me. I think that was part of why I wanted to do this. We spent every single night [having] a two-hour family dinner, getting involved in the whole process, cooking and cleaning. I think that I really relished that growing up and wanted to give that to other people.

Since you were a self-taught chef, do you think someone has to have a certain natural ability?

I feel like cooking is a very innate activity. It involves, first and foremost, a desire and a love.

What is the biggest challenge in opening a new restaurant?

In order to produce and cut all food in a timely fashion, frequently check your knives to ensure razor-sharp edges.

The biggest challenge is I have a family. I can work 20 hours a day, but the challenge is that I have a new son, so trying to negotiate time here and also have some time with him and my wife. On a personal level, opening a new restaurant is a major undertaking.

What about on a professional level?

I liken it to a dance. To take 25 to 30 front-of-house employees and 25 to 30 kitchen employees, many of whom have never worked together, and have them dance. So the first few days are especially challenging. When you start dancing, the food starts flowing and each employee understands intuitively where things are going. Having already done The Village Pub, it’s now that much easier.

Did you bring any of your education in philosophy to the kitchen?

I think so. Sometimes it’s hard to see how that enters into cooking, but it does. I studied a lot of Eastern philosophy. Cooking as meditation is very vital. A lot of people come into the kitchen and it can be laborious. Unless you can get into a meditative experience with it, it can become a challenge for some young cooks. The idea of it being a meditation has been somewhat cleansing for me. Without getting too deep into it, it was a very freeing experience.

You described the menu at The Village Pub as American, but especially influenced by European technique. Is Spruce the same?

I would call Spruce contemporary American. Most cooking technique is predominantly European anyway. I would say we use a lot of Old World methods, since part of our history came from Europe. For all intents and purposes, though, I’m an American, so we use mostly local and American products.