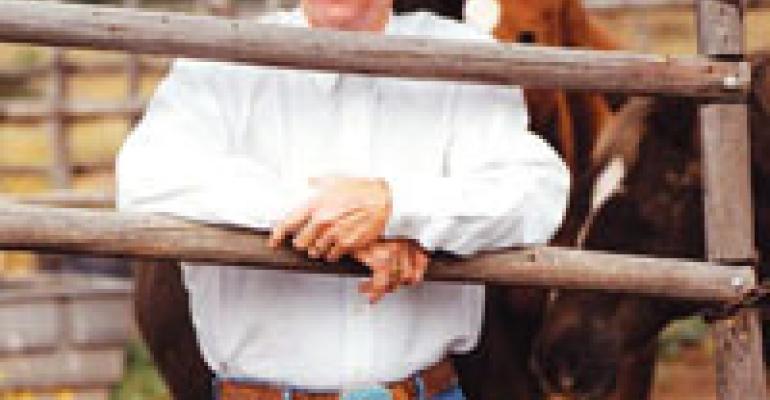 Ed Tinsley III, owner of the 19-unit K-Bob’s Steakhouse chain based in Santa Fe, N.M., is making a second attempt to win a seat in the U.S. House of Representatives, running as the Republican nominee in New Mexico’s 2nd Congressional District.

He ran unsuccessfully in 2002, losing in the primary to current Rep. Steve Pearce, a Republican who now is seeking election to the U.S. Senate.

Tinsley is a former chairman of the National Restaurant Association, and NRA officials encouraged him to run again. The NRA Political Action Committee also has backed him financially, contributing $5,000 to his primary campaign and the same amount for the general election. It also contributed $200,000 in independent expenditures for TV commercials. That’s the most money the NRA PAC has given to any candidate.

Before Tinsley was named NRA chairman in 2006, he had been the association’s vice chairman and treasurer.

Tinsley lives in Capitan, N.M., with his wife, Meredith, and two children, Edward and Ede. He runs the Flying W Diamond Ranch, which has been in his family for more than 50 years. He raises cattle and develops real estate, and he is active in the oil and gas industry in New Mexico, Texas and Louisiana.

Tinsley has campaigned for immigration reform and tighter border security. He supports insurance-purchasing pools for small businesses and advocates tax programs that would benefit restaurants, lowering business-tax rates to create jobs, simplifying the tax code and reforming the alternative minimum tax. He also favors extending the maximum deduction under section 179 of the U.S. Internal Revenue Code, which allows businesses to fully expense tangible property in the year they purchase it.

In addition, he says the tax cuts approved in 2001 should become permanent, and he favors repealing the so-called “death tax.”

Tinsley recently answered questions about where he stands on issues that affect the restaurant industry, which he calls “a very regulated industry from all levels of government.”

What prompted you to run for Congress?

Well, a lot of it has to do with my involvement in the National Restaurant Association, quite frankly. I saw up close the ugly sausage-making process on Capitol Hill and how extremely difficult it is to move legislation forward and how bad legislation is made. Therefore, a lot of times what we are stuck with is excessive taxation, regulation and litigation, none of which helps restaurants create jobs.

Instead of individual states enacting nutrition-labeling laws, should Congress enact a federal law to make requirements consistent in all states?

Well, I’m not a big fan of governmental regulations into what should be a common-sense solution between consumers and small-business folks. In this case, consumers are asking for nutritional information, and restaurants are providing it. Nutritional information is often provided in the restaurants in posters, on menus, on table tents, in brochures, tray liners. It’s on the Web. I do support a consistent standard that has some pre-emption and some safe-harbor provisions for variations in recipes and minor differences caused by different suppliers or different chefs for major restaurant chains. What bothers me is the burden this might place on independent, single-restaurant operators, and hope that federal legislation takes into consideration the considerable differences between multiunit operations and independent restaurateurs.

What is your position on energy, and how will it help lower gas prices and stimulate business growth?

We need to find more oil, use less and invest in the future in alternative sources of power. I’ve been clear and up-front on the need to drill for American oil, in ANWR [Arctic National Wildlife Refuge], offshore and Otero Mesa. High gasoline prices cause a ripple effect across all sectors of the economy. With prices hovering at $4 a gallon, people go out to eat less. That’s a simple concept to understand, but not in the current Congress.

What is your position on federal check-card legislation pertaining to union organizing?

This is a measure that would artificially increase the power of labor unions in our country, which has been on the decline for decades. The right to vote in private, without intimidation, is a fundamental principle of our democracy. Labor unions are not above basic democratic principles.

Has the nation’s financial crisis changed your position on making the 2001 tax cuts permanent, lowering the business tax rate or extending the maximum Section 179 deduction of the IRS Code?

No, it’s reinforced them. With taxpayers on the hook for some $700 billion, the best way to wreck this economy is to drive taxes up even higher. The way out of this mess is to let businesses grow and find the proper role of government in regulating the financial sector. Congress has a lot of work to do reforming Fannie Mae, Freddie Mac and finding the right role for the Treasury Department, the SEC and the Federal Reserve.

If elected, would you work for health-care reform that would enable small businesses to band together to buy health-care coverage for employees across state lines?

What are the key points to your position on immigration reform, and how would they affect businesses?

I would secure the borders first and then initiate a realistic guest worker program that does not involve amnesty.

What can Congress do to make food safer and reduce the risk of salmonella and other illnesses?

First and foremost, we must provide safe food for our customers. To do this, I’d support increasing funding to the FDA to help with the problem. I’d support giving the FDA authority to implement a recall. I think it might even be necessary to begin to regulate the fresh-produce industry.

What other issues affecting the industry would you work for?

I’m very concerned that 30 percent of our domestic corn crop is going to ethanol production. I am not a friend of trial-lawyer tactics that continue to advance frivolous legal challenges, like obesity lawsuits.

What lessons have you learned as you campaigned?

Well, to start with, voters in my district are fed up with gasoline prices, which we already talked about. But it’s worth talking about some more. The No. 1 thing we can do for our economy is reduce prices at the pump. As for our unemployment rates and home foreclosure rates, southern New Mexico is not immune to these problems. However, people here played by the rules, by and large, avoiding reckless real-estate speculation and subprime loans. So, our people here want to know that they are getting their money’s worth as our nation faces a financial crisis, and rightfully so. We restaurateurs are perfectly suited for public service. The nature of the profession is one of hospitality, serving others and providing outstanding customer service. Restaurateurs are also great listeners. We have restaurants full of neighbors who share a cup of coffee, a sandwich and a slice of pie. Every day, we hear exactly what is going on in the community, what needs to be fixed, and we hear practical solutions. I think it’s the perfect background to serve. We need a lot more restaurateurs in office.