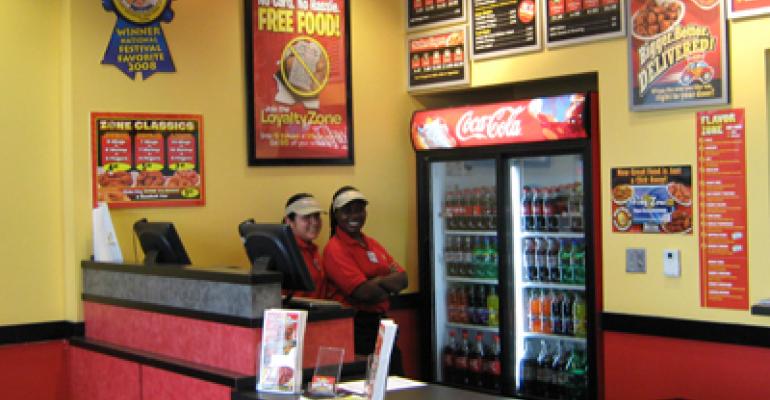 A Marine veteran finds success in the restaurant industry

Todd Waldemar returned from Iraq in 2006 and knew that he had the experience and leadership capabilities as a Marine to go into business for himself. He just didn’t know everything about one industry to get started.

But researching several franchised businesses before enlisting with Wing Zone gave him the confidence to know that the discipline instilled in him by the Marine Corps would allow him to leverage platforms already developed by the franchisor. Today he franchises four units of the fast-casual chain.

“The military really drills into you the philosophy that you can do,” said Waldemar, a graduate of the United States Naval Academy. “When you’re given a task or a mission, it’s assumed that you’ll carry it out and be successful. … I’m not thinking about my lack of restaurant experience, but I’m looking at it in terms of knowing I can do it.”

Waldemar opened his first Wing Zone in June 2006 in Jacksonville, N.C., near Camp Lejeune, a Marine Corps base. He later opened locations in Virginia’s Hampton Roads corridor cities of Virginia Beach, Newport News and Norfolk. He credited his ability to follow Wing Zone’s operations and training systems for thriving in business, as well as the commitment to service and risk-taking that made him a successful Marine.

“My willingness to take risks may be connected to my military training,” he said. “If you’re really risk-averse, the military is probably the wrong place for you to be. A lot of times soldiers are risking their lives — and while I’m not doing that here, it’s still a different kind of risk that I’ll go for when the potential returns warrant it.”

Wing Zone chief executive Matt Friedman said Waldemar not only shows the leadership qualities that make military veterans good franchisees, but he also gets heavily involved in the communities where his units operate, all of which are near military bases and towns.

“From a development standpoint, Wing Zone has been very successful in military markets, and we love the idea of veterans becoming franchisees,” Friedman said. “They understand how to follow a system, and if they follow ours, they’re successful. Not every one of them is a natural leader, so we look for people with leadership qualities in that group as well. But if you start with the foundation that military men and women understand the chain of command and are hard workers, they’re almost always a good fit.”

Atlanta-based Wing Zone has 85 restaurants in 15 states, and all but two are franchised. Of the 25 to 30 franchise stores set to open in the next 15 months, several will be in military communities. Friedman said Wing Zone came to that strategy unexpectedly, after locations opened near bases in Pensacola, Fla.; Biloxi, Miss.; and Dayton, Ohio, quickly became top-performing units.

Now, Wing Zone has partnered with the Army and Air Force Exchange Service, or AAFES, to open more restaurants on or near bases. Prior to that, the chain had done some recruiting of military veterans through the International Franchise Association’s VetFran program.

VetFran, which was relaunched after the Sept. 11, 2001, terrorist attacks, has more than 400 franchisors looking to recruit, train and provide financing for veterans, and 89 food and beverage concepts participate, said IFA communications director Matt Haller.

“There are a lot of people out there trying to capitalize on something like this for good PR, but VetFran is something where the IFA is providing financial assistance and working diligently on Capitol Hill,” Haller said. “As we wind down the wars in Afghanistan and Iraq and more soldiers enter civilian life, the program seeks to educate veterans how to go into business for themselves but not by themselves.”

The restricted access to capital remains the biggest challenge for all franchisees, but it’s particularly onerous for a veteran who may have been serving overseas during the recession, Haller added.

“If you’ve been overseas for five years, it’s a much different economic climate than in 2007, especially in terms of the lending environment,” he said. “Going into a bank today is very different. We want to do everything to provide prospective franchisees with all the information they need to go into that bank to get financing.”