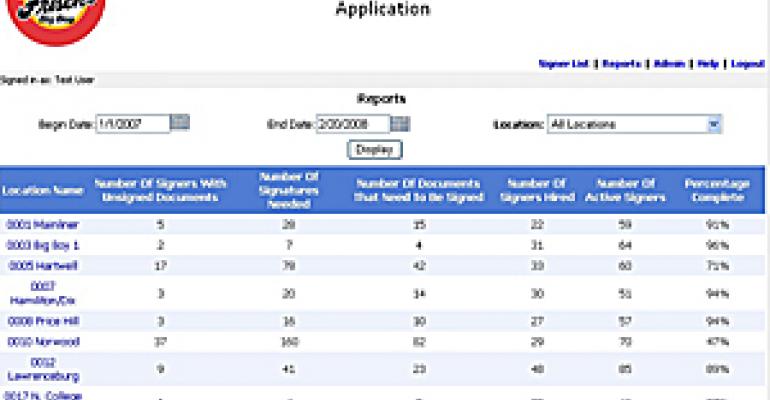 CINCINNATI It is commonly held that one should never mess with the U.S. Internal Revenue Service, or IRS. To help ensure that it doesn't run afoul of that government agency and others, Frisch's Restaurants Inc., based here, has developed a labor-saving electronic signature capture and paperwork monitoring application.

The homegrown application enables individuals at the restaurant level to electronically sign I-9 employment eligibility verification forms, as well as W-4 employee withholding allowance certificates and other important workplace documents. Among other benefits, Frisch's officials said, the program yields 100-percent compliance with paperwork requirements and has eliminated 100 hours of internal auditing time each year.

Michael Everett, vice president of information services, said the company plans to deploy in July — in a limited, unspecified number of units — an enhanced version of the system that encompasses additional documents, such as employee disciplinary action reports. A rollout of that expanded application is slated for completion in May of 2009. The upgraded system also will be implemented in the operator's licensed Golden Corral stores in line with an anticipated conversion of those units to the Frisch's technology platform sometime down the road.

Everett said the need of Frisch's' to better manage employee signing of I-9 documents was a key catalyst for developing the system. "The federal government has become really strict about completing and filing the necessary paperwork surrounding individuals' eligibility for employment in the U.S.," he explained. "We needed a way to get it done fast and make certain it had happened, without forcing area supervisors and regional directors to visit stores to get the job done as we had been doing,."

"We have 8,000 active employees at any one time, a turnover rate of 250 percent and, by law, a need to keep paperwork for three years following employees' termination of employment with us," Everett stated. "That alone was a challenge, but our goal is also to have new employees sign all their paperwork within three days of being hired, which in the past was at best a difficult task. Going though files to find the documents took time, and often supervisors didn't know until the end of the month whether or not stores were up-to-date on paperwork."

In addition, because of time constraints, the sample size for Frisch's regular internal document audits was small — 10 to 15 stores — and therefore not entirely accurate, noted Everett.

To keep development of the application manageable, a decision was made to limit to nine the number of individual signed, completed documents that it initially would cover. The I-9 and W-4 were put on the list first, based on their overall importance. The remaining five documents were chosen from the Frisch's employee handbook.

An example of a document pulled from the handbook for use with the new system is a uniform agreement that specifies exactly how many garments, such as shirts and pants, and accessories, including nametags, have been issued to each new employee. Another is a checklist of steps that must be completed whenever a staff member signs on at a Big Boy store; those acts range from picking up uniforms to reviewing various store policies.

Frisch's spent about $25,000 to develop the system internally with assistance from Haverstick Consulting of Indianapolis. The application extracts pertinent I-9 and W-4 information about each new employee from the operator's MenuLink back-office software and displays it on store managers' computer screens for employee and manager signatures.

Additional data that do not reside in the MenuLink database, such as uniform issuance and checklist information, are added to the database and presented for signature via screens configured by Haverstick. Employees and managers then use electronic signature capture devices — one per store, acquired at a cost of $100 each — to add their signatures onscreen.

At any time, internal auditors, area supervisors, regional directors and human resources personnel can query the database remotely to determine which employees have not signed the appropriate paperwork, as well as exactly which documents are missing signatures. Should a document remain unsigned beyond a user-defined interval, the appropriate parties are alerted via email.

Everett said the operator does not incur any additional expenses to maintain the system because it is administered entirely in-house, adding that its benefits "far outweigh" the technology investment.

"Knowing that we are in compliance with the government [in terms of having on hand and filing signed I-9s and W-4s] and are thus able to avoid expensive lawsuits and fines is the true value of the system," stated Craig Maier, Frisch's chief executive and, according to Everett, the driving force behind the application.

"Our area supervisors are saving one full week of time per year, because the system constantly verifies the employees files are up-to-date signaturewise," Everett added. "Across our entire network, the savings accounts for nearly half a full-time area supervisor — and that time is now devoted to monitoring and improving our operation."

The information services executive continued, "In-person internal audits have become a thing of the past, saving another 100 hours annually. And finally, the store managers have a clear understanding of their employees' file status on a real-time basis, rather than only at month's end."

Frisch's tested the application in a laboratory setting before undertaking a gradual rollout that began in one store in early 2007 and was completed by May.

Several modifications of the system were made as a result of the test. Those included programming the software to mark documents as containing missing information and to require that specific data fields within these documents — for example, employee citizenship status — be filled in before signatures could be accepted.

Aminimum signature length was set to prevent employees from substituting an "x" or illegible line and, in turn, denying that they had truly signed a document or documents. Everett said the operator also "cleaned up" the MenuLink database by removing information pertaining to employees who had not worked at Big Boy in at least three years.

According to Everett, the relatively smooth development and deployment processes associated with the new application resulted from the cooperation of various Frisch's officials. He said they included Maier; Mike Conner, project sponsor and vice president of human resources; Lori Fuehner, project manager; Charity Ruby, a member of the application development team; and Dave Nebel, database administrator.