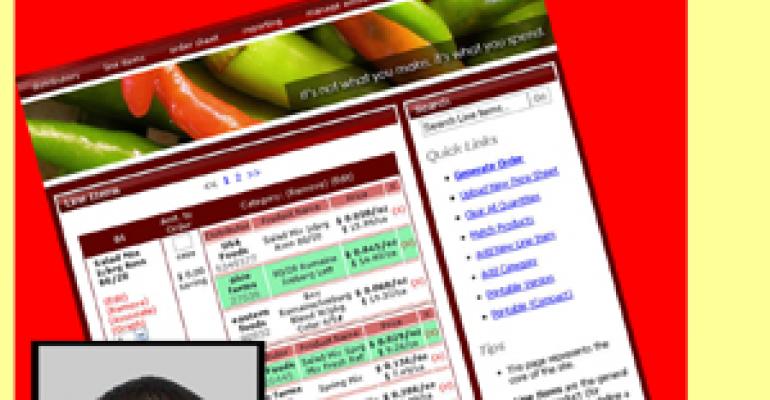 For the first seven months of 2008, the Bureau of Labor Statistics’ producer price index for intermediate foods rose an average of 2.3 percent each month, before starting a slight decline.

Restaurant operators couldn’t help but notice, with some turning to supply chain management technologies or adding additional related tools or services to help gain visibility and cut costs by as much as 10 percent.

“We buy food with integrity,” says Leonard Johnson, distribution and logistics manager for Chipotle Mexican Grill Inc., parent of the 800-unit namesake chain based in Denver. “Our food overall costs us more than any other company. Because of that, mitigating any distribution, logistics or other cost is incredibly important to our success.”

With that in mind, Chipotle deployed Basix Restaurant Services’ 24TRACC Supply Chain Data Intelligence System in the second quarter of this year.

Bandidos, a seven-unit, Mexican table-service chain in Ft. Wayne, Ind., has saved 8 percent to 10 percent on its annual food purchases in the two years it has been using software from Bottom Line Restaurant Solutions. The application helps chain management compare distributor prices and place economical food orders. Bandidos sees annual savings in the hundreds of thousands of dollars, representatives indicated.

At the start of each week, Bandidos president Jimmie Schindler II uploads updated price data from his array of distributors into a Microsoft Excel spreadsheet and then into the BLRS program. The software, remotely hosted at BLRS offices and served across the Web, populates Bandidos’ 260-item order guides with the new data and creates a side-by-side comparison of prices. Managers use the software to compose orders based on those prices, which are emailed to distributors or placed via their online ordering systems. BLRS now provides price-updating services for users.

Bandidos was a beta tester for BLRS, whose owner uses the tool in his own two restaurants. Another customer has just signed on as well. BLRS charges a $495 set-up fee and $199 a month and targets independent operators. The application requires the Microsoft Windows 98 operating system or higher and Internet connectivity.

“We may be saving just 3 cents a pound on beef, but we go through so many pounds that that can add up to be $10,000 in savings over a year,” Schindler says. Volume discounts and other incentives are reflected in the tool.

Schindler was concerned that using BLRS would alienate his long-term, prime distributor. “But it’s been quite the opposite,” says Schinder. “We’ve gotten better service” by adding additional distributors and scrutinizing prices.

An example of that better service, he says, involved a distributor representative who suggested moving from No. 1 grade tomatoes to the far cheaper No. 2 grade — a move that had no apparent downside. Of such developments, Schinder says, “We [now] have multiple reps and sources of knowledge and expertise who fight to win certain items.”

Another benefit of using comparative pricing software and services, such as those offered by BLRS, is that it can help users easily spot distributor product substitutions.

Bandidos integrated the application with its POS system and uses BLRS’ inventory functionality to debit inventory records automatically. Price updates and use of BLRS’ menu costing tools provide up-to-the-minute info on the cost of each recipe.

“Food costs over time will go up, but this keeps them so much more competitive,” says Schinder.

Food is not the only spiraling cost. Transportation and logistics often account for 10 percent to 12 percent of the total cost of goods sold, but the source and makeup of those costs can be unclear. To throw some light on those numbers, multiunit restaurants are turning to product management tools to collect data about movement of goods through the supply chain.

For a more comprehensive look at its supply chain, Chipotle turned to Basix and offerings by other divisions of Basix’s parent, Armada Supply Chain Solutions Co.

Chipotle uses the Basix application, which is remotely hosted by the vendor and accessed via the Web, to gain visibility into product movement from raw materials suppliers to the company’s 21 distribution centers and out to restaurants. Basix optimization services are used as well. The fast-casual chain also uses Basix sister companies Leveraged Execution Providers, or LXP, which offers freight management services, and Hub One Logistics, with its redistribution program.

Other foodservice operators also are trying multipronged supply-chain-management strategies, including Church’s Chicken of Atlanta, which works with technology and services provider ArrowStream.

As a result of using Basix and its sister companies, Chipotle now controls the freight costs for about 15 percent of its suppliers, with plans to add 15 percent to 20 percent more. Transportation management functionality available through LXP has enabled the chain to combine shipments to create full truckloads. To further leverage those services, Chipotle next will tackle partial-load shipments, also known as less-than-truckload, or LTL, shipments.

“We’re breaking out FOB [freight on board] freight and the distribution markup and are able to audit each piece and control inbound freight for that 15 percent,” says Chipotle’s Johnson. Chipotle also has used the tool to change economic order quantities to minimize freight spend and to benchmark costs, he adds, and also benefits by having the ability to realize fuel price reductions immediately, rather than in the next quarter.

“It gives us just-in-time information and allows us to very quickly put together histories of prices,” Johnson says. “It helps us break out components for suppliers — within landed cost we can look at the freight component, the process component, the cost of food — so we can understand how they got to the cost they did.”

Visibility was also the goal for Boston Market when it deployed Basix 24TRACC five years ago to gain the visibility it lost when moving from a single national distributor to a collection of regional operations.

“We use it on a daily basis to look at inventory and sales and to help us manage particular LTL items,” says Judy Henson, director, supply chain, for 600-unit Boston Market of Golden, Colo. She adds, “With visibility comes a little more control, and that leads to us avoiding some extra costs,” as well as accommodating the effect of promotions on inventory.

“We’re able to see and react to inventory fluctuations on a daily basis and see across several distributors in a single glance,” she says. “It’s a very efficient system.”

Boston Market currently is setting up 24TRACC to feed store systems and produce order guides and is exploring integration at the consolidator and supplier levels to get end-to-end visibility.

Setting up a product management tool is a months-long process that requires integrating with distributor systems, as well as configuration. Because uses and implementation requirements vary widely, there is no consistent price for 24TRACC, which currently has five users, but installations typically involve implementation fees in the tens of thousands of dollars and ongoing maintenance fees for the Web-based, hosted service.

According to Basix sources, users have seen a return on investment in visibility services within six months and the company’s total service offering typically results in $4,000 to $6,000 per restaurant per year in savings.

“The flexibility of a Web-based system helped us — it was an easier rollout than you might imagine,” says Boston Market’s Henson. She adds that a Web-based platform supports visibility and “sets us up for future enhancements that would only be possible via Web-based [technologies].”