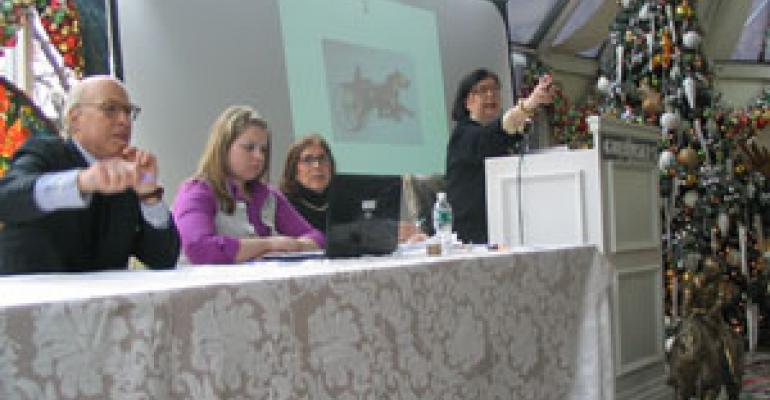 The restaurant, which officially closed Dec. 31 after more than 30 years in business, is now the site of a huge, three-day auction. The LeRoy family, who took over operation of the famous Central Park eatery after Warner LeRoy died in 2001, is looking to raise some $8 million to pay off creditors after filing for Chapter 11 bankruptcy protection last fall.

Locals and tourists alike have come to the restaurant for the sale, which is being conducted through Friday by Guernsey’s Auction House. Tavern’s treasures make up most of the items up for bid, including custom-made Tiffany lamps and Baccarat crystal chandeliers. Even Warner LeRoy’s colorful, one-of-a-kind hosting jackets and eyeglasses are for sale.

SLIDE SHOW: Click here for photos from the auction.

Adiverse crowd -- from renowned restaurateur Drew Nieporent to privileged ladies from the Upper East Side to travelers from afar –has flocked to the auction, hoping to purchase a piece of Tavern on the Green’s history.

Competition was fierce among the bidders, who seemed to be everywhere: online, on the phone and in the room.

The famous Tavern on the Green sign that hung outside Central Park West sold for $5,500. A set of fine china went up for sale next.

Nieporent said he was there to pay homage and, perhaps, bid on an item or two.

“I used to work here you know,” he said. “It’s a difficult feeling. It will be very hard to recreate what Warner did here; so much of it is the setting, but a lot of it is the design. Since this is an auction, a lot of it will be gone. So much here is unique and it’s been here for a long time.”

Dean Poll, who runs the Boathouse restaurant in Central Park, was awarded the contract for Tavern's operations. However, before he takes over, legal ownership of the restaurant's name and intellectual property must be determined. Reportedly worth $19 million, the Tavern name has become a major bone of contention between the city’s Department of Parks & Recreation, which claims ownership, and the LeRoy family, who say Warner LeRoy had the name trademarked years ago. The two parties are currently fighting the matter in court.

In the meantime, Poll is trying to negotiate a contract with Local 6, the union representing Tavern’s 400 employees and also is planning to oversee a major renovation of the restaurant, which is expected to cost $25 million to complete.