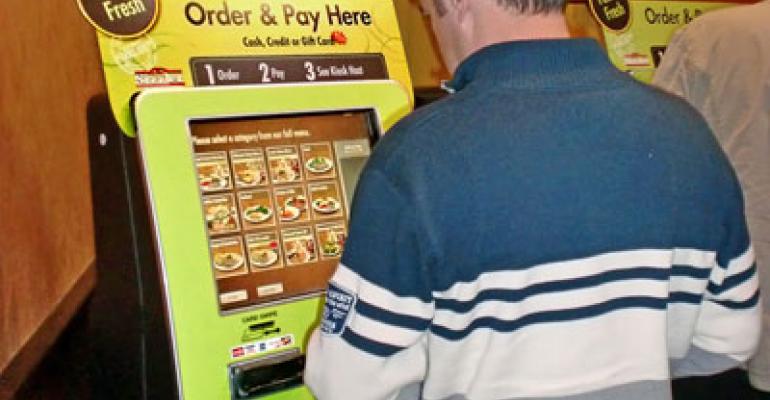 Sizzler is expanding a test of guest self-service kiosks, which the grill-and-salad bar chain said have resulted in faster service times and higher average checks.

Michael Branigan, vice president of marketing for parent company Sizzler USA, said two kiosks for ordering have been in test since mid-December at an El Segundo, Calif., restaurant operated by the chain, which traditionally funnels incoming guests to an order counter. The test kiosks are located near the area where customers line up to place their orders with cashiers during rushes, he said.

“[The use of kiosks] is absolutely quicker because the cashiers don’t have to prompt the guests with all the merchandising questions,” Branigan said. “It has cut the order time in half, and that is critical during the lunch daypart.”

He added that for guests using the kiosks, “we are seeing anywhere from a 15-percent to 20-percent average check lift” from the restaurant’s typical per-person check of $11.97.

After the initial success of the test in El Segundo, Sizzler plans to deploy a pair of kiosks in five additional Sizzler locations throughout California within the next month, Branigan said.

He said the chain set out on the trial involving EMN8 Inc. kiosks and Aloha point-of-sale system software with the goal of bumping tickets by 10 percent to 12 percent “through proper merchandising and prompts.”

Some operators have deployed self-order kiosks and other computerized input systems, such as online ordering systems, because of the potential for digital upselling, which use images or video and suggestive text prompts, such as those asking consumers if they want a premium topping on their sandwich or steak, a beverage or a dessert.

It is too early to say if the use of kiosks in Sizzler restaurants will meet the return on investment and service perception targets established for the technology, Branigan said, as kiosk development and deployment is not an inconsequential investment.

The kiosk trial was 13 months in the making, Branigan said, because the ordering steps involved in an operation with steaks and other cooked-to-order foods are more numerous or complicated than those needed at a quick-service restaurant, which is the segment that has spurred a good deal of kiosk development in recent years. Among other things, Sizzler guests need to be prompted about cooking instructions, seasoning preferences, steak-size upgrades or the addition of premium toppings, he said.

“It is amazing that it is literally men and women 18 to 70 that are using the equipment,” Branigan said. Though it might seem as if 18-to-24-year-old urban professionals would be the greatest users of the kiosks, he noted, “It really is a broad spectrum of people coming in and using them.”

Branigan stressed, however, that consideration of such things as income, education and store volumes are important when plotting markets or locations in which to use kiosks.

Such advance work seems to have paid off in El Segundo. Branigan said that unit was chosen as the initial pilot test site for those demographic considerations, the performance of the crew and the restaurant’s relative close proximity to Sizzler headquarters.

“My guests have been thrilled with the addition of the kiosks,” he said. “They feel like they are 100 percent in control of their purchase.”