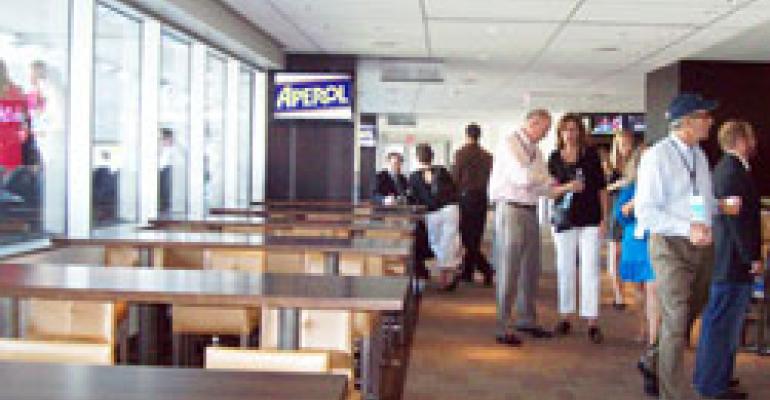 With the demand for luxury suites and premium seating at stadiums and arenas declining during the economic downturn, sports foodservice providers say they are ratcheting up their culinary offerings to add more value and customization.

“As we look out over the next five years, high value must be placed on delivering a unique experience to suite holders,” said Marc Bruno, president of Aramark Sports, Entertainment and Conventions. “There is a shift toward, or at least a focus on, customizing the suite experience to the customer who is there.”

Bruno made his comments this week during the Association of Luxury Suite Directors’ Corporate Sports & Entertainment Forum, which was at the Marriott Marquis Hotel in New York City.

He added that no matter how much wealth a premium ticket holder may or may not have, guests are always seeking more for their money.

“No matter the budget, everybody is seeking a little bit of value,” he said.

He further noted that Philadelphia-based Aramark, which currently services 2,700 suites in major league sports, has increased its business this year, citing the company’s “incremental efforts to customize the experience” as a reason for its gains amid a difficult period for luxury goods and services.

That customization, he said, could come in many forms, from offering gluten- or peanut-free foods, to the availability of menu items or appeal for fans not only of the home team, but the visiting team, too.

“[Guests] may be bringing in clients that have an affinity or relationship with the other team, so we might bring in food and merchandise that customizes the day for them,” he said.

Richard Dobransky, vice president of food and beverage for Buffalo, N.Y.-based Delaware North Cos., said he is noticing a move toward more communal dining among suite holders at stadiums.

“At the Meadowlands [home of the New York Jets and New York Giants pro-football teams], there are 20 suites attached to the [premium] club [area],” Dobransky said. “Guests can come in and eat with each other, and it’s all-inclusive in the suite price.”

Executives noted that luxury suite providers must focus not on suites that are sold for the year, but also must pay attention to single-day rentals. Dobransky said suite rentals that are sold for a lesser number of games, even just for one game, still bring in significant food and beverage sales.

“We don’t underestimate food sales even during game-day suite rentals,” he said. “We have found that people will spend a heck of a lot more on one day than they would if they had the suite all year long.”

Aramark’s Bruno said his company also did a brisk business on game-day food and beverage sales, compared with longer-term suite rentals where spending was down.

“We saw a 12 percent to 20 percent uptick in checks for food on single-day rentals,” he said.

The end result, he said, is moving tickets and selling suites, and food is integral in sealing the deal.

“Clearly, we’re all in the business of helping sell tickets and getting people to come to the ballpark,” he said. “And some times it’s the simple things that go a long way. In a lot of cases we’ll have the chef sit down and explain some meal [options] and what the experience could look like. He or she acts almost like a consultant for the team. That’s how food and beverage can financially drive a renewal that will benefit everyone.”