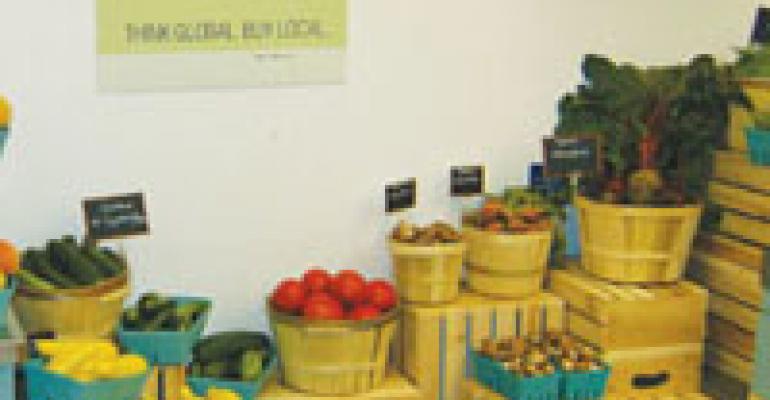 Driven by growing consumer concerns over the health of the environment, on-site foodservice operators in all segments are unveiling innovative programs offering patrons earth-friendly options.

But as local, sustainable and organic foods appear alongside other green efforts in workplaces, schools and hospitals nationwide, contract feeders say that educating customers and employees about the intricacies of such programs is one of the biggest hurdles they face.

“Sustainability and going green is really a journey,” says Helene Virgona, senior director of culinary and marketing for Sodexo Corporate Services. “I would say that a year or 18 months ago people were saying they had to go green right away. But we are taking a holistic approach on what the possibilities are. We tell our clients we can give them a sustainable program—we have agreements with farmers and produce houses across the country—so [foods] are locally grown. They may not be organic, but they certainly are sustainable in that the carbon footprint is reduced.”

Still, Virgona says that even those with environmentally correct intentions often misunderstand the entire subject of going green.

“Say I have a client who calls me from Wisconsin and says, ‘I need to go green,’” she says. “Well, I immediately say, ‘Tell me what that means.’ If they say they need to get rid of Styrofoam because their company doesn’t like it and wants to replace it with a biodegradable product, my job is to tell them that unless they have a composting program they’re really doing nothing but swapping out Styrofoam for another type of plate. Essentially, that’s greenwashing.”

Going green “is such a complex issue, a misunderstood topic,” she continues. “Anybody can really offer sustainability. The biggest piece is understanding what it means.”

In an attempt to help Sodexo employees, clients and customers better understand how to become more environmentally aware and energy-efficient, Sodexo earlier this year launched PlanIt, a companywide sustainability initiative that addresses how to make operations more eco-friendly.

The program, which debuted in January, has been rolled out in stages and features online training on the company’s intranet website for all 120,000 employees. PlanIt also features such tools as a database of local purveyors and information on how best to purchase sustainable, local and organic products, as well as marketing kits to help managers educate clients and customers about sustainability.

“We continue to train, through our website and various tools, thousands of managers,” Virgona says. “They’re taking a series of classes. One, called Sustainability 101, addresses the different definitions of what sustainable is as well as overarching concepts of corporate citizenship. From there we have presentations on food. We actually have lessons conducted in training labs that focus specifically on such things as certification for seafood and meat, coffee, fruits and vegetables.”

The coffee training, for example, offers information on fair-trade, shade-grown and organic options.

For Bon Appétit Management Co., the Palo Alto, Calif.-based on-site foodservice company that operates approximately 400 locations at some 150 accounts across the country, reducing its carbon footprint has become a chief goal. With the introduction of its Low Carbon Diet program in 2007, Bon Appétit began sourcing nearly all of its materials from North America, reduced its food waste and the amount of beef it serves, and began auditing the energy efficiency of its kitchen equipment.

The Low Carbon Diet debuted at Lewis & Clark University in Portland, Ore., April 22—Earth Day—says Robert “Mac” Lary, Bon Appétit’s general manager at the account. Because it was close to the end of the school year, it’s been difficult to gauge student response to the program so far, he says, noting that he expects the majority of student diners on campus to embrace the eco-friendly plan.

“We have placed signage up to let people know what items have a higher carbon footprint, and are suggesting they purchase smaller glasses of milk at breakfast instead of a larger size, which also is nutritionally more appropriate,” he says. “We’re also suggesting alternatives to red meat. So instead of ordering a hamburger they might get a chicken breast, because beef has a higher footprint than chicken does. We’re not trying to tell people they can’t have these things, but we’re suggesting [other items].

“There are some people who will have issues with it, but I think that Lewis & Clark has a pretty forward-thinking group in terms of environmental and social issues,” he continues, noting that the university is the headquarters for Focus The Nation, an organization that educates the public about global warming and greenhouse gases.

The university, which has six dining facilities and serves between 2,100 and 2,600 meals a day, no longer will purchase bananas from anywhere farther than Mexico, Lary says.

His staff will work with local farmers to store apples, peaches and cherries when seasonally available, he adds, noting that such fruits as pineapples and bananas have a higher carbon footprint.

“Having no bananas during the school year will be an issue for some people,” he says, “particularly the athletes who like eating bananas as a source of potassium. But we’re going to put together an education program for them [about how to find alternative sources of the nutrient].”

Lary further states that he is committed to cutting his red meat purchases by 20 percent and to reducing the amount of coffee he buys.

“Another thing we’re trying to reduce is the amount of cheese we use on hamburgers and such,” he says. “We’re trying to encourage people to not always have a piece of cheese on their sandwich.”

He adds: “We are working to reduce waste, which actually can save money. The less people waste, the less our costs are, and we don’t have to pass as much on to the consumer. We do pre- and post-consumer composting so we produce very little trash.”

Aramark Corp., the contract foodservice company based in Philadelphia, plans to implement trayless dining at 50 percent to 60 percent of its college and university accounts during the upcoming school year. After conducting two national studies, company executives found that consumers are ready to give up their trays, which should decrease the amount of waste at each campus facility.

“Trayless dining will reduce an institution’s environmental footprint by decreasing waste and conserving natural resources,” says Chris Stemen, senior director of sustainability and environmental stewardship for Aramark’s higher-education division. “Socially, it will encourage all students to participate in a green initiative that has personal and community impact, and economically, it will reduce the cost of energy, water, cleaning agents and waste removal.”

Higher education is not the only on-site segment that is offering more eco-friendly dining options to clients and customers. The health care foodservice industry also has been making green strides in recent months, introducing more naturally grown and manufactured foods, which are typically more healthful.

Diane Imrie, director of nutrition services at Fletcher Allen Healthcare in Burlington, Vt., says her facility not only offers an all-day fruit bar, it also has pledged to eliminate fryers from the kitchen, switched over to using whole-wheat products instead of white flour, and serves fair-trade coffee as well as organic coffee and tea. The hospital also has formed relationships with local farmers to secure certain foods and has built a healing garden on the grounds where produce is grown and sold to employees and visitors.

“We work directly with Green the Capitol’s office toward greening the foodservice here,” says Mary Bowman, RA’s regional director who oversees dining operations at the House of Representatives. “All disposables here—with the exception of coffee- and soup-cup lids—are compostable. We take our compostable trash to a pulper located on our loading dock, which reduces the trash to 10 percent of its original size. It is then picked up and taken to one or two composting facilities locally, which turns it into soil in 90 days.”

In addition, Bowman says, RA holds a farmers’ market on the premises where fresh local produce can be purchased. She says it is “our single-most popular program here so far.”

“People are starting to care more about environmental issues and where their food comes from,” he says. “When I speak to [people] and they find out our food is locally produced, they think that’s really cool.”

Going green to save green