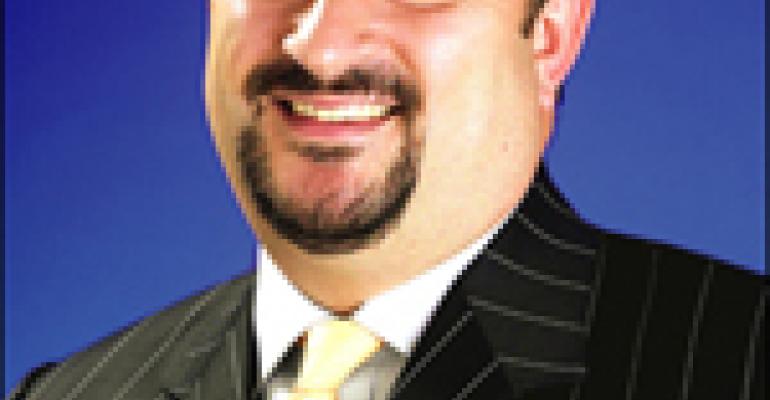 On Simon Dobson’s upcoming 40th birthday on Oct. 28, the National Football League will play at Emirates Stadium in London, marking the beginning of an exciting new era of British and American relations for both the stadium and Buffalo, N.Y.-based Delaware North Cos. Dobson became managing director of Delaware North’s United Kingdom division in 2004, two years after the on-site management firm won a 25-year contract at Wembley Stadium. In 2005, Delaware North secured a 20-year contract at the new Emirates Stadium, home to the Arsenal soccer team.

Having begun his career with his parents’ hotel group, Dobson came up through the ranks at Gardner Merchant Leisure, which was later purchased by Sodexho Alliance. As managing director, he oversaw the catering for such English establishments as Ascot Racecourse and Blenheim Palace as well as society events like The Chelsea Flower Show and the Buckingham Palace garden parties. A guardian and London board member of Hospitality Action, one of the United Kingdom’s leading industry charities, Dobson is married and has two sons and a daughter.

How did Delaware North win the Wembley and Emirates contracts when the company had very little presence in England?

Wembley National Stadium Limited was looking for a partner that could offer expertise, bring something different to the table and be able to invest. That limited the possibilities in the U.K. We offered innovation and creativity, a real concept of partnership, and a policy of hiring the best and then genuinely developing that talent to create an environment where the people grow along with the business. This excited WNSL.

How is it working for a privately held American company?

There’s a real vested interest in what we are doing. The money is there because they want it there. The executives make quick decisions. It may not always be “yes,” but a quick “no” is better than a long, drawn-out yes, so we have a pretty erudite business. When we meet, we can speak about the U.K., Australia, the U.S., and what we do in each market. We are currently rolling out a program called Guest First. It identifies a standard set of behaviors and links them to job skills. We’re collecting really interesting customer relations tools, and we’ll soon be able to track who is where and what they need and like. We will be able to match employees to positions and customers. We also have a website that allows box holders to see what is coming up in the near future. They can order and pay online, and we know who is coming and what they want. It’s called Guest Reserve. No one is doing that here. We brought it from the States. That’s the kind of innovation, drive and creativity that helped us win the contract.

What are the biggest differences between operating in the United Kingdom and the United States?

Culturally, British sport and American sport are very different. Here, in football grounds in particular, people arrive 20 minutes early, watch the first half, pile in and have a drink during the break, watch the second half, which is short, and leave. In the U.S., the experience is more drawn-out. That difference leaves us with a much shorter window of opportunity. So how do we increase dwell time? Get people to come earlier and stay later?

The other difference is that in America, there are many home games in a season—maybe 60 or 70. Over here, we may get 28 or 29. If I have a box in America, and I use it all the time, I’m more interested in quick, casual food. Here, because there are fewer events, the demand is more for full-service dining and banqueting, so the offer changes.

Why is Delaware North taking significant steps to achieve a greater presence in the United Kingdom?

We’re focusing on getting the business right and delivering our promises. We’re looking strategically at other opportunities, both in the sports market and outside, and in the U.K. and beyond. My international colleagues are in talks in a number of European countries. It’s a very exciting time.

How did you become involved in on-site foodservice?

I had a good grounding in my parents’ business, so when I moved to London, I gravitated toward the hotel business. I understood it and needed to add to my skill set. The opportunity to work at Sandown Park came then. It was like a whole new world. We had race days, nonrace days with banquet events, and days with nothing. It was completely different to the hotel business. It was fun, and I realized that I could have a life as well, which at 23 was a revelation. I also liked the company. I fit in well and progressed through the ranks. Right now I see myself as a businessperson and a leader, in general, but very much within this sector.

Can you tell me more about the stadiums?

Winning the Emirates contract has been a tremendous honor. Wembley was won in 2002. The question arose how to run it: buy another company to run it or hire someone and grow it organically? They chose the latter, and that someone is me. I joined in 2004, and we closed Emirates in 2005. My brief was to do everything to get Wembley running—create best practice, create a product that ensures that Delaware North’s U.K. brand is in keeping with its reputation everywhere else. The Emirates opportunity came in 2004. We went after it aggressively and got it. When Wembley got delayed, we were able to use our research and team to get Emirates up and running, which has been great.

Political reasons. The contractor experienced a number of delays for a number of reasons, so we’re a year late, but the team has really pulled together and everything’s on track for a spectacular May 19th opening.

Tell me about the NFL event.

What’s exciting with this is that we have American football coming here. We’ve had some in the past, but never at this level. To have all the stars playing here is extremely exciting. I have no doubt that it will be a 100-percent sellout and an excellent opportunity for us to showcase what we’re doing here.

What is next on the horizon for the company?

We need to consolidate the business at Wembley and Emirates, make sure we deliver on promises to the stakeholders, continue to develop our strategic plan, and continue to see growth in sports service, arena, and the travel business within the U.K./Europe in the not-too-distant future.