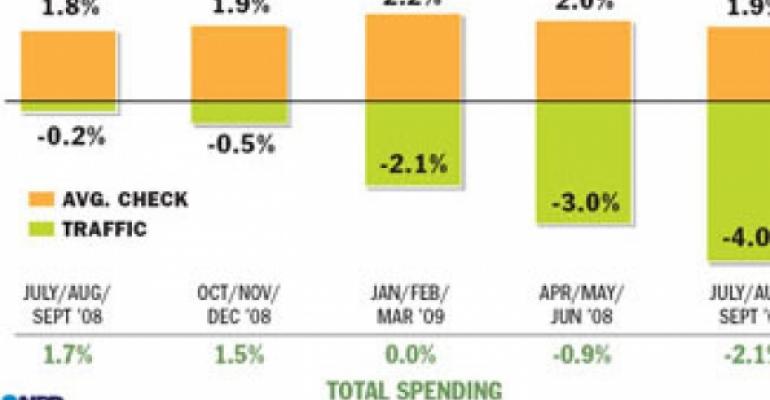 By all accounts, 2009 was a brutally challenging year for the entire foodservice industry. Despite operators pulling out all the stops, traffic continued to take a dive, sales slipped, and no segment or daypart made it through the year unscathed, according to new data from market research firm The NPD Group.

On the upside, a few select concepts did manage to entice more recession-battered consumers to visit their restaurants and part with some of their shrinking income.

“It was a tough year for the restaurant industry,” said NPD analyst Bonnie Riggs. However, she added: “There is opportunity for growth. We’ve seen some bright spots…some operators that have been able to drive traffic.”

The continued economic crisis forced consumers to rein in spending drastically for much of 2009, NPD found. The quarter ended in September was the second consecutive quarter of sales declines, with consumer dollars spent dipping slightly more than 2 percent.

“All other recessions we’ve been through, we’ve never seen sales decline,” Riggs said. “We’ve seen traffic decline, but never sales. This is unprecedented.”

The overall weakness in consumer spending was attributable to strong traffic losses, NPD officials said. Foodservice traffic fell for five consecutive quarters, with the steepest declines occurring in the latter half of 2009. In the quarter ended in September, total industry traffic declined 4 percent, on top of 3 percent the previous quarter.

With consumers cutting back visits at all times of the day, no meal occasion was able to realize any traffic gains, NPD said. Dinner, followed by lunch, remained the weakest meal occasions.

Consumers of all types made fewer restaurant visits, according to NPD. While parties with kids declined most, adult-only parties also contracted in the latter half of the year.

Despite traffic continuing to fall, the average restaurant check continued to rise, NPD found. In the quarter ended September, the average check increased 1.9 percent, on top of a 2-percent increase the previous year.

Only a few foods performed well in 2009. Burgers proved to be the most recession-proof food, with consumers ordering more all-beef patties on buns at quick-service and full-service restaurants. There were 269 million more orders of hamburgers in 2009, a 3-percent increase over a year ago. Portable and affordable, breakfast sandwiches also remained popular with consumers. There were 168 million more orders of breakfast sandwiches, up 5 percent from year ago. Other foods consumers ordered more of in 2009 included Mexican, non-fried chicken, mini hamburgers and healthy fare.

With consumers looking for any possible way to spend less while still eating out, beverages did not fare well in 2009, NPD said.

“It’s easy to leave off a beverage and keep your check down,” Riggs noted.

Only iced tea and alcoholic beverages enjoyed incremental servings growth in 2009, NPD found. Iced tea was the fastest-growing beverage, up 2 percent over a year ago. Alcohol was the second fastest, up 1 percent over the previous year. Specialty coffee was flat and all other beverages declined.

With consumers still dependent on incentives when visiting a restaurant, operators continued to work to attract customers with deals. However, the nature of those deals shifted somewhat, NPD pointed out. Quick-service outlets appeared to pull back on value menus in favor of more buy-some-get-some-free offers. Casual-dining restaurants severely ramped up dealing, especially with discounted prices and coupons—and Internet coupons in particular.

But while operators were trying their best to lure consumers with good value, they were facing some pretty strong headwinds, Riggs noted. The U.S. job market was the worst in history, with nearly 16 million Americans unemployed as of October 2009, and consumer confidence continued to trend downward. In addition, the price of food at grocery stores actually declined in third quarter of 2009, widening the gap between the cost to feed at family at a restaurant and at home.

“When there’s a gap between food at home and food away from home, consumers will shift more of their food dollars away from the one that has upward momentum,” Riggs said.

And yet, while even some of the most successful brands struggled to maintain traffic, a few concepts managed to increase customer visits, NPD said.

Among the fastest-growing chains based on guest counts was Minneapolis-based Buffalo Wild Wings. Traffic at the 630-unit sports-theme chain rose slightly in 2009 over 2008 figures.

“Our concept itself is attractive,” said Buffalo Wild Wings senior vice president of operations Judy Shoulak. “It’s probably not as easily replaced with an at-home meal. It’s an experience.”

Shoulak said another key factor in the chain’s success has been its ability to connect with the local community.

“People are working hard out there in our restaurants saying how do I connect with high schools, hotels,” Shoulak said. “[They] go out and externally market.”

Beaumont, Texas-based Jason’s Deli was also one of the fastest-growing chains. Dine-in traffic at the sandwich concept for 2009 exceeded the previous year’s traffic, officials said.

“The restaurant industry decides what it wants to serve, rather than what the customer wants. In doing so, [some operators] may be missing the mark,” said Jason’s chief executive and founder Joe Tortorice.

Tortorice attributes Jason’s Deli’s ability to drive traffic in tough times to good listening skills. In 2008, the chain put in place a number of initiatives designed to help it get a better idea of what customers want.

Lorton, Va.-based Five Guys Burgers and Fries also increased customer visits in 2009. Traffic was up between 3 percent and 5 percent year-over-year for the third quarter of 2009, according to the chain.

“We’re doing the same thing we’ve always done…focusing on our product and our crew,” said Greg deCelle, Five Guys chief development officer. “The only way we can drive traffic is with a good customer experience.”

While 2009 may be behind us, the weakness in the foodservice industry likely will continue. NPD’s industry forecast shows continued traffic weakness through the first half of 2010.

However, the rate of decline is forecasted to slow and turn slightly positive in the third quarter of next year.

“[Operators are] going to have to continue to work harder than ever to get consumers to visit restaurants,” Riggs said. “It’s been a tough environment for consumers. They have learned to live without.”