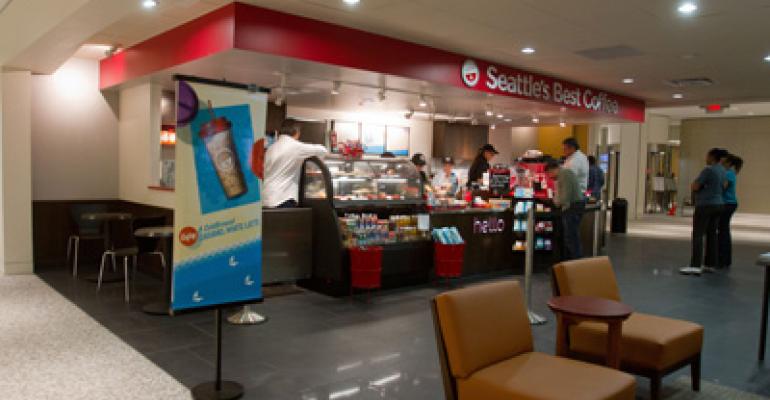 After losing almost 475 outlets located in Borders bookstores before that retail chain was liquidated earlier this year, Seattle’s Best Coffee on Wednesday said it has opened 12 new locations since April.

The secondary brand owned by Seattle-based Starbucks Corp. now has about 100 locations in the United States and Canada, and officials say they are committed to growing the retail presence for the brand, particularly in nontraditional locations where there is a need for premium coffee.

Among the 12 new units are four company-operated venues, including three outlets that have opened as part of a previously announced store-within-a-store test of Seattle’s Best cafes in Walmart Supercenters in Canada.

The chain also is in test with a corporate location in a Rona hardware store in Canada, a 950-unit big box chain there.

Eight of the new Seattle’s Best locations are franchised or licensed outlets.

Two outlets are within Mac’s convenience stores in Canada, a company with which Seattle’s Best has had a long-standing relationship, said Jenny McCabe, Seattle’s Best director of communications.

Another six are in the United States in nontraditional locations ranging from the student union of Carthage College in Kenosha, Wis., to the downtown tunnel walkways of the El Paso Energy Building in Houston.

“Our retail locations are important to our business, and franchising will be the engine for our continued retail growth,” Jim McDermet, senior vice president and general manager of Seattle’s Best Coffee, said in a statement.

“Franchisees find us to be an attractive business opportunity, combining the growth of the premium coffee segment with the strength of an established brand like Seattle’s Best Coffee.”

Starbucks officials have been touting the brand as having billion-dollar potential, positioning it as a more-accessible option for locations where premium coffee isn’t typically available.

Seattle’s Best once had more than 500 retail locations, although most were cafes within Borders bookstores. After the bookstore chain fell into bankruptcy in February, Seattle’s Best lost about 225 café outlets in the first wave of closures.

Borders ceased operation in July and the remaining 400 bookstores closed, which resulted in the shuttering of another 250 Seattle’s Best café outlets.

Among the new franchised retail locations is a unit operated by franchisee Amin Gheewalla, president of Hi Rise Amenities Inc., who now has three Seattle’s Best locations in Houston. The most recent outlet, which opened in late August, is within a series of interconnected air-conditioned walkways beneath downtown office buildings.

Other franchise locations include:

• A franchisee in June opened a Seattle’s Best featuring Caribbean pastries and snacks in a rental car center outside the Fort Lauderdale-Hollywood International Airport in Florida.

• Two licensed locations have opened in the Fort Wayne Airport in Indiana in partnership with First Class Concessions.

McCabe said the brand will continue to look for retail growth opportunities, particularly within nontraditional locations.

“You will continue to see a lot of interesting things from us on that in the future,” she said.