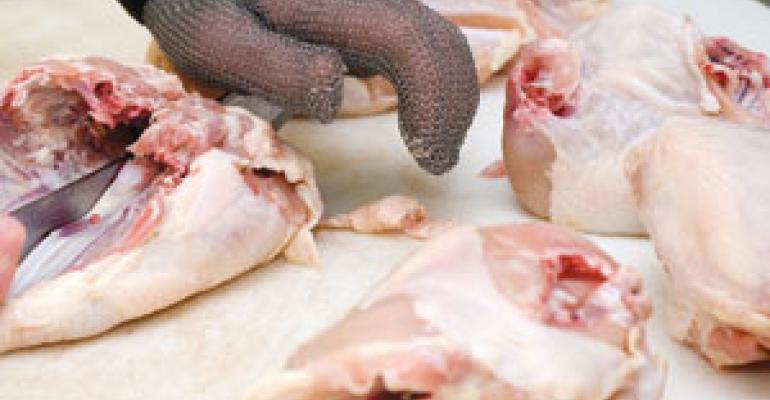 In a move reminiscent of the Cold War, Russia said it would reduce U.S. pork and poultry imports by “hundreds of thousands of tons.” The Russians followed up their rhetoric by delisting 19 U.S. poultry plants and issuing warnings to 22 others for “excessive levels of arsenic, salmonella and E. coli.”

How important is Russia to U.S. trade? In the first half of 2008, Russia represented 9.2 percent of U.S. pork exports. With exports soaking up 23 percent of total U.S. pork output, loss of Russian sales would mean an additional 2.1 percent, or 460 million to 490 million pounds annually for the domestic market. Pork prices have already plummeted on that possibility.

As for chicken, Russia represents 29.2 percent of U.S. exports of broilers, with leg quarters making up nearly all of that amount. Leg quarter exports at record-high prices have been one of the few profits sources for U.S. chicken companies. Loss of Russian exports would be particularly painful, given sky-high feed and energy costs, and would certainly accelerate the cutbacks in output already planned by producers.

Pork—Exports were hot in the first half of the year at 68.5 percent above a year ago. That extra demand helped pork prices reach record highs this summer. But the possibility of lost exports to Russia dampened the market in August. The United States Department of Agriculture currently predicts that 2008 U.S. pork exports will reach 5.4 billion pounds. The Russians could remove 100 million pounds from that projection in the fourth quarter alone. With second-half production expected to be up 4.6 percent from a year ago, pork prices have plummeted.

Larger-sized ham markets have dropped 20 cents per pound from highs in mid-August. Pork bellies tumbled from $1 to 78 cents per pound and pork trimmings are 30 cents per pound below summer highs. Only the retail-oriented, 17-to-20-pound ham market is expected to show any strength this fall, with prices recovering ahead of Thanksgiving.

Poultry—From mid-July through the end of August, the number of chicks placed for growout were 3.4 percent below a year ago, reflecting sharp cutbacks by poultry producers. However, year-to-date slaughter weights are up 1.6 percent and helping to offset lower bird numbers. First-half broiler production was up 4.7 percent, but second-half output is projected down 0.5 percent from the first half. Broiler output is forecast to decline by another half percent in 2009, but that decline should be more than offset by a 1-percent-or-better drop in domestic consumption.

USDA boneless skinless chicken breast markets bottomed at $1.13 in early September, down from an early July high in the $1.50 range. Breast prices could be significantly higher in 2009 compared with 2008. Wings at 91 cents are on their way to $1 and likely will peak above $1.20 in late January, before the Super Bowl. Leg quarters at 56 cents continue to hit record highs, driven by strong export sales.

Beef—August’s USDA report showed the number of cattle on feedlots down 4.2 percent from a year ago and less than expected. Substantially smaller March-through-June placements will lead to reduced cattle supplies this fall. In addition, a plunge in Canadian feedlot inventories foreshadows declining cattle imports. The U.S. beef cow herd is projected to be just over 32 million head by year’s end, the smallest since 1963.

While beef demand so far this year has been higher than expected, a slower economy should dampen consumer spending, partially offsetting the effects of smaller supplies on prices. But consumers are adjusting to higher food prices by trading down from higher-priced steak cuts to lower-priced chucks, rounds and ground beef. As a result, prices for lower end beef cuts will likely remain strong.

Coffee—Futures prices, in the $1.40 range in early September, are down from pre-Hurricane Gustav highs near $1.50. Hurricane damage to coffee warehouses in New Orleans was minimal. In Brazil, the winter has passed sans freeze damage. However, the coffee harvest there is running about 20 percent behind last year’s pace, and quality is lower than expected. 2008-09 ending coffee stocks will remain historically low, and the overall supply-and-demand situation is still moderately bullish.

Dairy—After rising 3.5 percent in the first half of the year, milk output in the second half will slow to 1.1 percent above a year ago. Additionally, 2009 growth is projected to be up less than a half percent. With output flattening, the demand side of the equation will be the primary price driver, and sales are slowing given the current economy.

Butter markets at $1.66 a pound are a few cents below their recent high of $1.69. Butter inventories could be tight for the upcoming fall holidays, which will entice retailers and commercial bakeries to book product on any market dips. Butter prices are projected to average $1.44 per pound in 2008, up 7 percent from $1.34 per pound in 2007. Next year prices are forecast to stay elevated, with an average in the low $1.40s.

Grain—Despite flood damage, U.S. farmers will harvest 12.3 billion bushels of corn, the second-largest crop ever, below last year’s record harvest of 13.1 billion bushels. Traders had been wary of an even larger USDA crop estimate and had bid futures down to $4.97 per bushel on August 11 from highs of $7.48 in early July. Weather conditions improved during July but were drier than normal in August. Early September futures prices were in the $5.40 range.

World corn production will be little changed from last year, with the smaller U.S. crop being offset by an increase in foreign output. Still, the USDA forecasts the world corn stocks-to-use ratio at 14.1 percent, the tightest since the early 1970s. That’s because world demand is forecast to jump by better than 3 percent in 2008-09. As a result, corn remains fundamentally bullish.

World wheat production in 2008-09 is projected up 8 percent from 2007-08. Global ending stocks are expected to rebuild, up 18 percent compared to a year earlier. Domestically, an abundance of soft red wheat is in contrast to tight supplies of hard wheat. Chicago wheat futures, which were $8.97 per bushel as recently as August 21, were in the $7.30 range in early September.

Oil—Soybean oil prices appear to be more responsive to changes in crude oil prices than they are to changes in soybean fundamentals. As crude futures have dropped from $1.45 to $1.06, a 27 percent decline, soy oil futures have saw a similar decline from 64 cents to 48 cents, or about 25 percent. In addition, a rebounding U.S. dollar is slowing exports and increasing domestic supplies. Hedge funds are now reported to be net “short” on soybean oil futures. But supply fundamentals are somewhat bullish, which should keep a floor under the market in the high-40-cent range.