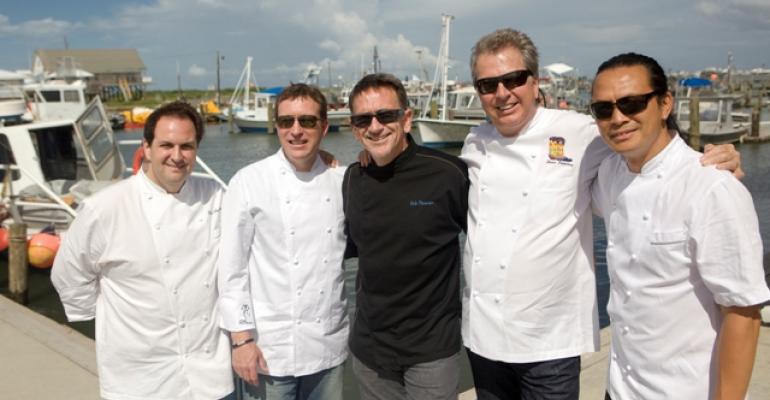 Restaurateurs stand up for Gulf seafood

Two months after the April 20 oil rig explosion that started a massive oil spill in the Gulf of Mexico, the restaurant industry continued this week to garner support for fishermen and to seek compensation from the rig’s owner, BP Plc.

On Monday, a handful of celebrity chefs and the Louisiana Seafood Promotion & Marketing Board announced a fund-raising effort, called “Friends of the Fishermen Fund,” to help those affected by the Gulf oil disaster.

Spicer, who owns Bayona in New Orleans’ French Quarter and has been a judge on television’s “Top Chef,” sought class-action status on behalf of restaurants and others in the seafood industry.

Spicer's lawyer, Serena Pollack, said in a federal court suit that restaurants depend heavily on the availability of local seafood.

“Much of plaintiff's business is based on the unique quality of Louisiana seafood, as well as the chain of delivery of that resource from the initial harvester (be it fisherman, oyster grower or shrimper),” Pollack wrote in the 18-page complaint. “Because this chain of delivery cannot be maintained, plaintiff's business has been, and continues to be, materially damaged.”

Last month, various groups of restaurateurs from Louisiana and Florida reportedly filed suit against BP because of lost profits from the oil spill, whether based on increased seafood costs or lost consumer traffic.

Fearing, of Fearing’s restaurant at the Ritz-Carlton in Dallas, pledged proceeds from the fine-dining spot’s upcoming third anniversary dinner.

Ewell Smith, executive director of the Louisiana Seafood Promotion and Marketing Board, said consumers can support fishermen by buying Louisiana seafood as well as making contributions at www.FriendsoftheFishermen.org to help those who are “so essential to Louisiana’s culture, heritage and way of life.”

Many Gulf fishing areas remain open, but more than 30,000 fishing families have been directly impacted by the oil, the board said.

The fishermen’s fund is directed by the Louisiana Seafood Promotion & Marketing Board, which is a program of the state’s Department of Wildlife and Fisheries. All donations are collected and administered by South Central Planning & Development Commission, a 501(c)1 organization.