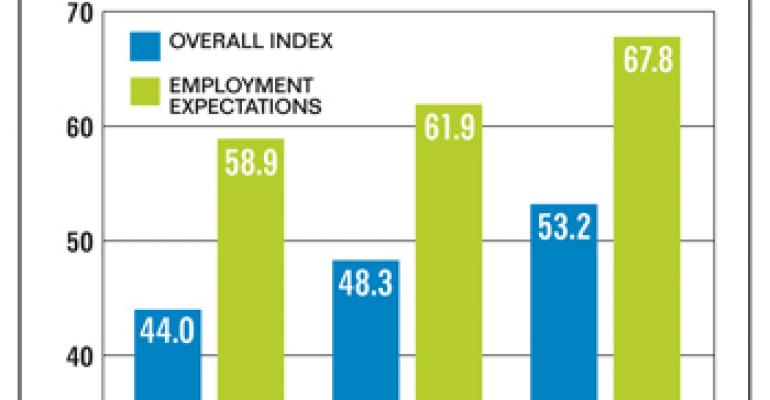 Restaurant operators expect to do more hiring in the second quarter of this year, another sign that the industry may be climbing its way out of the economic slump, according to data in the latest People Report Workforce Index.

“Things are starting to move in the direction we want to see them moving,” said Michael Harms, senior business analyst for People Report, a Dallas-based firm that tracks human resource trends for more than 100 restaurant companies.

Operators and human resources executives are encouraging more candidates to apply for jobs.

“We anticipate hiring in the second quarter for various positions at multiple levels systemwide,” said Marianne Dowdy, vice president of human resources for Whataburger Restaurants, the more than 700-unit chain based in San Antonio, Texas.

The People Report Workforce Index is a quarterly barometer of market pressures on employment, including recruiting, vacancies, headcounts and turnover. The index totaled 53.2 for the second quarter, up from 48.3 in the first quarter of the year. Index ratings lower than 50 indicate less difficulty in managing workforce issues and scores hitting more than 50 indicate greater difficulty. More than 70 foodservice concepts participated in the second quarter study.

The index’s Employment Expectations component — which represents the expected increase or decrease in the number of hourly and management employees — registered a value of 67.8, the highest it’s been in two years.

After losing jobs in 2009, the restaurant industry has started to reverse course, adding 43,000 jobs within the first three months of 2010, according to People Report. Thirty-four percent of companies reported adding hourly workers in the first quarter; 44 percent maintained their hourly staffing levels. The index reported that 25 percent added managers, while 54 percent kept their management levels the same.

Turnover is the only component of the Workforce Index that has continued to score low. Operator expectations on the metric fell to 21.1 in the second quarter survey from the first quarter’s ranking of 23.1, indicating operators expect little difficulty in retaining workers.

Cheyenne, Wyo., based Taco John’s International, for example, has been able to maintain its employment levels for the past 24 months, said Dave Schuh, executive president and chief operating officer for the chain which has more than 400 units in 25 states with most located in the Midwest.

“Our brand has benefited from lower staff turnover at all organizational levels including the individual restaurants,” he said. “Our focus has been to capitalize (on low turnover) by developing restaurant bench-strength and talent.”

Turnover is a lagging economic indicator and is expected to remain low as the national unemployment rate remains high, said Harms from People Report. Nationally, the unemployment rate was 9.7 percent in March.

“It’s supply and demand,” Harms said. “There is a larger supply of people in the labor pool and still a limited number of job openings. Until we see job growth in the economy as a whole, we’re not going to see turnover rise.”

The Workforce Index also indicated an increase in expectations for difficulty in managing employment issues for the four industry segments — quick service, fast casual, causal dining and fine dining or high-volume restaurants. The index reported a marked increase in recruiting difficulty for all segments as well as a rise in vacancies across the board. The shift could mean that as economic activity increases and restaurant same-store sales begin to rise, staffing pressure will increase, according to the index.

People Report also noted that 45 percent of companies froze salaries at the unit level in 2009, but only 10 percent did so in 2010.

“We’ve seen conflicting economic indicators throughout the past year,” Harms said. “Now it looks like all of them are starting to move in the right direction. Let’s hope this time it’s for real.”