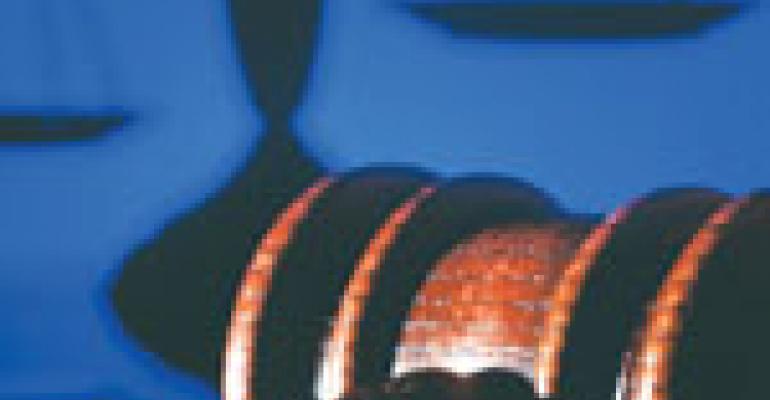 Lawsuits continued to plague the industry in 2007 as special-interest groups, governmental agencies, customers, employees and franchisees pressed claims against restaurant companies for the usual range of alleged infractions.

Those complaints run the legal gamut, rooted in everything from slip-and-fall incidents, food poisoning outbreaks and civil-rights disputes to on-the-job bias and harassment issues, back-pay claims, and contractual grievances.

Especially troubling because of the potentially enormous monetary awards that could ensue were a rash of class-action lawsuits by employees against restaurant chains over assorted work-place gripes. Among such disputes were those based on businesses’ purported failures to provide rest or meal breaks or full compensation to subminimum-wage-earning tipped workers when they performed nontipped duties.

In one such case, STARBUCKS was sued for alleged complicity in the sharing of tips with hourly workers who were designated shift supervisors—and thus allegedly were unentitled members of management.

In July a Superior Court judge in San Diego certified a class of an estimated 63,000 former and current BRINKER INTERNATIONAL employees as plaintiffs in a case against the parent of Chili’s, Romano’s Macaroni Grill, Maggiano’s Little Italy and other brands over alleged violations of California law requiring meal and rest breaks. The repetitiveness of such actions was evident in the fact that Dallas-based Brinker in 2002 had agreed to pay $10 million to settle a similar complaint by California’s Department of Labor.

Scores of similar lawsuits roiled such chains as APPLEBEE’S, which later this year was fighting a back-wages claim in a federal court in Missouri by a class of workers that could number as high as 42,000 current and former employees.

Food safety concerns also provoked high-profile lawsuits in 2007. In one case, a federal judge in Chicago this spring dismissed three of five claims made against MCDONALD’S CORP. in a lawsuit filed last year by a group of consumers who said they or their children had been sickened by gluten and dairy products purposely hidden in the chain’s French fries and hash browns. The 11 plaintiffs also had asserted that the chain provided false information in its disclosure of nutritional information.

The lawsuit was prompted when McDonald’s, while launching nutritional product labeling voluntarily, confirmed early last year that its French fries have one-third more trans fats than previously reported, 20 percent more overall fat, 10 percent more calories and contain allergenic milk and wheat ingredients, including gluten. Until shortly before that admission, McDonald’s website had described the fries as safe for consumers with food allergies and as suitable “for people with gluten sensitivities.”

Judge Elaine Bucklo ruled that the plaintiffs’ complaint did not give enough detail about McDonald’s allegedly intentional deception. But she let stand the lawsuit’s assertions of breach of warranty—in essence,that McDonald’s had sold an unsafe product—and unjust enrichment, forcing McDonald’s to fight the plaintiffs’ efforts to require changes in its advertising.

Despite such setbacks, the foodservice industry enjoyed—if temporarily—a pair of high-profile courtroom victories in 2007.

In a switch from the defensive stance restaurateurs usually are forced to take in legal showdowns, two lawsuits filed on behalf of foodservice operators or employees against governmental authorities put the industry and its workers on the apparently winning side of highly controversial battles over menu labeling and illegal immigration.

Yet the victories in those two federal cases, one in New York and one in San Francisco, could prove illusory or temporary.

Appearing to backfire against the industry was closely watched litigation brought by the New York State Restaurant Association against NEW YORK CITY over its mandate to post item-specific calorie counts on menus of chain restaurants that previously had disclosed that information through other media, like brochures and websites.

Even though the restaurant association won the battle, it stood to lose the war. That’s because the U.S. District Court judge who blocked implementation of the regulation, on the grounds that it unfairly singled out operators that already made calorie disclosures, used his ruling to define acceptable federal guidelines under which jurisdictions—potentially nationwide—could require even more restaurants to post dietary data on their menus.

The court thus virtually invited New York’s health department to reimpose what now is its pending and expanded mandate for calorie disclosures.

In the San Francisco case, a federal judge in October blocked the DEPARTMENT OF HOMELAND SECURITY’s implementation of a program that sought to levy fines as high as $10,000 per infraction against employers of some 8 million suspected illegal workers—which would include an estimated 1.4 million such employees of foodservice businesses, including a purported one out of every five cooks. The preliminary injunction was won by a labor coalition that sued to stop a “no-match” crackdown on Social Security account discrepancies, which Homeland Security has cited as evidence of massive document fraud by immigrant workers. The newly punitive variation of the long-running no-match program was to have taken effect Sept. 14 with the mailing of letters to 140,000 employers who have 10 or more workers with Social Security name or number discrepancies. The initiative would have made employers liable if they didn’t fire workers who failed to correct records errors within 90 days of a notification.

But the court held that the no-match rule would saddle thousands of businesses with “significant” expenses because of that deadline, and said it could result in the firings of lawfully employed workers because the Social Security Administration’s database is known to be riddled with errors.

But unlike the New York City case, the injunction against the no-match sanctions appeared to have staying power, pending a final adjudication of the ongoing case. Not only did the judge in San Francisco cite a burden of hardship that tipped sharply in favor of the plaintiffs and against the government, but he declared that the Bush administration had violated Congress’ 1980 Regulatory Flexibility Act by failing to gauge the cost burdens that the new no-match rule had posed for small-business owners.

The administration last month said it would issue a revised set of rules by next March after conducting the required survey of business owners. However, government officials also said they were continuing to consider appealing the injunction.

Earlier in November the court ruling had prompted the Social Security Administration to say it wouldn’t send any no-match letters to employers until early next year, after it had time to rewrite the notices as nonthreatening requests.

Yet for all the gravity and far-reaching implications of the New York menu-labeling case and the San Francisco fight against forced firings, an oddity of litigation that may have few lasting consequences was perhaps the year’s most sensational, most talked-about court case involving a restaurant company.

That flukey bit of jurisprudence took place in a courtroom in Shepherdsville, Ky., where MCDONALD’S CORP. was ordered to pay at least $7.1 million to two former employees, including more than $6 million to a worker who was strip-searched after a caller posing as a police officer instructed management to investigate a purported theft.

The victim, Louise Ogborn, now 21, sued the chain for $200 million after the 2004 incident at a restaurant in Mount Washington, Ky., claiming that McDonald’s had failed to issue warnings about similar hoaxes at other restaurants.

McDonald’s was considering an appeal after the Oct. 5 jury decision, which required the company to pay more than $1 million in compensation and $5 million in punitive damages to Ogborn and $1.1 million to Donna Summers, the ex-assistant manager who supervised the back-office search and was placed on probation for a misdemeanor conviction in connection with the incident. The jury classified $1 million of the award to Summers as punitive.

Summers’ former fiancée was sentenced to five years in prison for sexually abusing Ogborn during the search, a videotape of which was shown to the jury.

At the outset of the four-week trial, McDonald’s was ordered to pay Ogborn’s discovery costs when the company was found to have withheld evidence from her by not acknowledging four similar telephone hoaxes at its restaurants until August, contrary to a court order in May. Lawsuits were filed against the company in three of those four other incidents.

After the verdict for Ogborn, jurors were quoted as saying they were angered by evidence that her time card had been altered in an attempt to show she had been on the clock during the three-and-a-half-hour search, which would have invalidated her claim against McDonald’s.

The award for Summers, who was seeking $50 million in damages, was said to have been prompted by jurors’ view that she lost her job and was convicted of a crime while McDonald’s did nothing to help her.