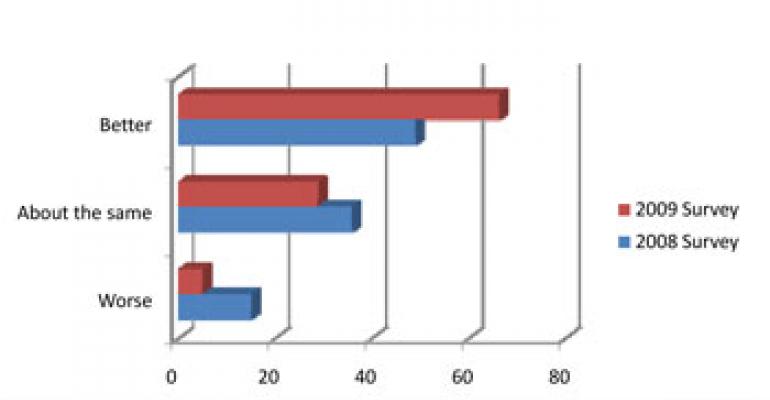 Two recent surveys forecast a slightly sunnier picture for the year ahead among both consumers and franchise business leaders, providing a glimpse of clearer skies for the restaurant industry.

Last week, a key consumer barometer, The Conference Board’s Consumer Confidence Index, showed its second straight gain in two months, with the consumer outlook for the months ahead reaching a two-year high.

The Conference Board, a New York-based research group, said the index rose in December to 52.9, from 50.6 in November. The index is based on a survey of 5,000 U.S. households, and readings above 90 indicate a stable economy and above 100 indicate economic growth. Tracking consumer confidence is key for many restaurant operators, as consumer sentiment is tied so closely to consumer spending, which drives the engine of the restaurant industry.

Last month, Darden Restaurants Inc. said it was beginning to see signs that consumers were becoming more confident about the economy and perhaps willing to spend a bit more.

“We do think that sentiment has gotten a little bit better as we look at our business across a lot of different cuts, and I would suspect that a lot of that has to do with the abatement in job losses and a little bit less concern about job security,” Clarence Otis, Darden’s chief executive, said in a conference call with investors in December.

Just like consumers, franchise business leaders are growing more optimistic about how the U.S. economy will perform in the next 12 months, according to the International Franchise Association. The Washington-based IFA surveyed its members in mid-November and more than half of the 164 respondents said they believe the economy will be better in 2010. Two-thirds of respondents said they expect their business to do better in 2010 than in 2009.

The IFA represents franchise businesses across all industries, including the restaurant industry.

The association’s outlook, which is prepared by PricewaterhouseCoopers LLC, includes expectations for slow franchise unit growth, little job growth, and a marginal increase in what it calls output, or the total gross value of goods and services produced by franchise businesses. The organization expects 2010 to be more positive than 2009, but still a slow year for growth.