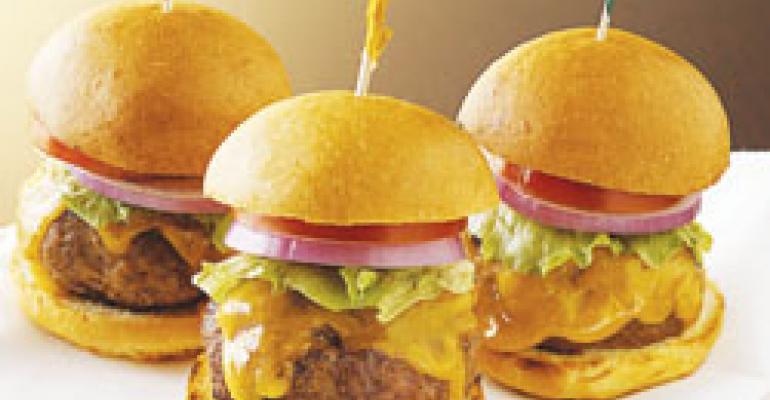 Bar patrons at many upscale steakhouse restaurants are finding themselves in a whole new environment. They’re munching affordably priced crab cake sliders and sipping strawberry-infused Screaming Mimi drinks in the bar at The Palm. Or they’re visiting Morton’s re-envisioned bar concept, 12:21, for $5 mini cheeseburgers and such libations as the Heavenly Pomegranate vodka “Mortini.”

With the economy slowed to a crawl, quality steakhouses are accelerating efforts to differentiate their bars to attract younger, more price-conscious customers. In some cases that involves an entirely different name, decor, menu and ambience than the main restaurant. One example of separate bar branding can be found at the W Hotel chain, notes Aaron Allen, founder and chief executive of the restaurant branding company Quantified Marketing Group in Orlando, Fla.

The W has several separate bar brands, most notably The Whiskey bar concept created by Midnight Oil bar owner and designer Randy Gerber for the W in New York. Each Whiskey bar functions apart from the one-of-a-kind, high-end restaurants the W chain offers in each hotel. The bars feature a party atmosphere including DJs spinning discs and a screening room. The separate branding, Allen notes, “opens up the concept for new audiences it might not have attracted” and “allows these brands to act out their alter egos – they can get away with some things their core brands might not be able to do.”

That’s certainly true of Morton’s, which began rebranding its bars four years ago as 12:21. Half of the chain’s 80 units have now been re-imaged to the 12:21 concept, after Morton’s saw double-digit growth in its bar business in the new units, says wine and spirits vice president Tylor Field.

Decor has been changed from the dark wood and black seats of the past to a lighter palette more appealing to younger patrons, especially women. To complement the new look, a lower-priced bar menu was introduced for the first time, where in the past the bar was intended just for drinking and smoking while waiting for a table, Field says.

When a high-end restaurant begins offering lower-priced food, there’s always concern that it could undermine the lucrative main dining room business. But that hasn’t turned out to be a problem for Morton’s. Field says 12:21 is attracting another audience entirely, and these younger bar customers may eventually become patrons of Morton’s dining room.

“We found there’s a whole different group of people who might only have an hour, or don’t have $100,” Field says, “but want to buy something good for $10 or $15. So we give them that opportunity in a setting that’s really fun.”

In other cases, such as The Palm, the bar offerings have been completely revamped, but the name remains the same. A new handcrafted cocktail was introduced last May, and a first-ever national rollout of a “lower-priced bar menu is planned for February,” says Palm executive vice president Bruce Bozzi. The menu will include small bites such as lobster nachos, but likely will include smaller steak meals for up to $35 as well. Given a special-price deal the 28-unit chain has struck with its lobster supplier, the bar menu will likely feature many low-cost lobster dishes in the coming year.

Consultant Allen cautions that this approach of repositioning the bar while keeping the name the same is more dangerous in terms of possibly weakening the core brand or losing dining room patrons to the bar. On the plus side, it’s less costly than marketing two different concepts between the restaurant and bar, he says.

Bozzi says The Palm didn’t want to change the bar’s name because it felt the brand’s reputation for quality still could be communicated in the new bar setting.

“With the economy so challenging, we want to encourage people who are a little more value-conscious to come in,” he says. “You get something of great quality because you’re at The Palm, and you’re not going to spend a lot of money.”