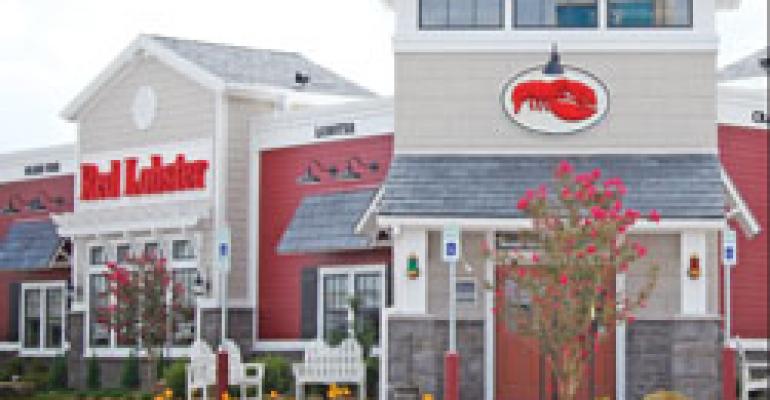 ORLANDO FLA. Red Lobster, looking to broaden its consumer appeal and increase the efficiency of its restaurants, is rolling out a new, more sophisticated decor package systemwide over the next two years and debuting a building prototype with a smaller footprint. —

Dubbed “Bar Harbor” by officials at the 680-unit casual-dining chain, who say their inspiration was the coastal town of Bar Harbor, Maine, the new prototype boasts a more natural-looking decor featuring stone, wood and warmer lighting as well as 244 seats in 7,000 square feet. That’s 21 more seats and 400 fewer square feet than the chain’s current “Coastal Home” design has. —

The first Bar Harbor unit opened in Sherman, Texas, in July. Three others have opened since Oct. 1 in Aurora, Colo.; Reno, Nev.; and Lakewood, Colo. Two more would open in January in Yuma, Ariz., and College Station, Texas. Officials indicated they would need several years to deploy the new look at all Red Lobster outlets. —

The prototype is the latest step in a multipronged strategy to refresh and update the maturing Red Lobster brand, its president, Kim Lopdrup, said. The chain is owned by Orlando-based Darden Restaurants, Inc. —

The plan is to “give customers what they want by taking the brand to a whole new level,” Lopdrup added. “Everything we are doing is to refresh this iconic, 40-year-old brand. Every brand needs to keep up with changing consumers.” —

The new look is the most recent change to be introduced by Red Lobster as it seeks—along with many of its casual-dining peers—to lure a more affluent consumer and bolster its profitability. Other casual-dining chains, such as Ruby Tuesday, O’Charley’s and Ninety Nine, also have begun extensive repositioning campaigns, including unit makeovers, in the recent past. —

At the end of November Red Lobster also introduced new plateware and a heavier-gauge and higher-quality flatware in all 680 units as well as more contemporary condiment caddies. Wendy Spirduso, communications director for the chain, said the new plates have a simpler, more upscale design that includes a blue watercolor rim. —

With the Bar Harbor prototype, Red Lobster eliminated all two-top booths in favor of four-tops and more flexible big-party seating, including booths for eight, she said. —

“So while the restaurant is 400 square feet smaller, it is more efficient and able to serve many different kinds of dining occasions more comfortably for our guests,” she said. —

Chain officials now are testing several investment levels to determine what provides the greatest shareholder return for the redesign rollout, Lopdrup said. The hurdle rate, which he would not disclose, “is based on our cost of capital and needs to exceed that by a meaningful amount,” he said. —

So far officials “are pleased with how the new restaurants are performing financially,” Spirduso said. “We know based on discussions with guests that the new design makes the Bar Harbor prototype more relevant to guests for a wider variety of events, including business lunches and couples’ nights out.” —

Bob Derrington, a restaurant analyst with Morgan Keegan in Nashville, Tenn., said the new prototype is the final piece the casual-dining chain needed to “bring together” all of the other changes made to the brand as it tries to speak to a more affluent and discriminating customer. —

“That is clearly what they are doing with the Bar Harbor,” Derrington said. —

He noted that the chain’s brand-elevation strategy appears to be working. Red Lobster reported sales of $669.5 million in the first quarter ended Aug. 26, a 6.3-percent gain, while same-store sales increased 7 percent over the same year-ago quarter. —

“If you look at industry traffic trends in the last 12 months, they have been some of the worst in the last decade,” he said. “This company has hung in there fairly well compared with its peer group.” —

Derrington expects Red Lobster to post a same-store sales gain of 3 percent to 4 percent for the fiscal second quarter ended in November. —

The analyst said Red Lobster has benefited from observing its competitors. He contends its promotions have recently been less value-oriented and more focused on trying to get away from both price point promotions and fried food. —

“I think the company has recognized that there is clearly a consumer out there who appreciates a finer dining experience and will pay a higher price for the experience,” he said. —

Spirduso noted, however, that the average per-person check remains $17 to $18 throughout the day. —

“We have been focused on keeping that check average so we are a good value to consumers,” she said. —

Once the Red Lobster brand is refreshed, Lopdrup said, officials would accelerate growth. Red Lobster has recently grown by an average of about three to five units annually. Spirduso said the goal is to increase that number of locations throughout the United States and Canada, where there are currently 29 restaurants. —

“We haven’t isolated locations,” Spirduso said. “We’d be looking for locations that have a good mix of residential and retail traffic. As you see by our latest openings—Texas, California, Colorado, Ohio, Arizona—we are looking nationwide.” —

Lopdrup said that he believes Red Lobster is in the right place as more consumers eat seafood for its healthful benefits. —

“The best changes at Red Lobster are still yet to come,” he said. —