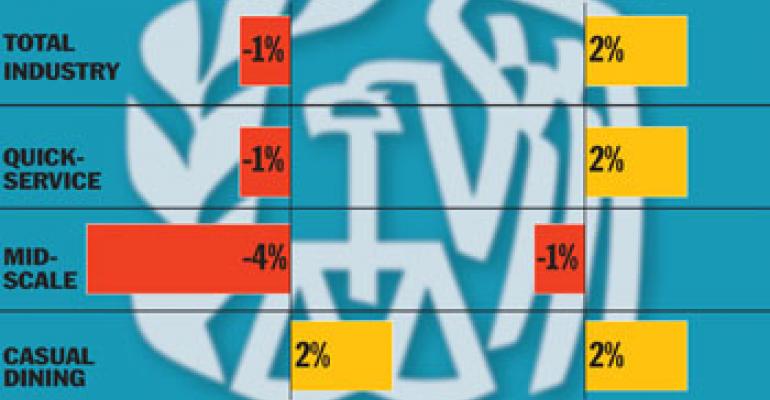 As the federal government prepares to roll out the Economic Stimulus Act of 2008, giving most American consumers hundreds of dollars each, the question on many operators’ minds is how much of that money will be spent at restaurants.

Between May and July, most single taxpayers will receive about $600. Married taxpayers could receive as much as $1,200, and parents could receive an additional $300 per eligible child under the age of 17. If history is any indication, consumers are likely to spend a significant portion of their rebates at restaurants, giving the industry a much-needed post-rebate lift, according to the NPD Group.

“If consumers respond as they did in the past, the industry should at the very least enjoy a short-term boost,” said Bonnie Riggs, an analyst for the Port Washington, N.Y.-based market research firm. “While behavior is difficult to predict, operators who aggressively court consumers at this time will be in the best position to reap the benefits.”

The last time the federal government issued a tax stimulus package was in 2001. According to economic studies, after receiving checks for $300 or $600 between July 2001 and September 2001, consumers put a portion away for a rainy day, used a bit to pay down credit card or other debt, and then, shortly after, spent the rest.

Consumers who received tax rebates in 2001 blew through the entire check within six months of receiving it, according to a study from the National Bureau of Economics Research. They spent it largely in the apparel, health, restaurant and grocery industries. According to the data, the restaurant industry captured 16 percent of consumers’ rebate dollars, while the apparel and health industries captured 23 percent and 19 percent, respectively.

The impact of the rebate on restaurants was evident in a marked increase in traffic, NPD found. In the six months prior to the 2001 rebates, total industry traffic was flat to negative. However, during the period of time that consumers began receiving and spending their checks, visits to restaurants rose 2 percent.

Nearly all industry segments benefited from the 2001 rebates. During the six-month period ended November 2001, traffic was up 2 percent in both the quick-service and casual segments. Although mid-scale traffic was still slightly off, losses were nowhere near as severe as those noted in the first half of the year.

Overall, the supper daypart got the biggest boost from consumers increased spending at restaurants, NPD found.

The 2001 post-rebate uptick in traffic was driven by increased visits from older adults, families with children and those with higher incomes, NPD found. Households with mid-range to low incomes, which likely received the smallest rebates, continued to cut back on visiting restaurants during this period.

Experts are reluctant to say just how consumers may behave this time around, especially since this downturn is shaping up to be unlike any other. While some industry analysts predict that consumers will spend their rebate as they did in 2001, others argue that other costs are going to take a bigger bite out of the return this time. Rising energy prices, skyrocketing food inflation and massive credit card debt may make consumers stingier with their money, they said.

Bigger rebate checks in the hands of more people could help, however. Many taxpayers this year will pocket twice the amount they received in 2001, and more low-income consumers are expected to receive checks in 2008. Among the 130 million households the U.S. Treasury anticipates sending checks to are millions of retirees, disabled veterans and low-wage workers who are usually exempt from filing tax returns but will need to file one this year in order to receive a stimulus payment.

“Even if consumers hold onto them for awhile, as they did in 2001, the industry should begin to see some benefit beginning in mid-June,” noted Riggs.

Knowing that consumers will have a chunk of cash to burn this summer, many operators are considering ways to encourage spending at least some of it at their establishments.

While the government wants to stimulate the economy, Pizza Hut wants consumers to eat more pizza with its new “Pizza Stimulus Package.” In early March the 6,200-unit chain announced the national promotion, which features the new Pizza Mia, an old-world-style 10-inch pie made with vine-ripened tomatoes and whole milk mozzarella cheese, for just $6.99, or $5 each when three are purchased. Unlike the one-time rebates consumers will receive from the government, Pizza Hut said the low-priced Pizza Mia would be available indefinitely.

Some chains, such as Oak Brook, Ill.-based McDonald’s, are taking an indirect approach to getting a piece of the rebate pie. According to a recent report on , on May 15, just around the time the government checks are expected to show up at consumers’ doorsteps, the burger giant will begin offering free samples of its new Southern-Style chicken sandwiches.

Canton, Mass.-based Dunkin Donuts also is hoping free samples will inspire good will—and repeat visits—from consumers feeling financially challenged. On April 15, the donut chain offered a “tax break” to customers, whether or not they file a tax return, in the form of a free doughnut with the purchase of any sized cup of coffee.

“We know Americans work hard for their money and this is our small way of showing our appreciation,” Frances Allen, Dunkin’ Donuts brand marketing officer, said in a statement.

Although experts disagree on whether promotional offerings should be directly linked to the rebate or not, many agree that it’s important for restaurants to have some value-oriented offerings during these tough economic times.

Over the past year or so, food-service consultant Dennis Lombardi, executive vice president of Columbus, Ohio-based WD Partners, has been advising clients to have several very low-priced, value-positioned limited-time offers ready to go so they can pull the trigger at any time.

“[What you] don’t want to do is get people thinking about the rebate—what you do want to do is entice them with an attractive value offer at a time and month when they have a little bit less financial pressure,” he said. “The smart operators are going to have a limited-time offer that’s going to coincide with the rebate.”