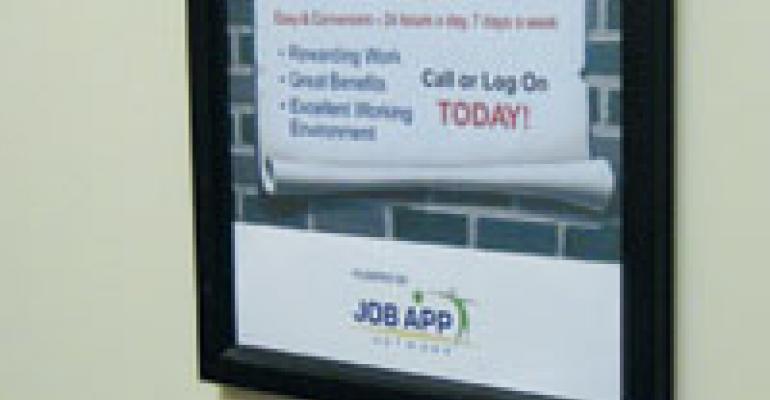 Atlanta-based Church’s Chicken saw hourly turnover fall by rates ranging from 38 percent to 53 percent at nearly 40 outlets in Texas and Tennessee that tested an automated telephone- and Internet-based screening program.

Because the stores in the pilot test did substantially better in retaining new employees who were hired through the screening process, the franchisor is rolling out the program to all 272 of its company-owned restaurants, said Melissa Smith, director of people services for Church’s.

“We all know good customer experience depends on how well-trained employees are,” Smith said. “The longer we keep them, the better trained they are and the more customers come back. That starts with getting the right person in the door to begin with.”

Turnover continues to be huge problem for quick-service restaurants, but they can improve retention with better screening, said JobApp chief executive Blake Helppie.

“The average turnover in QSR today is between 150 percent and 200 percent,” Helppie said. “A lot [of chains] have to come to accept it as a fact of life, but it doesn’t have to be that high.”

National Coney Island, a 20-unit fast-casual chain based in Roseville, Mich., saw its annual turnover of hourly workers fall below 100 percent after the company began using the automated screening method.

“At an operational level, people are happier with the candidates they are getting,” said the chain’s president, Tom Giftos. “It took a lot of chaos out of the whole process for us.”

Since the company couldn’t bring applicants into the secure airport environment, it held job fairs in hotel banquet rooms. But the room rent and loss of managers from their stores to do interviews quickly became cost-prohibitive, Giftos said.

National Coney Island hired JobApp to screen candidates online or by phone. JobApp supplies restaurants with informational ticket dispensers to set up in their stores. The dispensed ticket, written in English and Spanish, directs applicants to a toll-free number or a website address, where they take a roughly 20-minute test to determine their eligibility and qualifications for the job. Only those applications that meet the company’s hiring criteria are then referred to store managers.

The applicant screening process is much more streamlined now at Church’s, Smith said.

“You do not have someone coming into the restaurant when it is busy, filling out an application in a corner, waiting for the manager to talk to them,” she said.

Church’s employees can also hand out business cards with a phone number and Web address for people to use to submit an application.

During the pilot test, Church’s coupled the new screening process with improved training and orientation for new hires, Smith said.

“We’re always looking for ways we can get better at hourly retention,” she said. “This was one of the few tools that gave us some hope that we might be able to bend that curve.”

Currently, Church’s overall is tracking a 150-percent turnover rate for hourly crew. But managers who went through the pilot program brag to their peers about their retention, Smith said.

Giftos had been somewhat hesitant to introduce an automated hiring system to his managers, but they immediately embraced the change, he said. Now he fears they’d object if National Coney Island stopped doing it.

Applicants are asked a series of questions, including basic information most operators need to know right away, such as whether the worker has reliable transportation and is available for weekend or evening shifts, Giftos said. Now managers don’t waste time interviewing candidates who can’t meet those requirements.

Even though Michigan has some of the highest unemployment rates in the country because of a troubled regional economy, National Coney Island has still been challenged in finding good employees, Giftos said.

“For the past couple of years, our turnover has been pretty high,” he said. “There are plenty of people looking for work, but it’s hard to find candidates who match up to our needs.”