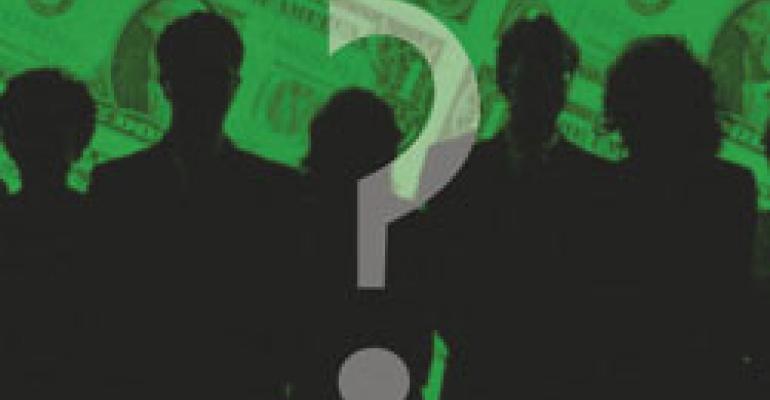 The shouted responses from the 80-plus servers, greeters, bartenders, cooks and dishwashers who were sitting in the crowded dining room at 9 o’clock that rainy Saturday morning were both frenzied and unnerving.

This was no auction. It was an embarrassment. But I’m getting ahead of myself.

Seven days earlier, around six o’clock the previous Friday evening, I was walking through this very same dining room, looking for our general manager. I wanted to thank her for the hard work she did on a recent radio station promotion.

One of our guests stopped me and complimented me on how busy the restaurant was. He suggested that we “must be running a gold mine.” I smiled wryly, thanked him for his patronage and moved on. Reality kicked in during the seven strides I took from that patron to the pantry.

As I entered the kitchen I overheard an expediter call out to a prep cook: “Darren, did you ever set the timer for those chicken breasts?” The reply froze me in my tracks. “Whoa. Dude. No. I spaced it. Sorry.” Darren leapt to the oven door, yanked it open, and the smoke told the tale. The expediter and cook shrugged—things happen—and saw it merely as having to toss 24 pieces of burnt 6-ounce chicken breasts that cost $1.57 each. But I saw it differently: That was 24 entrées we could no longer sell at $8.95 each.

Not 20 feet away, a dishwasher accidentally dropped a cocktail fork in the running garbage disposal. As the grinding commenced, he determined the best way to free it was to repeatedly turn the disposal switch on and off until the on part was no longer an option. We eventually got the mangled fork back. Along with a $725 plumbing bill.

Ten feet from the dishwasher, I watched a server absent-mindedly scrape off a dirty plate over a garbage can while engrossed in a conversation. A knife slid from her plate in to the trash. I was pretty certain she saw it and positive that she wasn’t going to retrieve it. I was right on both counts.

And hey, I don’t even want to talk about the two bartenders who had just rented the DVD “Cocktail” the night before, poorly doing their best Tom Cruise impressions behind the bar by flipping and dropping bottles of booze. Or the server who addressed a four-top by saying, “You guys didn’t want any appetizers or anything to start, did you?”

I had seen and heard all I needed to. Because of the staff’s inability to mange our resources and merchandise the menu, we had a full restaurant and were still losing money! I called my partner and discussed what I saw in detail. If it was happening in this unit, our other five operations were surely in the same pickle.

It was time to have a mandatory all-employee meeting the next Saturday to discuss the topic of cost-control, menu merchandising and P&L 101.

I opened the meeting by asking a simple question: What do you think is the average profit on the dollar here? Their replies are listed above, and I noted them on a flip chart. The lowest guess offered was 33 cents. They were serious and really hadn’t a clue. Whose fault was that? Ours as owners, not theirs; as the philosopher said: “If the son swears, strike the father.”

If this situation sounds familiar, it’s time to face facts: 1) your team thinks that you’re making a fortune, and 2) it’s your job to help them understand the role and goal of foodservice economics 101. Here’s what worked for us:

The hourly team must first understand how cost-control and menu merchandising are flip sides of the same coin. After all, your best strategy to reduce costs is to raise sales. I displayed a simple bar graph reflecting the National Restaurant Association’s research that the average profit on the dollar in the foodservice industry is under a nickel.

I marked five glasses with labels that said food & beverage, labor, marketing, rent, equipment & supplies. I took a hundred pennies, representing one dollar that a guest gave us, and put the appropriate pennies in each respective glass that reflected the appropriate expense. When I was done, I had four pennies left, which I asked each team member to put in the palm of their hand and pass on. Then I said:

“The average profit is about five cents on the dollar and we sell a burger and fries for $5. After you subtract the cost of sourcing, storing, prepping, garnishing and serving that food on that plate, on that table, with that napkin and ketchup, etcetera—you don’t ‘make’ $5, you make 25 cents—a nickel on each dollar times five dollars.

“Now, what if a server or guest drops and breaks a glass that costs us $1 to buy? Or what if a team member eats $1 worth of French fries they don’t pay for? Or if we over-portion $1 worth of dressing or napkins in our to-go containers? You now have to sell four burgers at $5 each to make enough profit to pay for the broken glass, the gobbled fries, or the extra dressing. Now think even bigger: If somebody else drops and breaks a plate that costs $10 each, you now have to sell 40 burgers to pay for one piece of china. Sell 80 $5 burgers during a shift and also break one $10 plate and five $1 glasses and eat $5 dollars of fries you don’t pay for, and guess what else you’ve broken? Yep: Even.”

It struck home for the crew members, and if you find that lesson helpful to share with your staff, use it. Here are five more cost-awareness basics to make certain that you don’t run out of month at the end of your money:

The top line is not the goal line. Gross margin is the most important number on your profit-and-loss statement. You don’t take “top-line sales” to the bank.

Make the invisible visible. Post and highlight your restaurant’s “hidden” monthly expenses for the staff to see, like garbage removal, utility bills and advertising.

Give unbelievers a job at the competition. One of the most important things you can do to reinforce a cost-conscious culture is to fire those whose actions fail to support your efforts.

Set appropriate expectations. If you were to elevate the importance of cost control to the level of importance of food safety in your restaurant, how much more effective would your efforts be?