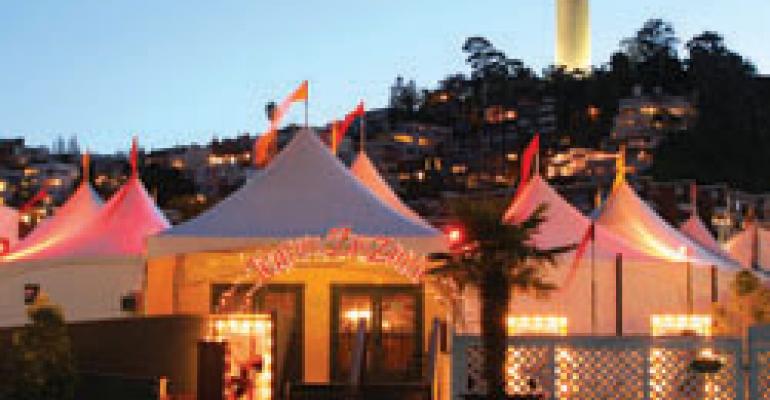 From the plate to the stage, Teatro ZinZanni aims to dazzle diners

SEATTLE Teatro ZinZanni, a concept that marries vaudeville and five-course meals under big-top tents here and in San Francisco, is taking its popular show on the road. —

A third Teatro ZinZanni will open in Las Vegas next year and officials at One Reel, the Seattle-based nonprofit arts organization that created the concept, also are eyeing Atlanta, Chicago, Los Angeles and Tokyo as potential sites for future expansion. —

Created in 1997, Teatro ZinZanni is a three-hour improvisational vaudeville show performed under an ornate Belgian Spiegeltent, or circus tent, that includes a five-course feast. The nonprofit opened a second ZinZanni in 2000 on San Francisco’s historic waterfront, where it has become a must-stop tourist destination. Annual sales from the two venues are about $18 million. —

“Of the three parallel markets we were looking at, Las Vegas has surged to the top,” said Sheila Hughes, One Reel’s chief operating officer. “We are looking at a target opening in fall 2008.” —

The nonprofit is in discussions with several hotel partners, but Hughes declined to reveal names and locations. Earlier this year, One Reel had high hopes for a location in Tokyo, but that deal did not come together, she said. —

The Las Vegas market is a natural for Teatro ZinZanni’s mix of cabaret, circus, comedy and fine cuisine, Hughes said. —

“Fine dining has emerged as a huge component of the Las Vegas scene,” Hughes said. “The hotel properties are looking for interesting additions to their property mix that bridges the gap between restaurants and a show. There seems to be a big untapped niche that ZinZanni fills.” —

In the Teatro ZinZanni concept, created by One Reel’s founder Norm Langill, Cirque du Soleil meets Le Cirque. In Seattle, some 280 guests dine each night on a five-course meal designed by celebrated Northwest chef Tom Douglas, who also serves on One Reel’s board of directors. Douglas is known for creating such highly regarded Seattle restaurants as Dahlia Lounge, Palace Kitchen and Etta’s. His newest restaurant is Serious Pie. —

In San Francisco, a similar number of diners feast from a menu created by Stanley Morris and prepared by Taste Catering. Before joining ZinZanni, Morris was responsible for relaunching Stars Restaurant in San Francisco and then taking the concept to Seattle and Singapore. —

ZinZanni’s guests choose from one of three fixed-price meals in Seattle or one of four in San Francisco and are entertained by actors whose stage is constantly moving. One moment a trapeze artist could be swinging high above a table; the next, jugglers can be tossing tableside. The cast also includes contortionists, illusionists, magicians, musicians and cabaret artists. Often, diners are dragged into the fun. Singers Joan Baez, Maria Muldaur and Heart’s Ann Wilson have joined the cast for short stints. This fall, Thelma Houston will return to Seattle for “Hearts of Fire.” —

ZinZanni menus are seasonally driven with special attention paid to food delivery, Douglas said. For instance, “we can’t do a brothy soup because the waiters are running all over,” he said. —

“Every appetizer is preset on the table, so it has to be something that sits well for a half an hour,” he said, “and they run through the dining room with dessert, so we make something with a thick caramel or chocolate sauce so the dessert sticks to the plate. They call it chaos, and it is.” —

Prep time is important too, Douglas said. The boeuf bourguignonne on one of the first menus in Seattle didn’t last. —

“When you only have one big pan, and all the flour is burnt to the pan, and now you have to brown seven more batches, it’s just not a good idea,” he said. “They don’t have a ton of equipment nor [a dedicated dishwasher], so it was a huge time problem just to get the pan cleaned.” —

“We don’t shoot for a menu that’s over the top because the show is what’s over the top,” Morris said. “We aim for food that’s enormously satisfying, good and delicious, but not the star.” —

Guests are always amazed, he said. —

“People have the expectation that they are going to eat rubber chicken,” he said. “Every night people tell me they didn’t expect the food to be this good, and that we exceeded their expectations. I hear that pretty regularly, and for me, it’s highly rewarding.” —

ZinZanni tickets range from $116 to $140 per person in San Francisco and $104 to $120 in Seattle, depending on the night, and include the show and dinner. Beverages are extra. —

“We’re now averaging $30 a person on beverage spending, and from a business standpoint, that’s a little unique to most restaurants,” Hughes said. “We’ve found for many people, ZinZanni is a celebratory event and night, and people are in the mood for champagne and cocktails.” —

Teatro ZinZanni was originally slated to run for one holiday season in Seattle but instead played to sold-out houses for 14 months. ZinZanni has had several locations in downtown Seattle, and was on hiatus for a spell between 2000 and 2002. The Seattle operation is currently closed and moving once again because its location is under development. Teatro ZinZanni will reopen near the Seattle Center, just north of downtown, in November. —

Creating new ZinZannis takes a huge effort, officials said. The site must house a 20,000-square-foot, 25-foot tall Spielgeltent and have additional room for a lobby, kitchen and box office, which all stand alone. —

The Las Vegas show will be slightly different, officials said. Rather than a five-course meal, there will be four courses, as the number of shows will be expanded to two each night, Hughes said. The running time for each show will shrink from three to two hours. —

One Reel now is looking for a local food partner that has a stellar operational reputation and can grasp the unique nature and requirements of the show. For instance, the timing of each course is cued into the show’s action, and servers are part of the action every single moment. —

Operating costs for a single ZinZanni show run between $7 million and $8 million, and the two dinner shows account for 72 percent of One Reel’s $24.7 million in annual revenues. Any profits are plowed back into the show, Hughes said. —

In addition to Teatro ZinZanni, One Reel produces Bumbershoot, an annual music festival in Seattle, as well as one of Seattle’s two large July Fourth fireworks shows, and other one-time festivals and events. —

“We’d like to have five ZinZannis in operation, and that’s a doable goal for us,” Hughes said. “It’s an exciting goal for this company. I think what’s interesting to the hotel properties is the staying power of this project. In 2008, we will hit 1 million customers. For an arts organization, that’s just simply phenomenal.” —

Added Giboney, “When you talk about ZinZanni, everyone smiles and says it’s just a ton of fun.” —