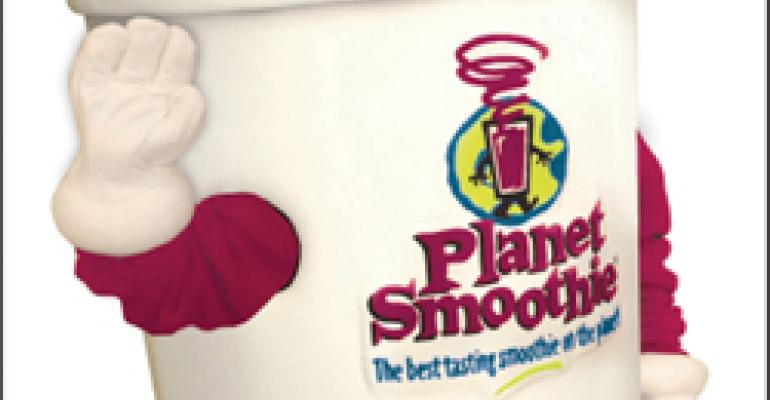 ATLANTA Planet Smoothie is preparing to put the nation’s ecology in the spotlight with the launch of a promotion encouraging eco-friendly behavior and healthful practices. —

Although a number of chains ranging from Starbucks to Snappy Salads have introduced eco-friendly buildings, menus, packaging and utensils, Planet Smoothie’s promotion likely could be the effort most visible to consumers because it involves a coast-to-coast road trip to focus on environmentally sound practices throughout the nation. —

Named “Good for You, Good for the Planet,” the promotion will send one person on a trip from Orlando, Fla., to San Diego to assume the role of Cup Man, the chain’s longstanding brand icon, and his “alter ego” to write a daily blog about the eco-friendly lifestyles, food, products and practices that he or she finds along the way. —

The 30-day trip is scheduled to begin in March, after Planet Smoothie picks the person to portray Cup Man from among the online videos consumers have submitted to describe why they should be chosen. —

The winner also will be eligible to receive a Planet Smoothie franchise. —

Chain executives view the promotion as a natural extension of the chain’s “good for you” product positioning, which emphasizes healthful meal and snack alternatives. It’s also a tactic to raise brand awareness in new and established markets and generate interest in the chain among potential franchisees, according to marketing director Nicole Huston. —

“We definitely want to engage with consumers, and we wanted to bring Cup Man to life. It’s the face of our brand,” she said. —

“Good for the Planet” is the first promotion of its kind for the 128-unit Planet Smoothie, a division of Atlanta-based Raving Brands. The chain relies chiefly on local-store marketing to reach its core consumer base and will continue to do so, Huston said, but with this national promotion it also has found a “high-energy campaign for franchisees to throw themselves into.” —

Planet Smoothie vice president Chris McCracken called the promotion a way to “have some fun and shed light on the positive practices taking place on the planet.” —

The person chosen as Cup Man will be accompanied on the trip by the chain’s marketing manager, Sarah Brown, and make about 20 “green stops” that are expected to include biodiesel plants, recycling plants and organic farms. —

The Cup Man entourage will make the trip in an eco-friendly vehicle, but the exact vehicle has yet to be chosen, she said. —

In addition to being recorded in a daily blog, Cup Man’s activities will be videotaped and played on a special website. —

The promotion is an attempt by Planet Smoothie to associate itself with a good cause and enlarge its customer base by appealing to like-minded consumers, but not every brand can pull that off, according to branding expert Laura Ries, of Roswell, Ga.-based Ries & Ries. —

The key is having credibility among consumers, she said. Ben & Jerry’s and Body Shop, for example, have “environmental credibility” because both companies are well known for their environmental activities. —

Planet Smoothie’s advantage is that it’s the type of chain that appeals to younger consumers who are concerned about the environment, Ries said. —

“It’s probably fortunate for the environment that we are thinking more green than in the past,” she said. “A program like this would do well in encouraging more thoughts in that direction and make the brand more strongly associated with the environment.” —

With the launch of the “Good for the Planet” promotion Planet Smoothie is boosting its marketing efforts by bringing Cup Man “more into the spotlight,” Huston said. —

The icon is being incorporated into point-of-purchase material, and the chain is about to break its first TV campaign, in which Cup Man will promote the smoothie supplements known as “blasts.” —

Spots created by Innovative Advertising of Covington, La., will air in the Orlando market, which has a sufficient number of units to justify a TV campaign, Huston said. She declined to release ad spending figures. —