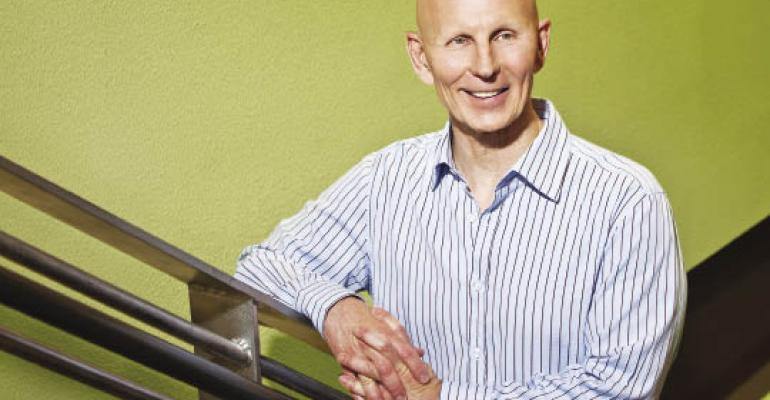 CEO Michael Mack speaks about listening to the Kitchen Cabinet

Andrew Jackson, the seventh president of the United States, is reputed to have convened the first so-called “Kitchen Cabinet,” or panel of unofficial key advisers, but Garden Fresh Restaurant Corp. is making history of its own using a similar group to help define operations strategies.

Acting on an idea by executive director of brand and menu strategy Joan Scharff, in 2007 the company put out the word to members of its Club Veg loyalty program — which now has more than a million participants — soliciting insights from regular guests. Michael P. Mack, co-founder and chief executive of the 17-year-old parent company of the Souplantation and Sweet Tomatoes brands, said more than 15,000 people applied to participate in that first cabinet. About a dozen people from multiple states were chosen.

Garden Fresh’s Kitchen Cabinet visits the company’s headquarters and typically is convened three or four times a year for two or three days, Mack said. While President Jackson’s Kitchen Cabinet likely spoke of banks and tariff matters, the Garden Fresh gang weighs in on everything from restaurant layout to service initiatives such as “cookie runs,” or the practice of approaching each table after 4 p.m. to offer guests warm-from-the-oven bakery treats.

Tell us about the first Kitchen Cabinet.

We used them in a more strategic manner. Rather than say, “Here is a new product we’re going to do,” we’d say, “Here is an area of product development we’re working on, here are some examples of it, and given what you know about our brand and the way you enjoy it, does this make sense?”

How did that approach work out?

It was immensely valuable for us because we had the opportunity to ask a lot of in-depth questions of and have discussions going on with people who use our brand a lot. We’re now in our third group of Kitchen Cabinet members and continue to use them in the same fashion. They are also ambassadors for us.

What is the thinking behind the cabinet’s makeup?

Certainly we want some geographic diversity and some age diversity. We also want to make sure, for example, that we get a mom with a younger family and that we have some grandmothers on there.

Why focus on moms?

Women have always been the majority of our [customer] mix, though that has become more balanced in recent years. I think it is fairly common knowledge that the vast majority of decisions about where to dine are made by women. And because we have a lot of family groups coming in, we thought having the moms’ perspectives would be important.

Where do guys fit in?

We tend to find that women are a little more thoughtful about nutrition. You have to be careful about some of these generalizations, but generally guys can eat the same thing every day, and women tend to demand a little more diversity and a higher taste profile in their lives. We thought that if we were trying to meet that standard [of pleasing women], it will also work well for the guys.

Is the Kitchen Cabinet cost effective?

We’ve got some travel and lodging expenses, and, obviously, there are a couple of dinners in there. But in the bigger scheme of things, it is well worth the investment.

How do you capture exchanges when the cabinet convenes?

We do have someone taking detailed notes, so nothing is getting lost, but we’re really after bigger directional input rather than a lot of details.

In what areas have cabinet members had a strong impact?

Prototype development is one. Obviously everyone is interested in reducing capital costs, but how do you do that without damaging the brand? So we did a lot of sharing with them: “Here’s what we’re thinking of doing from a design, surface, texture and color point of view.” We had them see what was going on in some prototypes we had built, as well as where we were heading. I’d say that either their approval of some shifts and changes we wanted to make, or their input on doing something a little differently, was very instrumental and helpful for us.

I’d also point to the product area. We are viewed as having good, wholesome food, so as we offer something that might be considered a little more indulgent, that can be a tricky area. We’ve been looking at a lot of warm desserts and cobblers and talking with them about it. They were very helpful to us [in determining] what would work, what wouldn’t work and how to think about positioning [desserts].

What are the biggest challenges in bringing new cabinet members up to speed?

Spending enough time with them so that they understand certain things [about the company]. For example, as much as we try to advertise and merchandise in the restaurants, the care we take in both selecting our products and how we handle them and make our food, we find that these Kitchen Cabinets are absolutely astounded by it. That’s just an important grounding they need to have, so that is something we pay a lot of attention to. And then actually convincing them that we really want to hear the truth, not some varnished or polished version of that.

If a company was thinking about starting a cabinet like this, what are the top two things they should keep in mind?

That this was never done with the idea of, “How can we look good because we’re doing this;” that this is really being done to get better input at a more strategic level.

And to remember to treat these people like world-class consultants, [and that] the chief executive officer needs to be involved. That makes sure the information gets to the top of the company, and it puts these advisers in a position to feel like their opinions matter, and that makes it much more likely they will step up and contribute at a higher level.