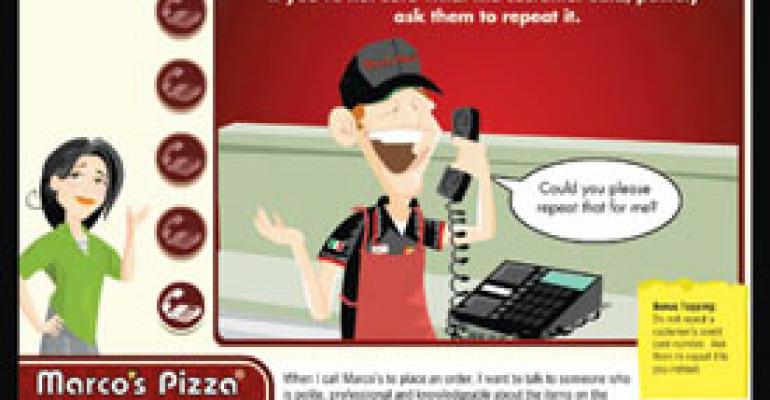 Online and computer-based training systems for several years have earned high marks among some employers for providing the means to lock down content, deliver educational materials in a consistent manner, track usage and catalog test scores.

Many users contend that the higher initial cost of creating such systems and adapting printed materials to a multimedia environment ultimately are recouped in spades by reducing paper, printing and distribution costs and enabling simplified content updates.

McAlister’s Deli, based in Ridgeland, Miss., since 2006 has developed or converted from printed matter the chain’s digital training materials, or “e-learning” content, which amount to 25 percent to 30 percent of its total educational portfolio, said Michael Laird, senior manager of training. The 270-plus-unit chain’s franchisor, McAlister’s Corp., has pilot-tested at its 32 company units the use of such e-learning materials on handheld Apple iPod multimedia players for about a year, and has been joined in that practice by the owners of about 50 franchised locations.

“The consistency in delivery and content has been a huge benefit,” Laird said. “The other benefit has been a decrease in training time.”

Scott Stanford, McAlister’s vice president of human resources and administration, said “higher test scores” are other benefits of iPod use, which applies to managers as well as hourly staff.

Included in the training materials now stored on the iPods is curriculum tied to the chain’s entire menu. Additional e-learning content, such as preventative-maintenance materials for managers, is being added as it is developed or converted from printed information or DVD-based sources, Laird indicated.

McAlister’s Corp. sells to franchisees for $350 a package including an iPod model with 80 gigabytes of data storage loaded with training materials, a protective case, lanyard, earphones and a splitter permitting playback on a television or other display device.

The franchisor recommends one iPod per store, said Laird, who noted that only one of the devices had been stolen, to date, as managers or training managers typically require something of value from the trainee, such as car keys, at checkout. Unlike some other employers, McAlister’s management does not recommend the use of the iPods on the service line or at kitchen stations—at least not during peak periods. Instead it suggests that new hires or employees needing remedial training check out the devices at the outset of a shift for individual review, practice at a station not in use or work with a designated trainer.

McAlister’s does not have a software learning management system, or so-called LMS, to manage all aspects of its e-learning and instructor-led educational initiatives or to track employee usage of training resources and record test scores. Laird said the chain hopes to work with a local university to develop such a system in the future.

Casual-dining operator and franchisor T.G.I. Friday’s, based in Carrollton, Texas, and owned by Carlson Restaurants Worldwide, does have an LMS. The chain, with about 600 U.S. restaurants, has used online training for store managers since late 2005 and more recently added such training for restaurant general managers and kitchen managers.

“We converted this traditional paper-based big manual and on the-job-training program to a blended program incorporating online assessments and online courses, [and] we ultimately reduced it by five weeks,” said Trecia Wood of Carlson Restaurants Worldwide. Now running for a total of eight weeks of e-learning, Friday’s old manager-training program had been a 13-week course.

Wood, who is Carlson’s manager of learning systems, recapped her company’s efforts during the 2008 FS/TEC conference, co-produced by Nation’s Restaurant News and Robert Grimes of Accuvia, earlier this year in Grapevine, Texas. She said T.G.I. Friday’s had introduced online training supported by a learning management system from SumTotal Systems because the chain was “concerned with our inability to automate the tracking of our food safety and alcohol service [training] compliance.” Also behind the change, the learning systems manager said, was the fact “we really had no way to know how the training [developed at headquarters] was being delivered” at 90 training stores nationwide.

The initial blended training program targeted store managers because of the high turnover in that position, Wood said. She added that the “significant reduction” in training costs realized using the blend of instructor-led and online training resulted in a pay-back that made possible the purchase of the SumTotal LMS system used by the chain to “manage and analyze and report on any type of learning, not just online portions.”

Wood said Friday’s was able to shave five weeks off the manager training program in large part by “capturing in targeted online courses” many of the activities previously learned by trainees while they followed veterans around a restaurant. Most of the in-restaurant activities converted to online courses involved financial systems or processes, Wood said.

“For example,” she said, “instead of waiting for someone to come in to redeem a gift card to learn that process … they [trainees] would learn that through an online course.”

“We developed [online] assessments associated with every activity,” Wood said. “Prior to that there was one final comprehensive test at the end, but it was oral.”

The LMS, she said, allowed them to “launch, track and report on completion of every activity.”

Now, Wood said, Friday’s not only uses the learning management system for blended training, but also for “continuous learning” and specialized applications, such as “menu implementation tests for managers across the system.”

Marco’s University, an online and interactive training program for 171-unit Marco’s Pizza, was scheduled to go live Aug. 1 at 27 stores operated by Toledo, Ohio-based franchisor Marco’s Franchising LLC, and then be rolled out systemwide by year’s end. The “university,” which was pilot-tested at 15 restaurants, features animation and live-action video demonstrations and follow-up quizzes, results of which are stored in a Web-accessible database for review by managers.

Developed with the help of Root Learning Inc., the initial curriculum of 12 modules touches on everything from answering the phone to making pizzas to food safety. Mike Jaynes, Marco’s Franchising vice president of sales and new products, said the system initially will be of greatest value to newly opened restaurants with 20 to 40 trainees. He added that the franchisor expects all employees in Marco’s units to complete online training, regardless of tenure.

Jaynes said chain management expects the appeal of the system to grow among the operators and employees of established stores as additional modules, including preventative maintenance tips, are added. Franchisees, he said, will be assessed a fee “as cheap as a dollar a day” to help fund the development of additional training modules.

“It is meant purely as an enhancement” to training, not as a replacement for the chain’s traditional instructional practices, Jaynes said. “We don’t want to lose hands-on, one-on-one training. That’s one of the things that has made us strong.”

Marco’s Franchising also does not want its training regimen shared with competitors, so employees will have access to the system only from point-of-sale, or POS, terminals within the restaurants. To avoid possibly short-changing employees at new stores, where essentially everyone requires basic training, designated workers may log on from outside computers two weeks before and after an opening, Jaynes said.

About 150 of the 384 restaurants in the Culver’s Frozen Custard system based in Prairie du Sac, Wis., are using the six “Culverized” e-learning training courses available online, said Mark Lindquist, the chain’s director of training. Online courses have been in use for about a year at five restaurants operated by the founders of the chain’s parent, Culver Franchising System Inc., and have been available since February for a quarterly fee to operators of the system’s more than 370 franchised units, he said.

Culver’s online training and conventional instructor-led education are administered using a learning management system from DiscoverLink Inc., which also assisted Lindquist’s team in the development of online curriculum. Lindquist said the savings realized using online courses to meet the chain’s food-safety training requirements, compared to the cost of books and other related expenses, alone is enough to cover the quarterly fees associated with system and related hardware.

Improvements in video processing and online management and playing technologies and faster Internet access speeds are fueling greater demand for streaming-video-based instructional materials among foodservice companies, including contract feeder Compass Group of Charlotte, N.C., said John Barkley, the Culinary Institute of America’s director of strategic initiatives. As a sign that Web-based video resources are growing in popularity, as is the use of personal multimedia players for viewing such materials, Barkley said the CIA’s free multimedia content available through Apple’s iTunes network has attracted more than 18,000 subscribers.

Jim Ulcickas, co-founder and a partner in Bluewater Grill, said he is not sure how employees at his company’s Newport Beach, Redondo Beach and Tustin restaurants feel about Waitrainer’s search-engine navigation, but he nevertheless is sold on the subscription service.

Bluewater Grill uploaded to Waitrainer, for conversion to a Web format and online storage, all of its existing policy, procedures and operations material, which were mostly in Microsoft Excel or Word formats. Once its information is available online, Ulcickas said, additions and changes can be made easily and quickly and employees can study the material and get tested on it at their own pace.

Ulcickas said it only takes minutes for his team to make changes and additions to its Waitrainer-hosted content, including the creation of tests and the introduction of new menu items with recipe details, serving and sales suggestions, and photos. Waitrainer’s Web-based and template-driven authoring tools and report generation makes the process simple, he said.

During the recent opening of the Bluewater Grill in Tustin, Ulcickas trained small groups of new employees by projecting policies and procedures documents stored online by Waitrainer onto a wall using a notebook computer with wireless Internet access and a digital projector. Afterward, the restaurateur said, he told trainees, “Here is your password and user name, go online and take the test.” If they don’t take the test, he noted, “you can see that in the [Web-accessible] report.”