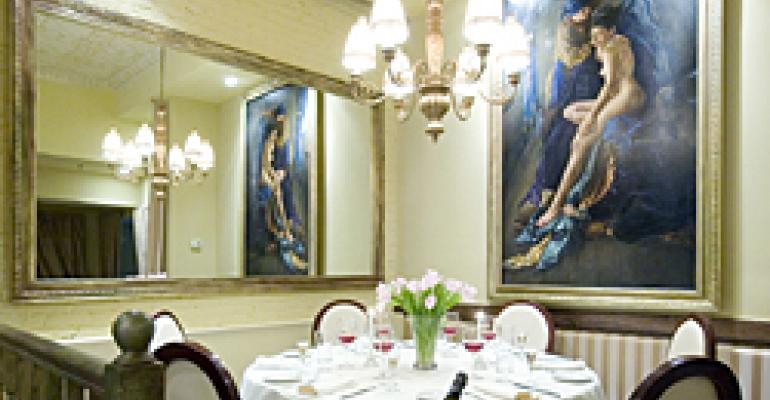 Determined not to let sky-high Champagne prices and consumer frugality take the air out of their bubbly business, some restaurant operators are guiding their guests to good, reasonably priced sparkling wines from less-heralded wine regions.

“Today you can walk into a store or into a restaurant and find a beer, a wine or a sparkling aperitif from any corner of the world,” said Todd J. Smith, wine director of Dosa, a new restaurant in San Francisco that showcases the exotic cuisine of South India.

He proves his point with Dosa’s eight-item sparkler selection, which has one choice each from Argentina, Spain, Germany, New Zealand, Italy, Australia, the Loire Valley of France and Champagne. Smith, who disputes the notion that only beer goes with Indian food, often suggests such wines with curries and similarly spicy fare. With each of the eight priced at less than $50 per bottle — the Champagne is a half bottle — patrons are taking him up on it, he said.

Included are 2005 Deseado Sparkling Torrontes for $30 per bottle, a sparkler from Patagonia, Argentina, with elegant fruit and a sweet mouth feel; Juve y Camps Brut Rosé, $39, from Spain, which has floral and berry nuances of Pinot Noir; 2004 Sekthaus Solter Brut Riesling Sekt, $40, an elegant and rich German bubbly with mild fruit and minerals and Bleasdale “The Red Brute” Sparkling Shiraz, $37, an unusual red sparkler from Australia with rich, dark fruit flavors and a crown of magenta foam.

“It’s nice to be able to offer some sparkling wines at fair price points, especially these days,” said Smith, noting that in many restaurants Champagne prices start at about $65 per bottle. One of his tips for bargain hunting in any wine region is to seek high-quality wine producers on the outskirts of prominent production zones, where overhead is lower. “If you move away from the areas of soaring real estate, you can get a lot of the same soil types and microclimates and find great deals,” he said.

Italy produces sparkling wine throughout the country in an array of styles, quality levels and price points. In recent years, the lively, charming and relatively affordable Prosecco from the Veneto region in the north has caught on with Americans. Few places promote it as eagerly as Prosecco, a white tablecloth Italian restaurant in Chicago that takes its name from the wine. Now a year old, it has won a following with its authentic regional Italian cooking and enthusiastic wine merchandising, according to managing partner Kathryn Sullivan Alvera.

That’s clear right from the start at Prosecco. As soon as guests are seated, a server offers a gratis pour of its namesake wine. “Everyone clinks their glasses and the experience is off to a good start,” said Alvera.

She and her fellow managing partners, Stefania and Mark Sparacino, the latter being the executive chef, share a love of Prosecco and Italian sparkling wine in general. They believe that the best examples stand on their own merits, not merely as cheaper alternatives to Champagne. “We believe it doesn’t get its proper due,” said Alvera. “It represents tremendous quality and value, although people aren’t always aware of it.”

The restaurant’s selection of 50 Italian sparkling wines includes Mionetto Brut Prosecco, priced at $39 per bottle, and a rare sparkler from Sicily, 2004 Scammacca Bianco Di Nerello Mascalese Brut, $54. For customers who desire the complex nutty, yeasty nuances that noble grapes and a second fermentation in the bottle create, a process known in France as the methode champenoise and in Italy as the metodo classico, Alvera looks to the Franciacorta zone of Lombardy, where 1994 Ca’ del Bosco Brut Dosage Zero, priced at $109, is a favorite.

Sparkling wine flights are a hit at Bardeo, a wine bar and restaurant in Washington, D.C., one of the six Knightsbridge Inc. operations there. Sommelier Brent Kroll offers the Sparkling Styles Flight, which has examples of Prosecco, Cremant de Bourgogne, a Champagne-method sparkler from Burgundy and Champagne and the Blush to Red Sparkling Flight, with Prosecco rosé, Cava rosé and sparkling Shiraz, each in half-glass pours.

Each flight is priced at $15 and discounted to $10 during a Happy Hour that runs weeknights from 5 p.m. to 7 p.m. “People seem to really enjoy themselves when they sit down to a flight,” said Kroll.

He added, “You might think with that many bottles open, once in a while, you’d have to toss a bottle. But we just don’t have that problem, because it’s so successful.”