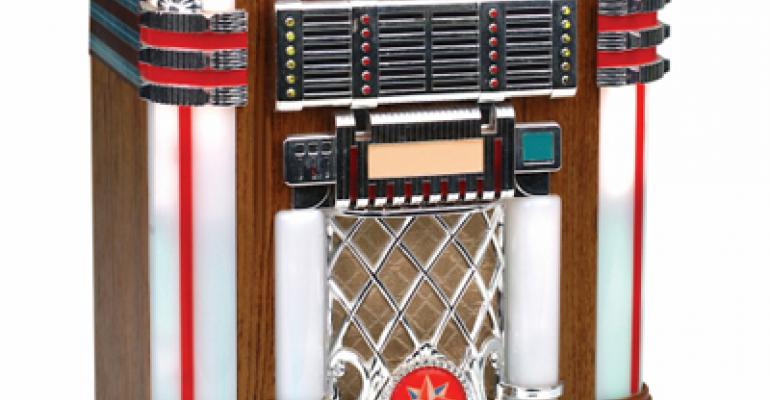 Operators in the mood for music

Quaker Steak & Lube, or “The Lube” as its fans call it, is looking to grow from its base of more than 40 chicken wing restaurants with several store prototypes, and music will be a key detail in restaurant design plans going forward.

By paying attention to an element of restaurant ambience that many operators overlook, The Lube hopes not only to provide the right atmosphere, but also to influence the way customers feel inside the restaurants while encouraging them to spend a little bit more.

More foodservice operators, in fact, are discovering that in-house music helps them to discreetly shape the guest’s overall dining experience.

“The people from our provider told us the way music is arranged, it can help increase sales, and that was the buzz word that got us interested,” said Bob Mentrek, senior vice president of promotions and marketing for Sharon, Penn.-based Quaker Steak & Lube. “It can put people in a more relaxed, calmer frame of mind and get them to spend more.”

“Lunch and dinner are going to have different playlists, and late night will have music different from those,” Mentrek said.

He added that The Lube is trying to revitalize its late-night business to bring about a 5-percent increase in its beverage mix to 25 percent of sales. To create the right atmosphere throughout the multiple bars and patios at nearly every Quaker Steak restaurant, the right music is crucial, Mentrek said, which is why outsourcing the playlist creation to experts makes the most sense.

“This is a whole new advanced area that we think is going to be a component of moving the needle for us,” Mentrek said.

“Very frequently, especially when a remodel program is done in-house, the background music and ambient noise don’t get the attention they deserve,” Lombardi said. “In many cases, the system is not upgraded and not well managed, and there’s not a lot of consumer research done on what they like or dislike.”

The value of music

Nick Vojnovic, president of four-unit fast-casual chain Little Greek, said he had not considered the value of background music until a National Restaurant Association meeting decades into his restaurant career, where an executive of The Cheesecake Factory discussed how important music was to the restaurant’s décor.

“Music is such a crucial part to the everyday restaurant experience and so overlooked for branding,” Vojnovic said.

Prior to buying the Little Greek brand earlier this year, Vojnovic had been president of casual-dining chain Beef ‘O’ Brady’s. He also started out in the Chili’s system years ago, when the instrumental background music tapes in each restaurant were changed only once every quarter.

“Restaurant folks like us, we’re into food and we’re into service, so music is something we never think about,” he said. “At Beef ‘O’ Brady’s, our background music was ESPN on the TV, and it created no energy. Some franchisees started playing DirecTV music channels, but if they had bad weather they lost their music along with their TVs.”

Lombardi said music could be a complementary tool for speeding up table turns during a busy lunch or promoting lingering between dayparts, but it likely will not be the only, overwhelming factor.

“If I want to linger at a table because I’m tired from shopping nearby, the music won’t have the same impact as the comfort of the seats and how the seating is designed,” Lombardi said. “It’s not something that will make an overwhelming change, unless of course you use music as a filter for customers. Some retail chains use it as a barrier against baby boomers, who don’t find a certain type of music inviting, especially if it’s played loud enough.”

Some restaurants prefer to pump up the volume, not to alienate certain groups of customers but rather to stay true to their core guest, as is the case with Emeryville, Calif.-based Freebirds World Burritos. Jeff Carl, chief marketing officer of parent company Tavistock Restaurants told a panel at last spring’s National Restaurant Association Restaurant, Hotel-Motel Show in Chicago that loud classic rock blaring in the restaurants was very appealing to the college-age customers that frequent Freebirds.

However, Vojnovic of Little Greek preferred a more understated use of music to nudge customers in the direction he would like.

“Everything in our industry is getting so competitive in terms of food and service,” Vojnovic said. “Really subtle things can put you ahead of the competition, and music is underappreciated in that. Savvy operators should look at it carefully.”